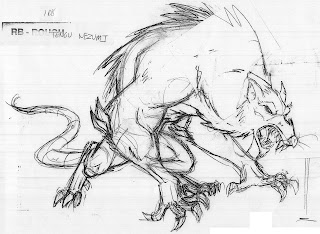 
Haven't heard from you yet about whether or not my "Hun and Gabageman are brothers" idea made you hurl, but I still like it, and have thought about it a little further.


It might be even more interesting if Garbageman was NOT originally deformed or crippled at birth, but something happened to him along the way -- and that something was CAUSED by Hun in some fashion. So not only is Hun embarrassed to have this crazy nutbag for a brother, but he's also wracked by guilt over the fact that something he did or let happen is at least in part responsible for who and what Garbageman is now.

"CHIKARA
Strike me with all of your strength.
ON MIKEY, hesitant, awkward and fidgety.
MICHELANGELO
Er… do I have to?  It’s just that… you know… you’re a… um, girl."

All of this "you're a girl" stuff just seems sexist, cliched and silly. Mike already knows that these Ninja Tribunal characters are extremely powerful -- I mean, moments ago he watched Chikara shatter a huge boulder with a palm strike! For him to be reluctant to strike her -- at her command -- because "she's a girl" is just downright DOPEY (especially when you consider that the Turtles have fought other powerful females before, i.e. Karai). His reluctance MIGHT work if it was because either (a) she's one of the "Good Guys", or (b) he's scared of her, or (c) some other reason I can't think of right now. Or maybe this whole lame gag should be dropped.

"WIDE ON THE PLATEAU.  It’s over.  Destroyed Oni are everywhere, the once boulder strewn clearing now looking like a gravel pit.  The Acolytes stand in the rubble.  Raph, Joi, Don, Leo, and Tora are still standing.  Adam is down, Mikey is cradling his arm, and Faraji is getting to his feet rubbing his head."

I thought it might be cool if we do a quick thing of showing the Oni reassembling themselves from the "gravel" -- not to attack the acolytes again, but just to once more take up their positions on the plateau.


3.) The more I see the names the Turtles are called in this script, i.e. "Donatello Splintersson", the more I am unsure I like them -- they're sounding kind of Scandinavian or something. I'm not saying that this works perfectly, but might we think about giving them the "Hamato" name as we gave it to Splinter in the "Big Brawl" episodes, i.e. "Hamato Donatello"?

"KON (OC, CONT’)
The Avatar gives enhances each warrior, amplifying their strength and endurance, sharpening their reflexes and giving them the ability to perceive and battle on the higher planes."

I suspect that there is a typo here, and it should be just "enhances", not "gives enhances".

"CHIKARA
This is the warren of the Nezumi.
ON THE ACOLYTES, bunched together.  On one side, MIKEY is looking pretty freaked out, looking over his shoulder.
DONATELLO
Nezumi?  A rat?"

Does "Nezumi" mean "rat" in Japanese? If so, in this context ("the warren of the Nezumi") should it not be "rats" and not "a rat"?