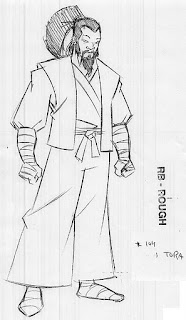 Attached are the following designs from show 104 for your approval:


If you could reply with your comments/ approval, it would be greatly appreciated.  A fax with these images will be on their way to you shortly.  Thank you, Peter, and have a great day.


I like all three of these sketches. I was wondering if we should try to do something with the Shredder helmet to differentiate each one, and one simple thing might be to give each one a different number of "spikes" on top of the helmets. In other words, our evil "original" Shredder would have the classic three spikes, but the other four Tribunal Shredders would have one, two, four and five spikes respectively. It might work!


Amazingly, I have but one comment on the Ep. 105 outline.

"ON THE SHIP – CAMERA PANS across the ACOLYTES:  Leonardo, Raphael, Donatello, Michelangelo and their human counterparts… Tang Soo Adam, Aikido Joi, Shinkendo Cha Ocho, and Shotokan Tora.  They all look grim as ship presses on."

Lloyd, I think you told me that the "Cha Ocho" name would not be used, and this may be a typo, but I thought I should point out that it is still in this draft.


Here's the outline for 106.  We're making tweaks, but we'd love your notes
too!


Here are my few comments (the first of the New Year!) on the revised outline of 106.

"Raph: “Dragon? Right, pull the other one it plays Jingle Shells.”
Donny: “Hisomi Shisho’s not being literal. It’s a metaphor.”
Mikey: “Uh, What’s a “meta FOR”?
Raph: “Meta –TATION, ya doof. Everyone knows that.”"

I hope that most of the above, with the exception of the second line, doesn't make it into the script. BAD dialogue.

" SHOTOKAN hisses at the Turtles for their disrespect. Raph gets in his face, “There’s possible, there’s impossible… and there’s nonsense. We don’t do nonsense. ”"


That doesn't sound at all like Raph. Or any of the other Turtles,
for that matter.

"Mikey tries to sing a lullaby to the dragon as he dodges claws and bursts of flame-- but a fireball takes out the wood beneath Mikey’s feet! He barely catches onto the bridge with his TOES, holding on for dear life as the dragon closes in! "

What's up with Mike trying to "sing a lullaby to the dragon"? VERY silly.

"Leo “steers” the dragon by whacking it behind each ear, the way one would steer an elephant. He drives the dragon TOWARDS his brothers—


-- Weaving through the supports of the bridge as the Turtles leap at the last second, joining Leo. As they ride the dragon, their AMULETS gleam encouragingly--


-- until the dragon has tied itself in knots, entangled in the support cables of the bridge!"


This action is okay -- verging SLIGHTLY on the edge of goofy -- but it seems odd that such a fragile bridge would have support cables which could be used to so entrap a huge dragon.

"Again, Splinter protests, “They are not ready!” Juto calmly insists, “They have been CHOSEN. We must yield to destiny, Rat.” As the rest run off, Leo shoots his Master a sullen look, “Sorry, guess you were only right about ONE of us not being ready…”"

I don't quite get "sullen Leo's" line. What is he saying here?