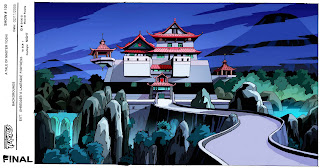 
Here are my comments on the Ep. 100 second draft.

"DONATELLO
Yeah, Leo, let’s hear about the Ancient One...!"

Don says "Yes", not "Yeah". But "Yes" would sound a little odd here, so why don't we keep this line as is and combine it with Raph's next line ("I want to learn about all the new ways you learned to kick butt") and make it all Raph dialogue.


2.) It's cute how Yoshi and Mash meet the Ancient One, but a little sketchy in the way the Ancient One decides to invite them to become his students of ninjitsu just because Yoshi returned a five yen note to the Ancient One. I wonder if it might be fun to stretch this scene out just a bit to include some display of physical prowess (flexibility, speed, agility, whatever) in addition to honesty on the part of Yoshi.
I think we also miss an opportunity here to foreshadow Mash's second string status. After all, it's Yoshi who returns the money. Mash is just there. Perhaps we could do something like this: The Ancient One looks at the slightly ragged Yoshi and says something to the effect that it looks like Yoshi could use a job/money. He tells Yoshi to follow him. Yoshi starts to, remembers Mash, asks the Ancient One if his friend can have a job too. The Ancient One pauses, looks at Mash, shrugs in agreement.

"CUT forward in time to show the two boys, now about age 16, hunkered up close to a black and white tv with the Ancient One, watching the first astronaut step out on the moon (1969).  The boys are quite excited, the Ancient One not so impressed.
YUKIO MASIMI
Wow, Yoshi, a man walking on the moon!
HAMATO YOSHI
Outer space... it is so fascinating.
THE ANCIENT ONE
Feh. "

It occurred to me that it might be fun to have the Ancient One say something to indicate that he thinks the moon landing isn't real (whether he REALLY thinks this, or is just saying it to hold up his "old curmudgeon" image for the boys, is not clear). It could be as simple as changing the last line as follows:


"THE ANCIENT ONE
Feh. Special effects."

"THE ANCIENT ONE
Good, you talk too much as it is.  Lunar eclipse much better enjoyed in silence. "

There's nothing wrong with this line. However, it occurred to me that it might be cooler if, instead of "lunar eclipse", the Ancient One uses some kind of more poetic/traditional description of the phenomena -- something like "dragon swallowing moon". I have no idea if there is such a term in Japanese mythology/astronomy, but if so, it could be fun.

"Mortu has an arm cut off by the (last) katana-wielding Foot Ninja.

I don't think Mortu needs to say anything here.

"WIDER to show Mash and Yoshi standing and facing the Mortu, unconscious Foot Soldiers strewn here and there.  Mortu stoops and picks up his severed arm and begins reattaching it (it is now more obviously not flesh and blood but robotic).


MORTU
Nothing that can’t be fixed."

Because Mortu's arm has been SLICED off by a katana, it is unlikely that he could simply reattach it (as if some screws had come loose and it had fallen off). Yes, it can be fixed, as he says, but it will require significantly more effort that simply screwing or snapping it back together. I would prefer that when he says this line, instead of trying to reattach it, he simply examines the cut end of it, then tucks the severed arm under his other arm.

What is it that Mortu is smoking? He's babbling. That's a lot to be read into a chance encounter. I would like to suggest an alternative close to this scene: Yoshi and Mash react in astonishment to Mortu's robot-like anatomy. Just then, four (maybe fewer?) Guardians arrive, prepared to attack Yoshi and Mash. Mortu stops them, telling the Guardians that these boys saved him from the Foot attack.. The Guardians apologize to Mortu for being late to the battle (they were assigned to protect him, but were delayed for some reason which we probably don't need to get into here). One of the Guardians realizes -- and points out -- that Yoshi and Mash have seen part of his true nature. What to do? Mortu says something to the effect that they can leave, and the two boys will be left with a small mystery and their normal lives... OR... the boys can enter the world of the Guardians and the service of the Utroms, and learn the whole story. It's their choice.

"Walking barefoot across a bed of red-hot coals but not feeling any pain."

I'd prefer to take this one out. It's been pretty well conclusively proven that the classic "firewalking" stunt, which is supposed to show evidence of some incredible psychic power/mind over matter ability, is actually feasible because of the insulating/heat conducting qualities of ash (or something like that -- I've read about it in a number of places). So to avoid any kind of cheesy phony mind power stuff, let's replace this with something else or just take it out.

Can we think up a different term than "Guardian Commander"? Nothing wrong with it per se, just thought something cooler and less military might be better. Maybe "Guardian Prime" or something like that.

"MASHIMI
You dare ask why, Yoshi?  Isn’t it obvious?  You have taken everything from me... beaten me at everything!  But with this betrayal..."

Because the best bad guys never really think of themselves as "bad", I question Mash describing his own actions as a "betrayal". I think he would use some other more neutral or even positive word.

"TIGHT on Yoshi, holding up and looking at Tang Shen’s purple chopsticks, a silent tear running down a cheek while his face is filled with silent fury."

I think it might be a good idea here to do a quick dissolve to an image of Tang Shen showing her wearing the purple chopsticks... just to reinforce the connection for the viewer. It would only take a second or two.


12.) I still think we need more foreshadowing of Mash's drift to the side of evil, i.e. the Foot and the Shredder. Perhaps a quick, wordless scene during or near the end of the "Yoshi rising in the Guardian ranks/Mash getting jealous" sequence that would go something like this: A bitter-looking Mash ducks down some dark alley in a seedy part of time. He leaps over a wall and drops into a leaf-strewn and weed-choked courtyard. Cut to him standing in front of a door... he knocks on it in a specific sequence of knocks... the door opens onto darkness, and Mash -- with a quick glance backward (symbolizing his last moment "in the light", as it were) -- slips inside. The door shuts, and we see that there is a weathered (but still legible) Foot symbol on it. (We couldn't see it a moment ago when Mash was standing in front of the door.)
The reason I suggest this is that in the script as is, the entry of the Shredder and the Foot into the story (via the Mash connection) still seems too abrupt to me.

"LEONARDO (V.O. NARRATION)
Mashimi’s words struck Yoshi with the blistering force of an atomic bomb.  Everything he cherished had been suddenly stripped away... leaving him blank... senseless... like he was filled with nothing at all.  Empty."

The atomic bomb reference is a bit over the top. Actually, this whole paragraph is over the top. I get that Tang Shen has been taken from him, and he's bereft about that, and also about Mash's betrayal... but EVERYTHING? I think this needs to be toned down a little.

I question the use of the word "machine" to describe Yoshi at this moment, because it seems to be the exact OPPOSITE of what he is here, which is a man driven by PASSION. Also,  I have to say that I'm not crazy about this "super Yoshi" who is single-handedly driving the Foot horde before him. I think it would work better if his inspired combat actions inspire the other Guardians and Utroms, and they rally around him.

Because we've already done an arm-severing in this episode, maybe instead Yoshi cuts off one of the Shredder's hands -- perhaps the one with the bladed gauntlet.

"YOSHI
I don’t blame you, sensei.  I blame Mashimi.  I will set this to rights or I will perish trying.
THE ANCIENT ONE
Perhaps more blood is not the answer.  More blood will not bring Tang Shen back.  More blood will only stain your hands forever."

I don't know if this will work, but I'll mention it anyway. What if the Ancient One uses a metaphor here to try to illustrate to Yoshi his point about vengeance? The metaphor is about a splinter... vengeance is like a splinter... it gets under your skin... irritating, torturing, getting infected and poisoning your life... unless you pluck it out (i.e. reject the way of vengeance). Yoshi goes ahead with his plans for revenge anyway, and kills Mashimi... but afterward realizes the truth of the Ancient One's words. And to forever remind himself of that sad lesson, he re-names his new pet, the rat which had belonged to Tang Shen... he calls it "Splinter".

"CUT back to the Shredder, quite pissed that things have once again gone awry.  (Without Krang around to blame) Shredder (instead) moves into position to stand above Mashimi (much like Yoshi had stood a few minutes earlier).
TIGHT on Shredder delivering a powerful downward death-blow at us (at camera).
TIGHT as one of Mashimi’s hands goes limp."

I wonder if it might make the Shredder seem more like a badass if he doesn't deign to execute Mashimi, but instead makes a small gesture to his Foot Elite... who close in on Mashimi... one of them raises a weapon... and brings it down.