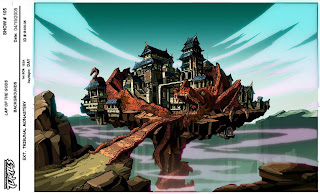 
Here are my comments on the Ep. 99 second draft.

"*SAVANTI ROMERO (VO, CONT’D)
But then four turtle creatures and that ditzy Timestress pulled victory from my grasp, allowing Simultaneous to exile me once more!"

I think "ditzy" is a little too modern slangish for Savanti. Maybe "foolish" or "idiotic" would be more appropriate.

"SAVANTI ROMERO
(laughing)
Welcome, turtles!  I’ve been expecting you!
ON THE TURTLES/RENET – their weapons out, looking up at Savanti atop the T-Rex.  Renet’s mouth is comically hanging open, and she’s wide eyed as she stares up at the dinosaur.
MICHELANGELO
I called it!  It was a trap!  Pay up!
*RAPHAEL
You got any of those potato chips left, Mikey?  It seemed to make your pet triceratops over there friendly enough…"

Raph's lines here, and the timing of them, seem really weirdly irrelevant to the action at hand. I'd take them out entirely.


Before I forget, here are the few notes I was typing when we met on Tuesday. Hope they're useful!


The Tribunal originally had five members. They fought a great evil together, but one of them was seduced by the power of that evil and betrayed the others... and he became the Shredder. (Note: the Shredder armor -- or variants of it -- were originally worn by the members of the Tribunal when they went into battle against evil.)


Over the centuries, the Tribunal contested with this Shredder and his descendants. Part of the price of the power that the evil one took on is giving up immortality (which the Tribunal members possess), so the Shredder must pass on his power and evil mind to a new candidate (carefully chosen) every hundred years or so.


The Tribunal fought with the evil one and his minions down through the  centuries, finally defeating him for good in early feudal Japan. The evil one was imprisoned in some fashion to be determined, and the Tribunal turned their attention to other matters.


Splinter is suspicious and mistrustful of the Tribunal, as their inattention to the evil of the Utrom Shredder led directly to the death of his beloved master Yoshi. And he is reluctant to let his sons go into deadly conflict just because the Tribunal says so.


What happens with the Ancient One? Perhaps he sacrifices himself at some key moment, perhaps substituting himself for Splinter (who had also decided to sacrifice himself, a big deal given that he has no great fondness for the Tribunal).


Perhaps the Turtles should not be the ONLY candidates that the Tribunal are testing -- but after a devastating preemptive attack by the evil one, they are the only VIABLE candidates remaining.
Posted by PL at 7:50 AM