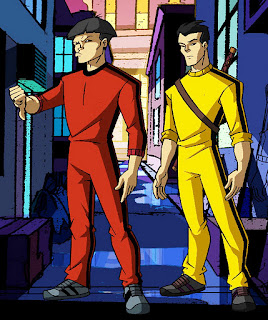 "ON THE TURTLES, looking up at the display.  There’s another display behind them, mostly vegetation and prehistoric bushes.
LEONARDO
Eeesh.  And I thought Raph was the ugliest relative we had.
RAPHAEL
Har-dee-har, Leo."

Leo's line here seems so not-Leo-like. Is he trying to be Mikey?

"*DONATELLO (CONT’D)
Anything we do could alter the future… we could unintentionally change our entire timeline!  We can’t leave anything behind, and we have to… ah… ah… AH-CHOOOO!
Don lets loose with another explosive <SNEEZE>."

I don't know if anyone else has already thought of this, but as I was reading this I thought it might be a cool nugget of an idea if the microorganisms in Don's sneeze (a byproduct of his "alien" ooze infection) have some repercussions, i.e. starting some kind of chain of events which lead to mutations of some sort -- maybe a hidden species of weird Cthulian-type creatures, or maybe mutated dinosaurs or something. Might be worth talking about.

"OTS TURTLES – as they watch the stampede fade away in the distance.  Leo turns to Don.
*LEONARDO
Stuffy nose, huh?"

Leo's line here had me scratching my head, trying to figure out what he was referring to. Then I looked back about FIVE PAGES to see that he was referring to Don's sneeze in the previous act. It's not a big deal, but it does seem kind of disconnected. As it is not a line which is necessary, maybe we should lose it.


4.) At least now I get how Mike has potato chips in the next espisode -- the Turtles are apparently still wearing their "human" disguises from their museum visit. I wonder how this is going to work, visually -- will they look dopey fighting dinos in these "street clothes"? And when are they going to get rid of the clothes?

I wonder if we are opening up a can of worms by having Splinter being aware of Utroms BEFORE the events of the first and second seasons. For some reason, this seems wrong to me -- it feels like it contradicts the continuity we've established. Maybe I'm wrong. In any event, perhaps we should do something to indicate that while Splinter DID see the Utroms back then, what he saw didn't mean anything to him (he was just a rat, after all) and he either forgot it or it never stayed long in his little rat brain.

"SPLINTER
Sashimi and sushi.  Fresh from the se-, er, sea."

The "fresh from the sewer" gag doesn't really work for Splinter. Actually, it's kind of weird -- is he actually suggesting that he caught this fish in the SEWERS? I think the lines are superfluous and we can avoid this problem by just taking them out.

"MICHELANGELO
I do!  I have a great story!  Did I ever tell you guys about the time I became the BattleNexus™ champion?!
WIDER to show Raphael bopping Michelangelo over the head with a chopstick.
MICHELANGELO
<BAP!>  Ow!
RAPHAEL
You maroon – we were there, of course we know the story!"

I think Raph's line could be more effective/funnier if it reflected the real reason why he's irritated that Mikey wants to tell that story -- not that he and the other Turtles were "there", but that Mikey has told that story SOOOO many times!

"LEONARDO
Well... I’d rather not.  It’s kind of personal.  (Beat.)  But... but the Ancient One did tell me an intense story about Master Splinter’s master, Hamato Yoshi."

I question the appropriateness of the word "intense" here -- it feels like it's telegraphing too much. Maybe "great" or "wonderful" would be better. Or maybe no modifier word is necessary -- after all, ANY story about Hamato Yoshi would be interesting to the other Turtles.

"The camera PANS swiftly away from the legs/feet and down the alley that the feet were just walking past and zooms in towards a kung-fu battle in progress: a NINJA GUARDIAN (MORTU) solo against six FOOT NINJA. The Guardian is getting his ass kicked."

I think I raised this question at the outline stage -- my understanding is that the Guardians were always all HUMANS, and while the Utrom Mr. Mortu has a human disguise, he is NOT a Guardian. In any event, it seems that for this scene it isn't necessary at all that the person Yoshi and Mash see being assaulted be a Guardian.

"LEONARDO (V.O. NARRATION)
At long last came graduation day.  Sort of.  For when it comes to joining the ranks of the Guardians one either passes... or fails.  You either make it or you don’t.
CUT to Mortu (now we can hear him clearly) and ZOOM in on him as he makes his announcement.
MORTU
...a group of most distinguished skill.  Amongst this class, though, only one of you has shown the skills and abilities, the honor and altruism, worthy of joining the Guardians.  Only one of you...
CUT to the trainees.  Yoshi is surprised but pleased, the other trainees congratulatory, smiling, slapping his back, but not Mash... Mash just glowers at the news.
MORTU (O.C.)
...Hamato Yoshi!"

This raises an interesting question. How do the Utroms deal with any disgruntled failures among these would-be Guardians? After all, they have revealed their alien nature to all of these Guardian candidates, which would seem to leave them very vulnerable to exposure.

"THE ANCIENT ONE
Feh!  Nothing good ever comes from love."


What a truly bizarre and unpleasant sentiment coming from the Ancient One! I thought he was wise.


8.) I'm pretty disappointed in the last half of this script, nearly everything from Shen's death on. Is it really necessary to have her dead body being carried around for a bunch of pages? And the connection between the Shredder and Mash seems very rushed, without any real setup. I also find it difficult to believe that Yoshi, for all his skill, can go up against the Shredder and kick his ass in the way he does here. And that fight with the Shredder seems kind of pointless, as the REAL deal here is Yoshi settling accounts with his ex-pal Mash. The way the Shredder is treated here makes him seem just like some other cannon-fodder villain.
I think this last half needs to be radically re-thought and restructured to make it more emotional and flow more logically. One thing I think would be a good idea would be to have Yoshi actually SEE what happens to Shen, instead of having it happen somewhere off screen, out of his sight. The way it is now just seems so unsatisfying and unconnected. And more -- a lot more, in my opinion -- needs to be done to show how Mash is connected to the Shredder, to show his gradual drifting away from the Guardians and Yoshi and toward the dark side.
There's also a problem with so clearly showing that Mash is not Yoshi's equal in the martial arts -- it sets up any battle between them being pretty one-sided (Yoshi will obviously kick Mash's ass). I think that Mash's failure to become a Guardian should not be the result of him being a lesser fighter per se, but more because of a failure of spirit... the same failure of spirit which allows him to be drawn to the "dark side".

"Meanwhile, Bishop learns through a disguised informant in the Foot organization that the Foot has in their possession an artifact that could hold the key to finally stabilizing his genetic experiments. His informant gives him all the information he could need: how to get it, how to use it once he’s got it, etc."

I'd like to know more about this artifact and how anyone could know that it might have the effect described. Sounds a bit iffy.
Even though the artifact turns out to be a dud/fake in Ep. 103, there should be SOMETHING which convinces Bishop that this artifact is the real deal... and part of that is establishing that the mysterious informant who is in contact with Bishop would be someone who would likely know this information (someone in the Foot Science division, perhaps?).

"But, he must have that artifact.  The Foot informant tells Bishop that necessity makes strange bedfellows and that the answer to his quandary will be presenting itself shortly…"

I assume this mysterious informant is talking about the Turtles. If so, how can he/she/it POSSIBLY know that the Turtles will become involved? (Having now read the premise for Ep. 103, I now know that the informant is one of the Foot Mystics. But the question still applies. Are we saying that the Foot Mystics can see into the future? That would seem to open up a big can of worms.)

"Then, Bishop examines the artifact the Turtles have procured for him.  He follows the instructions given to him by his mysterious Foot informant, only to have the artifact crumble to dust before his eyes!  He has been duped.  And, he is not happy about it."

I would think that part of the "instructions" would be something that requires that the artifact be destroyed/crushed/broken/burned/whatever, so that it is apparent that whatever power it once held to keep the Foot Mystics under control is now gone, due to whatever Bishop has done to it. And it should also be made clear that while what Bishop does to the artifact is no big deal, it was magically IMPOSSIBLE for the Mystics to do it -- which is why they had to manipulate the Turtles and Bishop into doing it for them.