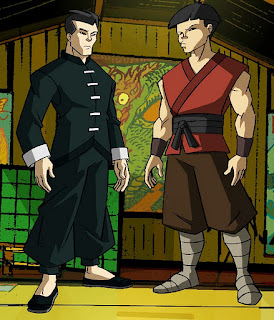 "The camera PANS swiftly away from the legs/feet and down the alley that the feet were just walking past and zooms in towards a kung-fu battle in progress: a Ninja Guardian solo against five Foot Ninja. The Guardian is getting his ass kicked.


MICHELANGELO (V.O.): “…they came across our old friends, The Foot, doing some nasty stomping.”


TIGHT as one of the Guardian’s arms is chopped off by a Foot katana blade! (No blood, though.) And with this little victory the five Foot get emboldened and thus move in for the kill."

Just for clarity -- the Guardians were/are HUMANS, not Utroms -- so, as we know from later on in this episode that this guy who gets his arm chopped off is actually the Utrom Mr. Mortu in an exoskeleton/disguise, maybe he should not be referred to as a "Guardian" here... or even LOOK like a guardian, just to avoid confusion.

"The man with the sunglasses picks up his arm and plans to reattach it.  You see, this is Mr. Mortu.  He reveals himself in his exo-suit to Yoshi and Mash asking if they would consider joining as Guardians.  He has been watching their progress for some time.  This must be fate that they would save his life in this manner."

Is it perhaps a bit too much that Mortu has "been watching their progress for some time"?
Also, maybe this reveal that Mr. Mortu does should happen in another, less public location -- perhaps he could gesture for them to follow him and he leads them to a secret "safe house" where he could reveal his alien nature. This might also be an excellent place to do a subtle little thing with how Yoshi and Mash react to the reveal -- i.e. both accept it, but Mash is just a LITTLE more freaked out/repelled by the alien Utrom.

This raises an interesting question: What, if anything, does the Ancient One know about the Utroms, and vice versa?

"And so Mash and Yoshi join the Guardians.  Taken to the Tokyo headquarters of the Utroms, Yoshi quickly rises in the ranks for his strong sense of honor and great abilities.  Mash’s jealousy grows; this jealousy is much less hidden than is what in its earlier manifestations/scenes."

I think this could be a great opportunity to show some scenes of the Guardians training with the Utroms and actually handling them -- i.e., as some of the Guardians did in the end of the "Secret Origins" story last season, carrying them to safety. This could be another way to show Yoshi's superior relationship with the Utroms and contrast it to Mash's slight -- but noticeable -- squeamishness.
And if we could get in here a training scene which involves water, that would be cool -- I see the Utroms as great swimmers (almost like l'il jellyfish), as I have shown in some of the Vol. 4 TMNT comics.

"The Shredder is held off long enough for the Utroms and the remaining Guardians to evacuate what they need from the building.  Yoshi is the last man on the transport (helicopter … i.e. last helicopter leaving the U.S. Embassy in Saigon, 1975).


The Utroms relocate their main headquarters to their secret satellite in New York, the TCRI building.  This now becomes their main hub.  Yoshi rebuilds the Guardians (hiring/training the Guardians the turtles met in earlier episodes)."

I wonder if it might be cool if we do a kind of trick here, by having this last helicopter appear to explode and take all the surviving Utroms and Guardians with it, so that the Shredder would be less likely to want to track them down (and thus possibly discover their NYC HQ earlier than we would like). It could be something as relatively simple as having the Utroms and Guardians bail out of the helicopter as it goes behind a building (out of the Shredder's field of view).

"Life is beautiful.  Life is wonderful.  Yoshi loves his pet rat and his pet rat loves him (perhaps because it is no longer being treated like a little baby… as it now trains in ninjitsu with Yoshi).  Tang Shen and Yoshi are very much in love (as we see in a beautiful, wonderful, very-much-in-love montage) … and at one point being watched by an angry Mash (at the end of the montage?)!"

Are we going to say anything about WHY and HOW Mash is in NYC and looking for Yoshi? Is Mash still hooked up with the Shredder, or is this something he's doing on his own?

"The Ancient One is clearly unhappy … but he bows (and, yes, farts*) as we fade away …"

I think we might want to lose this particular fart.


Here are my comments on the Ep. 98 first draft script.

"ON MIKEY and RAPH, smiling.
MICHELANGELO
Look, there’s a nerd-o-saur!
RAPHAEL
And I see a Geek-a-saurus Rex!
WIDE – April glares at the two of them, arms crossed.
APRIL
Oh, and you two are so super cool, with your comic books and fear of bugs.
BACK ON MIKEY and RAPH, no longer smiling.
APRIL (CONT’D)
Yeah, that’s what I thought."

I would take all of April's lines here out, not least because she's implying that comic books aren't cool! WHAT???!!! In all seriousness, her lines are superfluous -- I don't think Don needs her defending him here.

"SAVANTI ROMERO
And I am… but my magic is still strong.  Even across the curve of time, I can find you… and send you this message of your impending, inevitable DOOM!
ANGLE ON MIKEY, who turns to Don, then back to Savanti.
MICHELANGELO
Thanks?"

Mike's line is weak, unnecessary and not terribly funny -- I'd lose it.

"SAVANTI ROMERO
(laughing)
Should you wish to try and stop me, I’ll be waiting in the Ring of Fire…
WIDE - Raph LEAPS, sai out.  But just as he’s about to connect with the skull, it falls apart.  Raph passes right through landing on the other side as the bones fall to the floor."

Two things: First, it should be "try TO stop me", not "try AND stop me". Second, I think it would be cool if the phrase "Ring of Fire" echoes/fades as Savanti's spell dissipates.

"DONATELLO
This is incredible!!  Look at it all… look… there’s a brontosaurus!  A real, living brontosaurus!!"

Should Don instead use what I think is the current "correct" name for this dinosaur, which I believe is "Apatosaurus"?

"ON LEO, looking around as well.
LEONARDO
I know it’s not the city… but it’s REALLY quiet.  Everyone on your toes."

I don't get this first line from Leo -- the two halves don't seem to connect. I think we could safely lose it or both lines.

"DONATELLO
The deinonychus is one of the smartest of the dinosaurs… they’re fast, with powerful jaws… and they have a retractable sickle claw on their feet you have to watch for."

I don't think the claw in question is actually "retractable". Maybe a better way to put this would be as follows:


"DONATELLO
The deinonychus is one of the smartest of the dinosaurs… they’re fast, with powerful jaws… and they have a razor-sharp sickle claw on each foot."