Blast from the Past #315: Toy ideas from sketchbook

This is another page from the aforementioned sketchbook, and on close examination I find several things of interest. Basically, these are doodles and notes for toy ideas we would have sent to Playmates in a more coherent form. 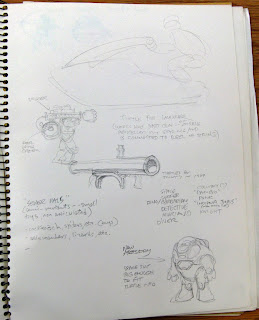 Of particular interest is the list of "Themes for TMNT's in 1989", about halfway down the page. Readers of this blog may recall the much-derided (unfairly, in my humble opinion) "Music Turtles" from a year or two ago. Well, look here -- we were thinking about music Turtles twenty-one years ago!

Of course, that COULD just mean it's a bad idea which doesn't want to go away, but I suppose we'll never know… unless Viacom busts out a whole bunch of musician Turtles in their new toy line!

Another thing of interest to me is that although this is a page from my sketchbook, apparently Kevin Eastman added some input to it. The handle of the Turtle "Fist Launcher" appears to have been drawn by Kevin, and that dark shading inside the muzzle seems to me to be one of his trademark drawing moves.

Also, I think he may have written in one or more of the "Themes" -- at the very least, the letter forms in the word "Diver" are very KBE, especially the inclusion of a lowercase "i". -- PL
Posted by PL at 5:23 PM