Some more stuff from that sketchbook -- these are my very rough thumbnail layouts (and some of them are, literally, about the size of a large thumbnail) for issue #15 of the original TMNT comic series.

It's interesting to look back at these and see just how much -- or how little -- I felt I needed to draw to get across to myself the idea of what was meant to be on each page.

I'm not sure when or why Jim Lawson drew his "Orson" character from "Bade Biker and Orson" on my layouts, but it's kind of funny to see him there. -- PL 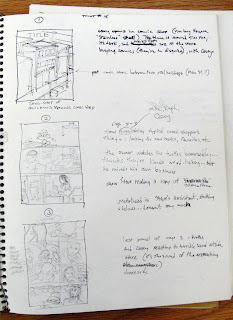 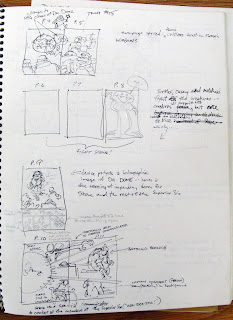 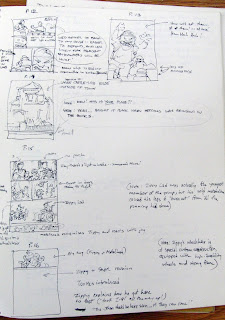 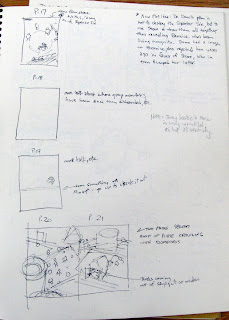 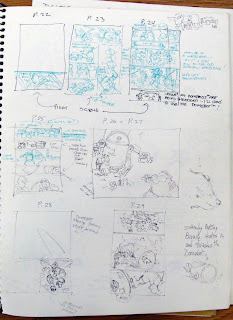 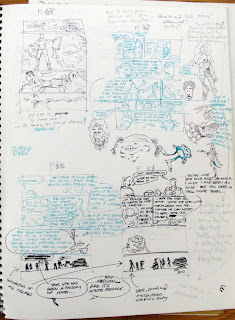 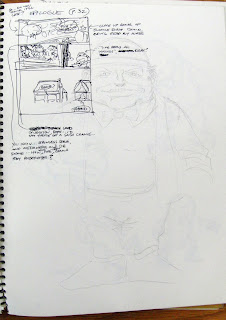 P.S. -- Apropos of some of the personal stuff I've been blogging about lately, as I was looking over these pages of thumbnails, specifically the penultimate page, my eye was caught by the dialogue I wrote for "Steve "Stainless" Steel's in his words to "Battling Bernice's daughter, Ananda:

"You're wise for your age, Ananda… I wish I had been as wise. But you need a few more years… to realize that it's never too late to change... as long as you're alive, there's hope…"

Not having the printed issue #15 here in front of me, I can't say how much of that made it into the final form of the comic, but I seem to recall I did have Steve saying something like that. -- PL

P.P.S. I also note that, according to these roughs, at one pint I had considered calling the Justice Force "The Superior Six". I have no recollection of why I didn't.
Posted by PL at 7:02 AM