Blast from the Past #307: unused story idea

This comes from the same sketchbook in which I found the material for the last "Blast from the Past" post, and I confess I have no memory at all of this idea. I do know that I never went forward with it. 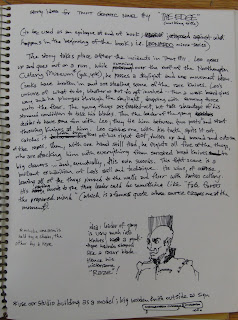 Given that my memory of this thing is nonexistent, I was a bit perplexed by the first few lines:

(to be used as an epilogue at end of book; juxtaposed against what happens in the beginning of the book, i.e. LEONARDO micro-series)"

After pondering it for a bit, I am left thinking that perhaps the graphic novel I was referring to here was one of the color reprints that First Comics published. I can't recall any other graphic novel projects proposed during that time, other than one which Kevin Eastman and I discussed at some length, featuring a story of the Turtles set something like twenty-five years in the future. But nothing came of that, either. -- PL
Posted by PL at 9:13 AM