One of the fun things I did at the New York Comic Convention back in April was taking a few minutes when there were no fans at our tables (something that didn't happen too often) to sketch out a large-ish drawing of Leonardo in pencil on one of the sketch pads I had brought with me. I thought it came out nicely, and I asked Dan Berger if he wouldn't mind inking it. Having a few minutes breather himself, Dan agreed. Here he is in mid-inking, hopefully not too irritated that I'm interrupting him to take the photo. 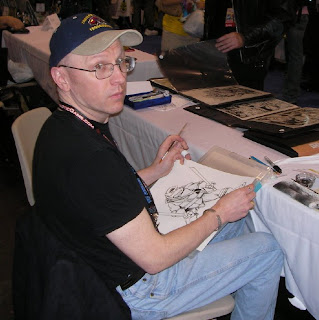 As I expected, the results were fantastic.


I was also lucky enough to have Steve Lavigne sitting right next to me. Steve had brought with him his "old school" coloring kit of Dr. Martin's Dyes, and agreed to apply his talents to this inked drawing of Leonardo. I think you will agree he did a great job!

I liked this so much that I made a limited edition print of it, and brought it with me when Mike, Jim, Dan and I did our signing appearance at the That's Entertainment! comics store in Worcester, MA last month. The print was quite popular, and it gave me an idea -- I should see if I could get Dan and Steve to collaborate with me on similar images of the other three Turtles. Happily, they were into it, and over the last couple of days I did these three sketches: 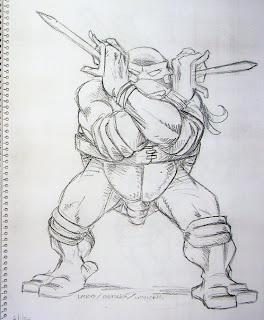 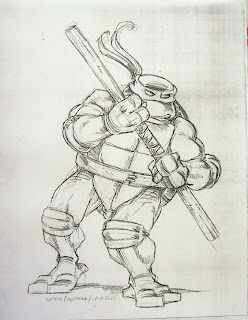 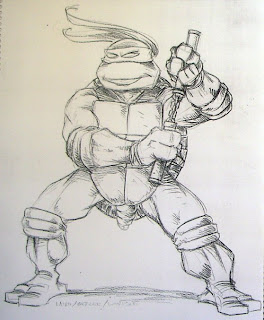 I handed them over to Dan yesterday, and when he has finished working his magic on them, they will be winging their way up to Steve in Maine, where he will complete the deal with his wicked good colors. And if we can get these things done in time, I will be making prints of them to bring with me when I go to the Heroes convention in Charlotte, NC in a few weeks. Cowa-freakin'-bunga! -- PL
Posted by PL at 7:23 AM