So we're back at our hotel after the second day at Heroes Con, watching out of our windows as a big storm lashes the city with heavy rain. (I'm glad we left the convention hall just as it started to sprinkle, and got in to the hotel before the deluge.) It was another good day -- lots of nice folks, plenty of signatures to do, hands to shake, etc.. I did quite a few head sketches, sold a bunch more prints, and today completely sold out of the twenty-five portfolios of small prints I made to bring here.

Here are a few images from today's show:

This is Jim Lawson working to uphold his "convention sketch hero" status. This incredible piece is something he just knocked out for the heck of it during a lull in the flow of people at our tables. 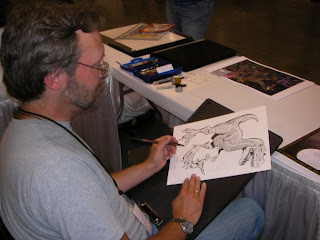 Mike Dooney is shown here carefully doing his precision inking on one of the several sketches he did of beautiful women from the comics. Mike brought with him a simply AMAZING sketchbook which he had completely filled with similar drawings in brush and marker. All our jaws dropped when we looked at this thing -- just gorgeous. I think about half of them have sold so far. I seriously doubt any will make the trip back to Northampton. 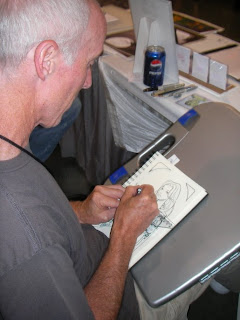 Here I am posing with this cool thing these two guys (whose names I forgot to get -- sorry, dudes!) brought over to show us. It's a mock-up of a package of "Kirby Krackle", made to look sort of like a box of cereal. Don't know what "Kirby Krackle" is? It's the name given by some afficionados of Jack Kirby's work for those "cosmic energy dots" that Kirby used to great effect to show the release of concentrations of vast power. These two gents were big Kirby fans, and it shows. 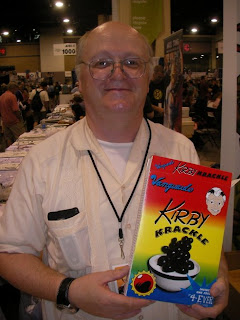 Here's Dan hard at work inking a cool drawing of Casey Jones -- I think Dan sold several similar drawings today, and the people who bought them got a GREAT deal. 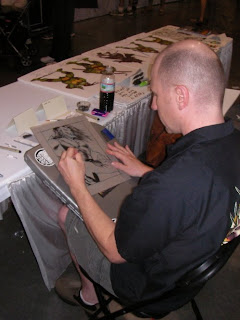 Eric is shown here finishing up one of his unique color pieces. He's the only one of us who is doing color stuff at the show, and today he and I sold several of our color TMNT head sketch collaborations. 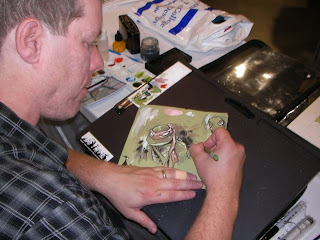 Finally, here's the whole group near the end of the day. Do we look tired? We were. -- PL 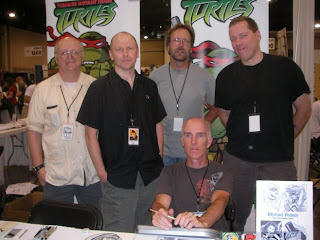