When I was working with 4Kids and Playmates to try to come up with a nifty logo for our 25th anniversary, I had the idea of taking the Turtles from the first two-page spread in the first issue of the TMNT comic (pages 2 and 3) and redrawing them in a clean, easy-to-enlarge-or-reduce form. Doing so required me to fill in some some details that were obscured in the original drawing, as in that work the four Turtles' figures overlapped at some points. 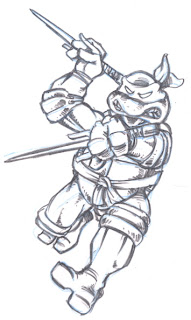 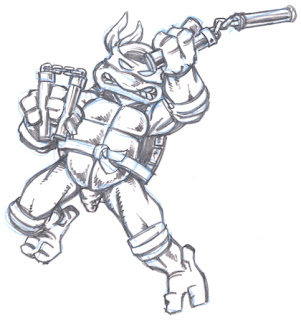 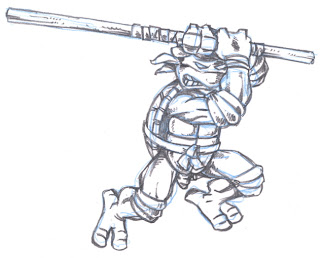 I'm not entirely sure if these are going to be used in any of the 25th anniversary stuff, but it was a fun exercise. Because I no longer draw the Turtles like I did when Kevin and I first published that book back in 1984, I had to adapt each figure a little bit. But I think I managed to keep the spirit of the original. -- PL
Posted by PL at 5:29 AM