Over at Ryan Brown and Steve Lavigne's "Cowabunga Cartoon Classics!" blog (http://lavignebrownart.blogspot.com/), I noticed a photograph of me and Kevin from the old days with a piece of art blown up in the background. There were some questions about what that art was, and I tracked it down... or at least one version of it.

My memory is a little iffy about the precise details, but I believe this is a piece that I penciled and inked, and then Michael Dooney did a painted version over my inks. Then I did my own color version (shamelessly copying Mike's beautiful rendering of the metallic reflections on the Fugitoid's body). I found this version in a folder of files I was originally going to put up on my "Blast From The Past" page on the planetracers.com website. 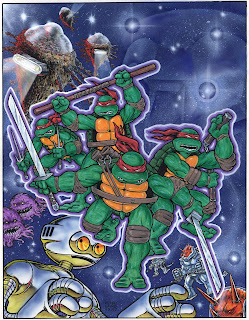 Why did I do my own version after Mike did his? I don't exactly recall. But in the notes I left in the folder in which I found this piece, apparently it was created as a cover for one of the First Comics graphic novel reprints of the old TMNT books... and was rejected.

In all honesty, Mike's version is the better of the two, and that's the one which was blown up in the background of the photo. If I can find Mike's version, I will post that as well. -- PL
Posted by PL at 9:04 PM