On pages 12 and 13 of this Kay-Bee sketchbook, I wrote down some notes on my idea for issue #12 of the Volume One TMNT comics. It was the first issue I'd worked on without Kevin Eastman's involvement, when we were taking a break from working with each other.

Here are the images of those two pages from the sketchbook, and the notes are transcribed below. -- PL 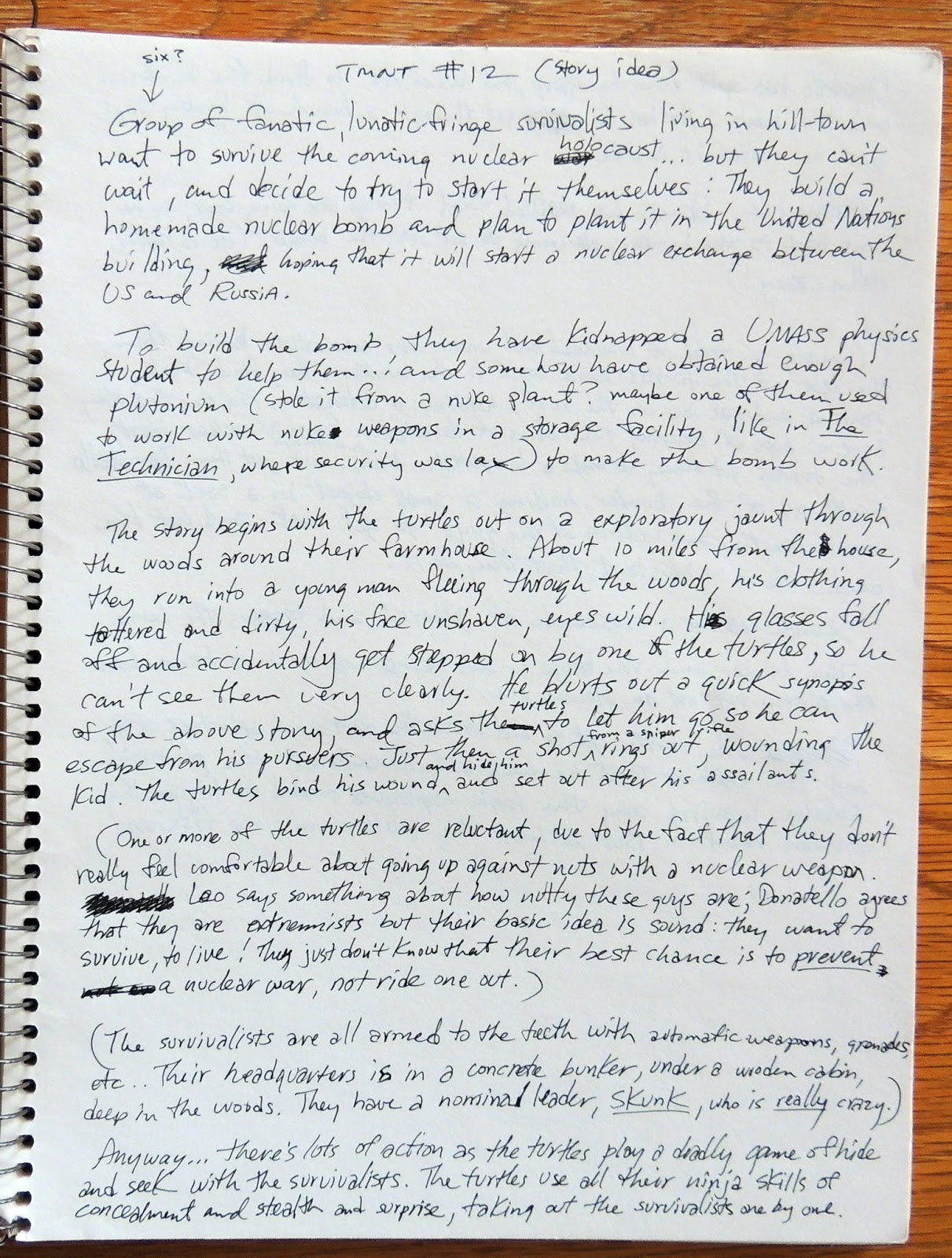 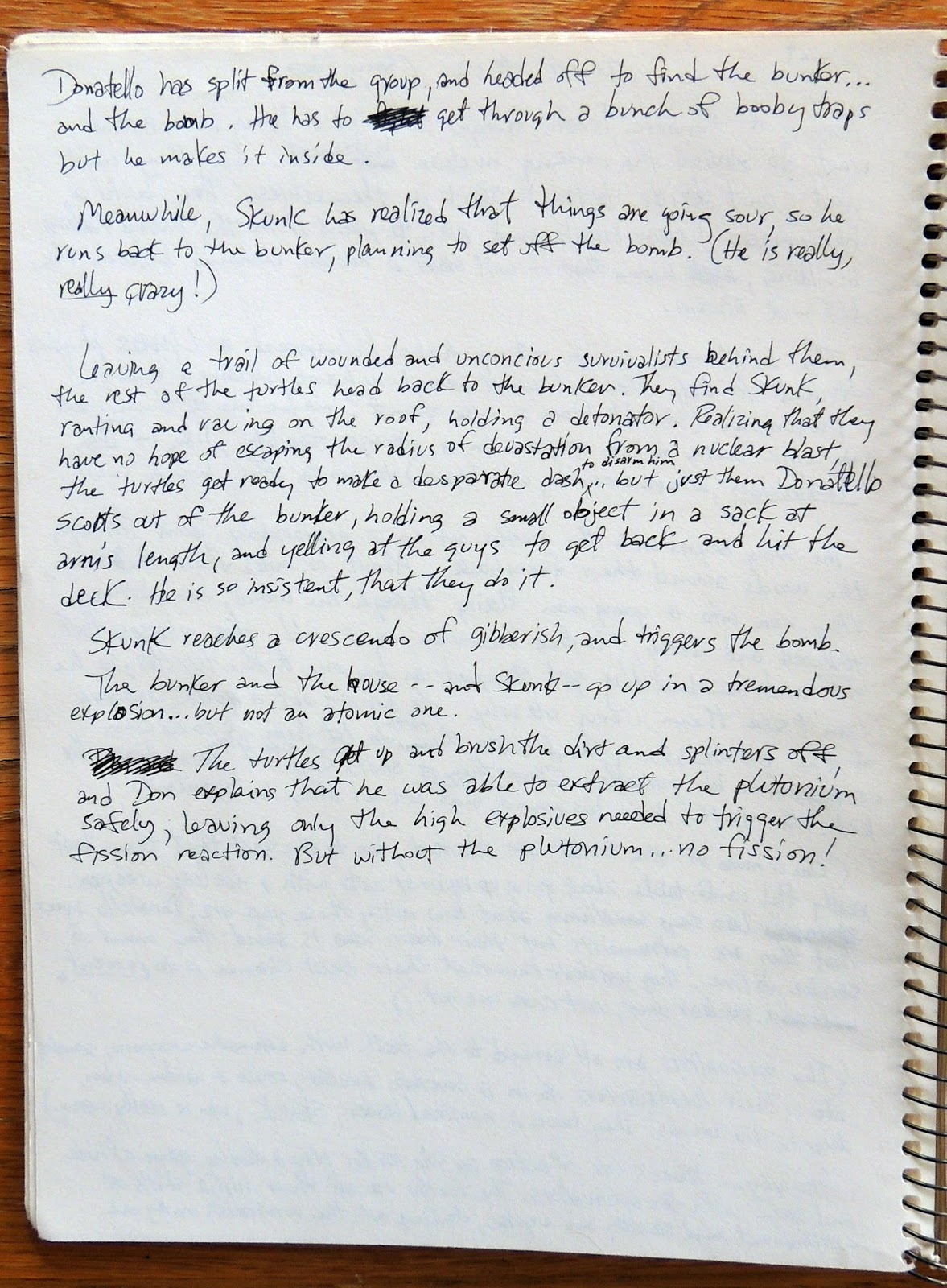 Group (6?) of fanatic, lunatic-fringe survivalists living in hill-town want to survive the coming nuclear holocaust… but they can't wait, and decided to try to start it themselves: They build a homemade nuclear bomb and pan to plant it in the United Nations building, hoping that it will start a nuclear exchange between the US and Russia.

To build the bomb, they have kidnapped a UMass physics student to help them… and somehow have obtained enough plutonium (stole it from a nuke plant? maybe one of them used to work with nuke weapons in a storage facility, like in THe Technician, where security was lax) to make the bomb work.

The story begins with the Turtles out on an exploratory jaunt through the woods around their farmhouse. About 10 miles from the house, they run into a young man fleeing through the woods, his clothing tattered and dirty, his face unshaven, eyes wild. His glasses fall off and accidentally get stepped on by one of the Turtles, so he can't see them very clearly. He blurts out a quick synopsis of the above story, and asked the Turtles to let him go so he can escape form his pursuers. Just then a shot from a sniper rifle rings out, wounding the kid. The Turtles bind his wound and hide him and set out after his assailant.

(One of more of the the Turtles are reluctant, due to the fact that they don't really feel comfortable going up against nuts with a nuclear weapon. Leo says something about how nutty these guys are; Donatello agrees that they are extremists but their basic idea is sound: they want to survive, to live! They just don't know that their best chance is to prevent a nuclear war, not ride one out.)

(The survivalists are all armed to the teeth with automatic weapons, grenades, etc.. Their headquarters is in a concrete bunker, under a wooden cabin, deep in the woods. They have a nominal leader, Skunk, who is really crazy.)

Anyway… there's lots of action as the Turtles play a deadly game of hide and seek with the survivalists. The Turtles use all their ninja skills of concealment and stealth and surprise, taking out the survivalists one by one.

Donatello has split from the group and headed off to find the bunker… and the bomb. He has to get through a bunch of booby traps but he makes it inside.

Meanwhile, Skunk has realized that things are going sour, so he runs back to the bunker, planning to set off the bomb. (He is really, REALLY crazy!)

Leaving a trail of wounded and unconscious survivalists behind them, the rest of the Turtles had back to the bunker. They find Skunk, ranting and raving on the roof, holding a detonator. Realizing that they have no hope of escaping the radius of devastation from a nuclear blast, the Turtles get ready to make a desperate dash to disarm him… but just then Donatello scoots out of the bunker, holding a small object in a sack at arm's length, and yelling at the guys to get back and hit the dirt. He is so insistent, that they do it.

Skunk reaches a crescendo of gibberish, and triggers the bomb.

The bunker and the house -- and Skunk -- go up in a tremendous explosion -- but not an atomic one.

The Turtles get up and brush the dirt and splinters off, and Don explains that he was able to extract the plutonium safely, leaving only the high explosives needed to trigger the fission reaction. But without the plutonium… no fission!"