Poking around in my studio a couple of days ago, I ran across a small stack of old sketchbooks. These were a common sight around the studio in the mid to late 1980's, with their yellow/brown covers and spiral bindings. I remember that I used to buy these quite inexpensively (the marked-down price on this one, as you can see, was just $1.99 -- not bad for a 100-page sketchbook with pretty decent paper) at the various Kay-Bee toy stores which could be found in a number of western Massachusetts towns, often in malls like the Hampshire Mall close by to us in Hadley, the Ingleside Mall in Holyoke, and a shopping center out in Dalton. 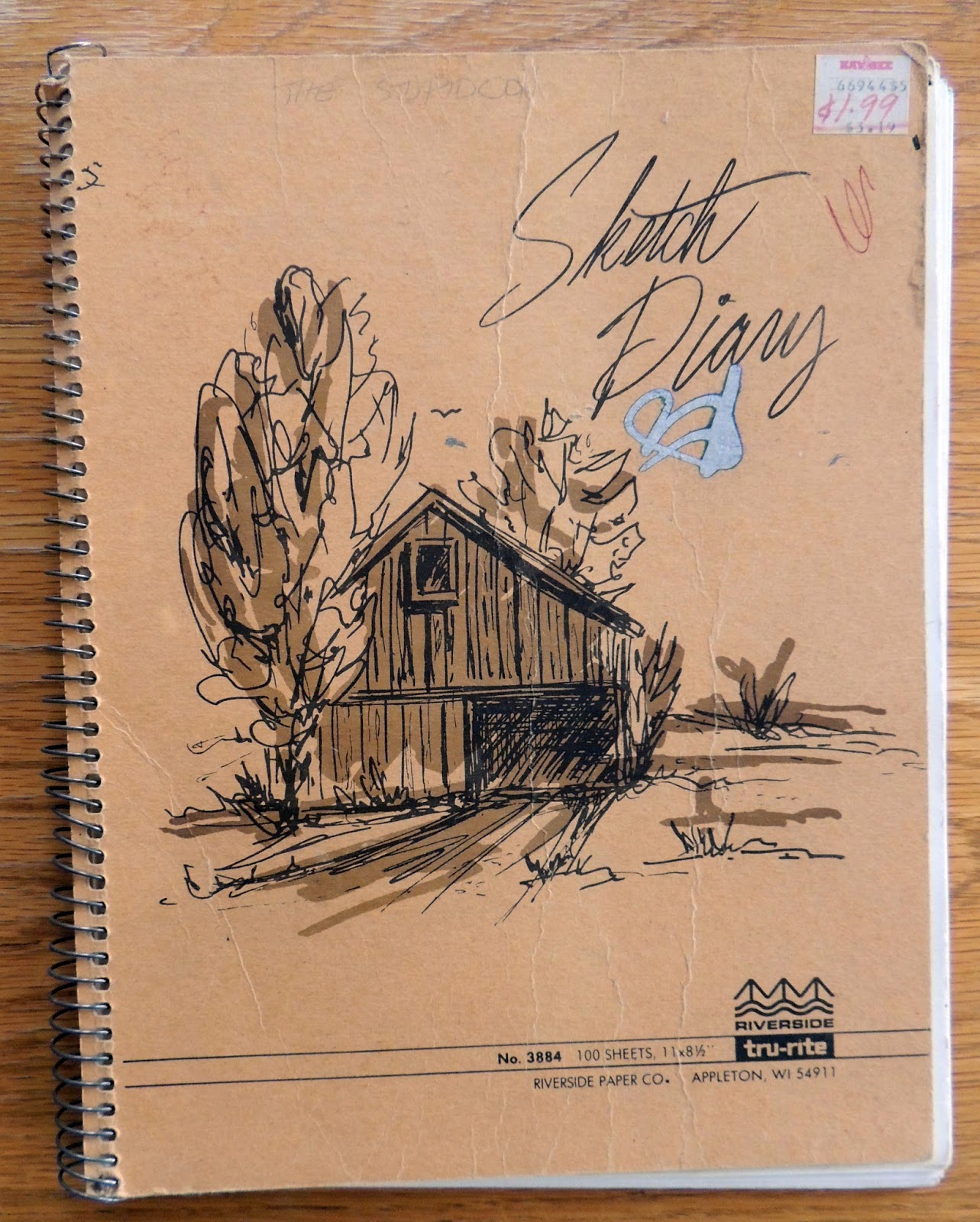 I think Kay-Bee was a locally-based chain of small toy stores, and as far as I know, they are sadly all gone now -- the victims of competition from stores like Wal-Mart and Target and stores of that ilk, along with online retailers. We -- me and the other toy-mad Mirage Studios guys -- often used to make trips out to the local Kay-Bee stores to see what was new in the world of toys. I always found it a little odd that they sold these sketchbooks, and always marked down, it seemed. (Side note: I am not sure where my first Turtle drawing is these days, but I am pretty sure it was drawn in one of these Kay-Bee sketchbooks.)

Only one of these five sketchbooks I found had anything drawn in it, though -- an assortment of rough mostly TMNT-related sketches and notes from the late 1980's. It's not quite as cool as the last sketchbook I found, as there are no finished drawings, and fewer drawings total, but there were several things of interest, including one brief note that cleared up a minor mystery about a panel in issue #4 of the first volume of the TMNT comics. (At least, it has been a mystery to me.)

Several pages were given over to handwritten story notes related to issues 11 and 12 of TMNT Volume 1, as well as a graphic novel idea -- or at least some musings about the setting for the graphic novel -- that Kevin and I had discussed but never got around to actually creating. I've transcribed these notes as best I could so that it will make them easier to read.

I think I might put up multiple pages at a time, instead of just one per day as I did with that last sketchbook. So here are the first couple of pages:

This first page has a loose pencil sketch of what appears to be a mutant warthog, wielding a spiked club. Was this an early design for the character Bebop from the first animated series? I'm not sure. 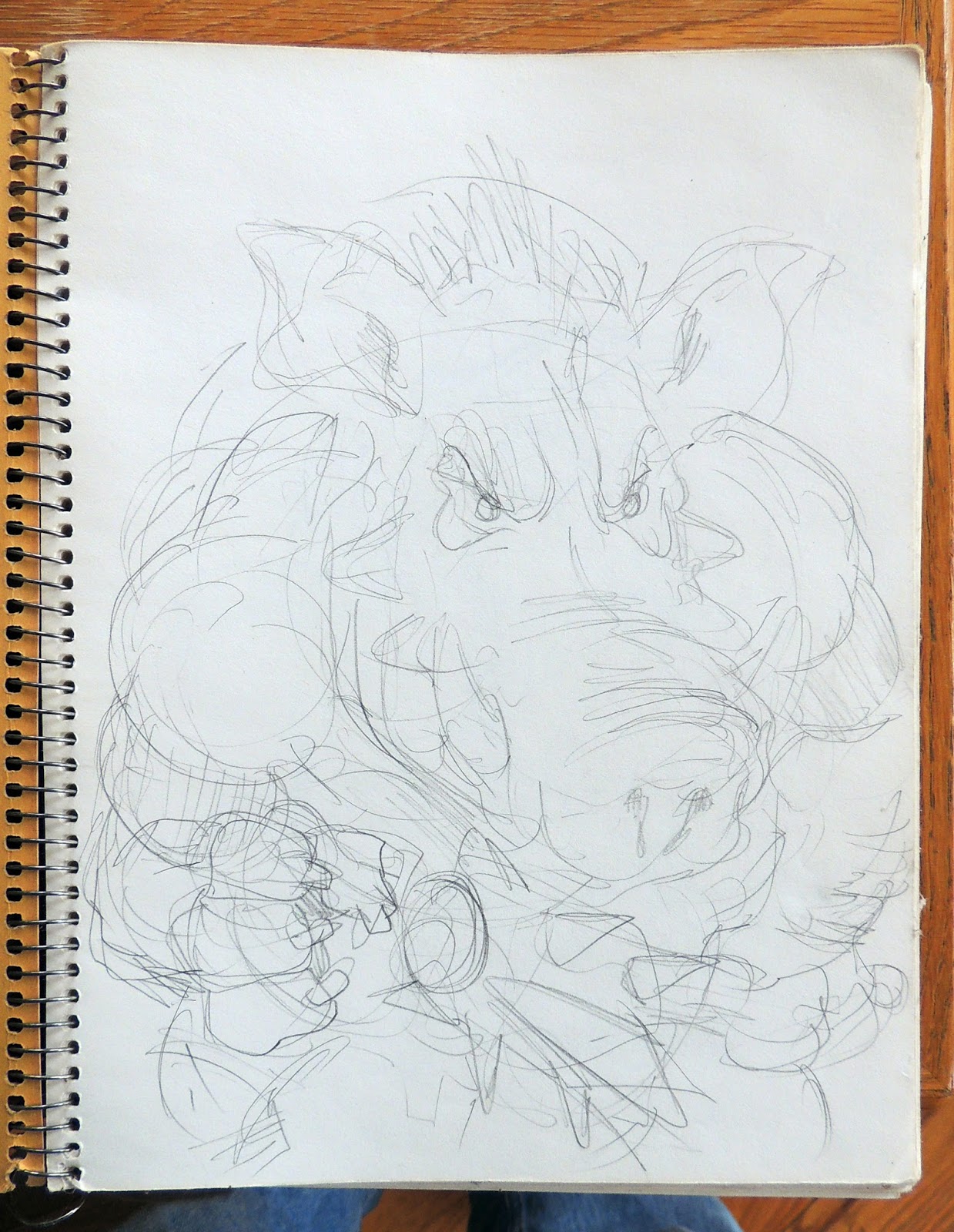 On the second page, there is just this single note, taking up only a small bit of space on the page. (I guess with these sketchbooks being so cheap, I wasn't worried about wasting space.) 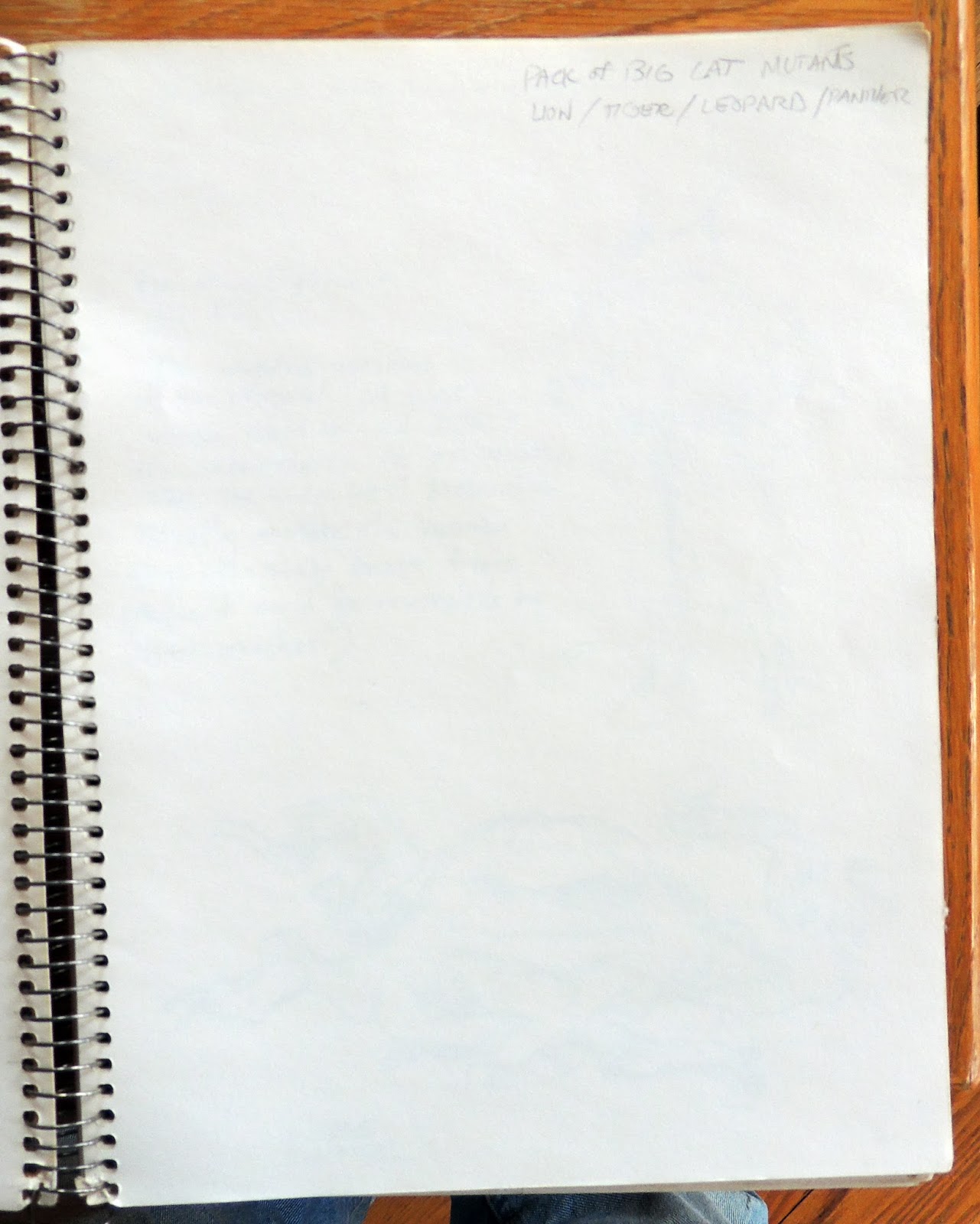 Clearly, this was a thought I had for what I considered would be a fun group of animal mutants. I still like it. A group of four big cat mutants could be a cool set of adversaries for the four Turtles.

On the third page, there is a somewhat heroic sketch of Splinter, with slightly silly-looking humanlike feet, with this note:

"Splinter - make him bigger, stronger -- to be leader?"

And just kind of hanging out there in the breeze is the name of Margaret Loesch, who -- if I am remembering properly --- was a TV executive that we (or, more accurately, Gary) dealt with back in the early days. I'm not sure why I wrote her name down here.

There is also the following note:

"For second phase of toy line:

Do mutated versions of the original bad guys which could be used with the Shredder's pit of mutating ooze. The kids could pretend to actually mutate the human guys into their beast forms. (Maybe it could be reversible by some process?)"

… and a sketch of a tentacled thing apparently labeled by me as the "sludge critter". Not sure what the story was behind this one, but I like the drawing. -- PL