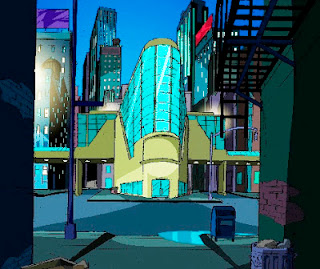 Here are a few comments on the outline of Episode 33:

1.) We may have already covered this, but I'll say it anyway -- when the Turtles encounter the Shredder in the "virtual past", I think it would be good to tweak that Shredder's armor/costume to be subtly (maybe a LITTLE bit more than subtly) different than the modern Shredder's outfit -- maybe a little bit more leaning toward the ornate Samurai look, but still recognizably the Shredder, with those key elements -- three-pronged/bladed helmet, hooked blades on shoulders, forearms, and shins, and hand blades. Not only would it fit more in with the historical context, but it could make a very cool toy! I also think we should consider doing something similar with the costumes of the Foot ninja in the "virtual past".

A Foot Ninja turns to his master.  Should they follow?

Feudal Japan Shredder:  "No.  The bamboo forest will give them too much of an advantage.  Let them go for now.  They are not the ones I seek.  Though … send some men to watch the road.  You others, come with me."

This scene seems wrong to me somehow -- I think it's because this "virtual world" thing is happening in the minds of the Turtles, so everything that WE see should be (I think) ONLY things that THEY see. The same idea would apply to the following scene on pages 5 and 6:

A road runs through the bamboo forest.  A family consisting of an old man, a young boy and a beautiful woman stand by the handcart they were pulling (a two-wheeled Japanese affair with a long extended handle in front).

Desperately, the old man and the boy stand back to back being held at sword point by five Feudal Foot Ninja.  The woman, however, is putting up a fight.  Three other Foot Ninja attack her with their swords flashing as she fends them off (quite well) with a walking staff (bo staff of sorts).

This scene could be altered to fit the "Turtles' point-of-view only" rule pretty easily, simply by starting that scene by showing the Turtles moving through the bamboo forest and THEN having them stop and see the attack on the handcart and its human occupants. Actually, the first questionable scene with the Shredder doesn't seem to be needed at all and could just be dropped.
A question -- is there any particular reason -- other than eye candy -- that the woman in this scene is described several times as "beautiful"?

Meanwhile back in the reality of the TCRI Building and the virtual reality pod room, Mr. Mortu and several Utroms, assisted by Professor Honeycutt, desperately try to figure out what’s gone wrong with the system.  But it is to no avail; it appears that all control overrides have been "locked out!"  They’ll have to try rerouting all controls.  It’ll take hours … and there’s a good chance it won’t work.

I have no problem with this, but I think it could be enhanced in terms of the sense of peril and difficulty if we take a page from other science fiction treatments of virtual reality stuff and also say that not only are they having problems dealing with the hardware, the fact that the Turtles' minds are now linked to this machine in intimate ways means that the Turtles are thus very vulnerable to any disruptions/energy spikes in the flow of data/sensations into their brains, and they could be harmed -- maybe even KILLED -- if the Utroms and Prof. Honeycutt screw it up. Sort of -- but not exactly -- akin to the old "If you're having a dream and you die in the dream, you can die in real life" bit.

Inside the TCRI building, Mortu gets the report: they’re under attack.  Yes, he figured that out by the ground shaking explosions and arms fire; they will simply have to trust in their defenses.  Right now, he cannot allow these turtles to perish no matter what happens.

Mortu pulls aside his assistant:  "Make ready the transmat and prepare the council for evacuation.  We may be forced to leave."
Fugitoid:  "Oh dear.  At least not until we free my friends here."
Mortu:  "Of course, Professor Honeycutt.  We will not abandon them.  I promise."

I think we need to remember that not leaving is NOT an option for the Utroms now -- they have been revealed (or at least their alien presence has been revealed, because of the weird transmat beam shooting out  of the top of the building -- even if nobody outside the building has acutally SEEN an Utrom in his or her true form), their facility is surrounded, and they HAVE to leave. We would benefit in terms of tension and drama to play this up, and Mortu's dilemma -- is the survival of the four Turtles of greater importance than the survival of all of the Utroms in the TCRI building?
Also, I can't remember right now how we had planned for this arc to end -- are the Utroms going to beam back to their home planet, leaving Earth forever (or at least until we want to bring the back)... or am I confusing the original comic story with the story we talked about for these episodes? If so, there is even greater jeopardy for the Utroms, who have FINALLY built their transmat, and it has come down to this -- that this is the ONLY time they can use it. Once those troops break in, it's all over for them... they won't be able to get home -- EVER.

5.) On page 9, in the scene where Mikey greets the other Turtles with the big meal, I thought it would be fun to have a little back-and-forth (maybe between Mikey and Don) about the fact that they're sitting down to this huge spread of food, and not a molecule of it is real!

As they begin to vanish, Leonardo calls out the Mortu, "What was it you were trying to tell us about the Shredder before..?"
Mortu begins to answer, "The Shredder is an…"

We flash and VR dissolve back to the TCRI building; it’s all over; the virtual pods open and the Turtles and Splinter emerge!  Safe and sound!  The Fugitoid, the Utroms and Guardians present are relieved!

But, when asked how the Virtual Pods malfunctioned like that, Mortu has no explanation as to how it could have happened.

"Oh, but I do!" says a sinister voice from behind them.

They all turn to see the real Shredder, still alive, surrounded by Foot Ninja, Elite Ninja, Tech Ninja, the Hun, and the robotic Baxter Stockman thing!

I know how Stockman got into the TCRI building, but what about everybody else? Did they just waltz in through the National Guard, police, firefighters and crowds of onlookers? Or is there some secret entrance we haven't seen yet, that perhaps Stockman discovered via his computer system infiltration and thus informed the Shredder of?

Closer on – Shredder readies his gleaming blades.  "The time has come to finally have the sweetest revenge upon my most hated enemies …"

The turtles get ready but …

I suppose you could refer to the race or group of Utroms as "the Utrom", although I have always when referring to them in the plural said "Utroms". I think perhaps we should follow my general rule here, because I think people might be confused that the Shredder is referring to one specific Utrom, as opposed to the group.

That's all I've got for now -- should be an exciting episode!