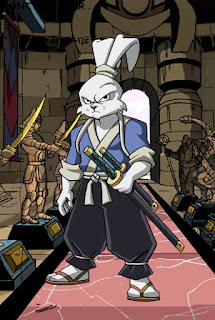 Hope you are well.

I was wondering if you thought there was any way we could get Usagi Yojimbo (Stan Sakai's rabbit samurai character, who has made appearances in our comics and in the original animated series) into the new show, maybe in the second season. I ask this without having made any overtures to Stan -- I don't know if he'd want to do it, but I suspect that if we treated Usagi properly, he'd be into it.

My immediate thought for how we would get this feudal Japan-era character to interact with the Turtles would be to send one or more of the boys back in time (or maybe back in time in another dimension, as Stan's world for Usagi is totally populated by anthropomorphic creatures, with no humans) to have an adventure with Usagi. Dovetailing with this idea could be the introduction of the character of Renet, the Apprentice Timestress (from issue #8 of the original Mirage comic series, as well as issue #7 of "Tales of the TMNT") -- something a lot of fans having been asking for. If we wanted to adapt the story from issue #8 (minus the character of Cerebus), it might be fun to work it up into a three or four episode story arc where the Turtles would be sent into other time periods/dimensions as a result of their interaction with Renet and possibly the villain from that issue, the sorceror/demon Savanti Romero.

Usagi could be introduced to our boys via that story idea I brought up when you were up here last to talk about the second season -- the "interdimensional martial arts tournament" thing. That actually might be the easiest way to do it.

So when are we going to get together and talk more about next season?

By the way, I just watched the rough cut of the sixth episode, the "sword of Tengu" one. Cool!

I notice that this and your last email have been sent from a new email address -- should I start using that one?

I read through your "rough and ready" outline and have some comments... most about 6 and 7, which you've already noted aren't quite complete yet. I'll separate my comments by episode.

1.) You mention that the Turtles learn from Honeycutt about the "plight of robots on this planet (think Magnus Robot Fighter)" -- are you referring to the idea as put forward in both FUGITOID and TMNT that robots have no rights and thus Honeycutt, in Fugitoid form, is vulnerable? If so, I think we intended that that was a situation which prevailed on nearly all civilized worlds, not just on D'Hoonib.

2.) You mention that Honeycutt has developed a "trans-dimensional" transportation device. Was this intentional? The transmat as conceived in the original comics was not an inter-dimensional transport, but only an interplanetary or intergalactic transport. Curiously enough, I have introduced the concept in the new TMNT comic series that the transmat technology, when tweaked properly, MAY have interdimensional capabilities, which may figure into future storylines. Is this something you are also thinking about?

3.) I love the "sewers of the future bit" (even if REALLY they are the sewers of the present -- just on a distant planet) -- I think it offers a lot of opportunities to do fun stuff.

"Turtles in Space Part 2 -- The Trouble With Triceratons":

1.) The following is text copied from an email I sent to Vinnie at Playmates recently, regarding the aerial battle between the Turtles in their stolen aircar and the Triceratons in their flying rigs:

"I have another question, this one related to second or third year TMNT toys. Something I've always hoped to see as a toy is the Triceraton Flying Rig, seen in issue #5 of the original Mirage TMNT comics, used by the Triceraton commandos in their aerial pursuit of the Turtles. I've always thought the design of it was cool (in the interest of full disclosure, I designed it!) and think it would make a very cool toy -- lots of play value! It could be designed to accept nearly any of the figures in the TMNT line, not just a Triceraton.

I'm hoping -- expecting, too -- that this hardware will show up in the next season of the show, probably in one or more of the first few shows, when the Turtles have their space adventure. I think the sequence in the original comic where these vehicles are featured will PROBABLY make it pretty much intact into the show. That sequence goes basically like this: Triceraton Shock Commandos assault a bar where the Turtles and the Fugitoid are hiding. They steal the Fugitoid and take off, three of them on their Flying Rigs. The Turtles commandeer a beat-up little speeder/flyer and pursue the Triceratons, which leads to the Triceratons on their Flying Rigs engaging the Turtles in an aerial battle which ends with the Turtles' vehicle crashing. (I'll attach a scan of one of the pages from this sequence.)

I was thinking that it might also be fun to devise a one-man (or one-Turtle) flying rig which could detach from the speeder to do individual battle with the Triceratons -- which would provide us with a neat opportunity to do a set of good guy/bad guy vehicles, maybe with special figures -- one Triceraton, one Turtle -- packed with their respective vehicle."

This was actually inspired by your comment some time ago that the aircar that the Turtles commandeer reminded you of the old Fantasticar from the FANTASTIC FOUR!

1.) I think it would be cool and demonstrate a previously-unseen part of the Turtles' ninja training to do the bit from the comics where they survive the nearly-airless conditions in the spaceship by using meditation techniques to radically slow their breathing and metabolism. Also, when the Turtles get to the Triceraton homeworld, should they be using the breathing apparatus we gave them in the comics (because of the different atmosphere)?

2.) I think the gladiator stuff works well, and I kept thinking of that great FF story arc where the Thing is captive of the Skrulls (I think) and has to fight Torgo in the space arena. Cool! It might be neat to have another gladiator who is a type of alien turtle (looking much different than our boys, of course)... maybe Mike could have a few funny moments with it.
The thing with Rynokk works, but I think it might be a good idea to have him get some kind of comeuppance after he betrays the Turtles to the Triceraton guards.

3.) In the scenes with April and Casey back on Earth, I think it might be fun to use those moments to also develop their relationship.

1.) I was a bit taken aback by the idea that the Triceratons the Turtles eventually fight in the arena are gladiatorial slaves like the Turtles (Kevin and I originally intended that those Triceratons were more like popular sports figures, a government-sponsored team), but after I thought about it it made sense. The original way also works, but this could be cool... I guess it's more like the original Roman gladiatorial games, where they were all slaves, essentially.

1.) I'm a little uncomfortable with the idea of Honeycutt somewhat casually building his transmat machine and then using it to beam himself, the Turtles, AND the machine itself away. For one thing, how does he know where to send the Turtles? And there's something about using the Transmat to transmit itself that makes my brain hurt. I think it might be a good idea to have that idea be one that they consider but reject for various reasons -- OR -- that they try it, but it fails at the key moment (I'll get to that in a bit). OR... just prior to their making the decision to try this crazy scheme, we could have a cool dramatic bit where Honeycutt, realizing that his mind (now trapped in the Fugitoid's robot body), with its knowledge of transmat theory (in fact maybe part of the tension in this "crazy idea" bit is that for Honeycutt it IS still a theory -- he's never actually BUILT a working transmat!), is too dangerous to the galaxy to remain in existence -- and he asks the Turtles to use a Triceraton blaster to melt him into slag... and we could have a bit of conflict among the Turtles, where Leo is appalled, Don -- who sees the catastrophic potential of the transmat in the Triceratons' hands -- is reluctantly in agreement, etc...

I would prefer to use the escape bit from the comics -- where the Utroms, whose transmat back on Earth contains the coordinates of where the Turtles were beamed into space -- unexpectedly rescue the Turtles and the Fugitoid (as well as take several Triceratons). I think it could be a good bit if we did something where the Turtles and Honeycutt have built what they think will be a working device, and they activate it just as the Triceratons arrive... but it fizzles and doesn't work! Our heroes are then just about to be blasted by the Triceratons... all hope seems lost-- when suddenly the Utroms teleport them all away.

"Turtles in Space Part 6 -- Everything You Always Wanted To Know About Utrom But Were Afraid To Ask": (wacky title!)

1.) The inclusion of the Shredder in this and the following episode seems forced and somewhat without point... and I have to say a had a "Fred Wolf moment" when reading the parts about the Shredder bickering with a disembodied head  (sounded WAY too much like the Shredder and Krang from the old series). I think we need to discuss in great detail what the hell the Shredder has been up to since we last saw him... and I don't see why he would want to have ANYTHING to do with Baxter Stockman, who not only betrayed him but tried to kill him! I would think that these two are sworn enemies at this point. My gut feeling is that the Shredder needs a much more dramatic way of returning -- not sneaking around the TCRI building and planting booby-traps.

2.) If we MUST include the Shredder in this tale and he MUST sneak into the TCRI building (and I'm not at all convinced that it's a good idea), maybe he should use the devices that the Foot Tech Ninjas wore that rendered them invisible.

3.) The reveal of the Shredder as an Utrom seems to come too early in my opinion. I think this is something that could wait until much later in the season, and they also learn about it a really casual way -- there's no drama to the reveal.

4.) I would much prefer -- unless you present me with compelling reasons to feel otherwise -- to leave the Shredder and Stockman out of this story and maybe even wrap up this arc in this episode, using the assault on the TCRI building by the National Guard and police to provide the action and tension.

"Everything You Always Wanted To Know About Utrom But Were Afraid To Ask" Part 2 -- The History of the Shredder:

1.) This one is so rough I don't know that it makes any sense to go into it, but in brief I'm still not groovin' on the inclusion of the Shredder and Stockman's head... in large part because the Shredder's actions seem kind of small and petty (he sets a bomb to blow up the Utroms). And I just remembered another question: How is it that the Shredder now knows that his "ancient enemy" is in the TCRI building?

I have to go out now, do some stuff, and pick up my daughter early this afternoon, so I won't be home for your 12:30 call. I will try to reach you by phone later in the afternoon.