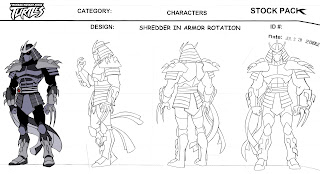 Attached please find a revised outline for TMNT episode 4, and proposed
rough premises for episodes 5 and 6.  Lastly, you will find a list of
“Turtle-lingo” ideas complied from several sources (Mirage, Playmates, 4
Kids) for discussion purposes – it is unedited.

I've read over the above-referenced material, and have a few comments/suggestions.

1.) What exactly IS a "Nano-Intelligence"? And rather than having it "escape" from the lab, what if it is deliberately released by its inventor/creator as a "real world" trial to see how it can react/survive outside of the lab? He could later realize his horrible mistake, and by way of making up for that mistake provide April and the Turtles with the key information about how to defeat the Nano-Intelligence (I'm not real crazy about the whole thing of April seducing the info out of him in a restaurant).

2.) Instead of having the Nano-Intelligence break into April's store to get at one porcelain mask, what if she has a display of half-a-dozen or more masks in her window? A wider variety of mask types might make for a cool bit where the Nano-Intelligence has to choose from among various expressions/attitudes in the masks.

3.) The ending is ... okay. But I would suggest this as an alternative: Instead of leaving Harry the hood back where he began, what if instead we make it a redemptive moment -- he is shocked out of his bitter, pointless, lowlife existence by the "death" of his "child", as it perishes in the flames screaming "Dadddyyyyy....!"
And to make it even more corny and sentimental (and you know how much I love that stuff) -- we could make the creator of the Nano-Intelligence a single, science/career-obsessed woman, who is also shocked out of her tunnel vision view of life by the sad fate of her nano-"child"... and in the end she and Harry get together to make a real child (later and off-screen, of course). Awww!

1.) This is not specifically a comment about this premise, but seeing as Hun plays a small part in this, I thought it was a good time to mention this idea I had a few days ago about Hun: Would it be interesting, future story-wise, to make part of Hun's backstory that he was once a prominent member of the Purple Dragons?

2.) Don is said to have "...his computer monitoring the city's power grid...". I read this to mean that he somehow has installed his own monitoring devices to keep tabs on the power grid, which -- if I'm reading it right -- I think is a bit much. I would suggest instead that he has actually just hacked into the computer network which runs and monitors the city's power systems.

3.) Wouldn't the "... blazing beam of energy coming from a high-tech cannon-looking device..." kind of defeat the Foot's purpose (stealth and hiding) of creating a blackout? How about this -- the waves from the cannon (being sound waves) are actually invisible to the naked eye (except perhaps up close, so we get some visual drama), but Don has rigged some kind of viewer which can "see" the sound waves as light waves.

4.) It seems odd to me that the Foot would so casually abandon their "vibrating sword apparatus", after going through so much trouble to create it -- I suggest that they actually fight to   keep it, but they must choose between continuing the fight and maybe getting caught by the authorities, or getting away safely with their "strangely glowing barrel". The scene can still play out as is, with the Turtles defusing the "vibrational bomb" -- except that maybe instead of the sword being destroyed, the Turtles get to take the sword back home with  them.

5.) Why is the Shredder so interested in "ordinary toxic waste"?

6.) I appreciate the idea that we want to hold back some information for drama's sake, but Splinter is being REALLY annoying with his reticence in this episode.

1.) When Raph grabs that "wicked looking table leg", perhaps it can have a big gnarly-looking bolt through it.

2.) I'm not sure if this would be too weird -- right now it seems kind of cool to me. What if Casey leaves some kind of "calling card" at the scene of his "victories" -- something like a crudely drawn hockey mask framed by the words "CRIME SUCKS!" (or something like that). I thought this could be a fun bit and a useful visual in the scene where the Turtles see the TV reporter doing the story on the car radio thieves who were beaten up (page 2) -- she could hold it up and say something about cards like this being found at other incidents where petty criminals have been beaten up.

3.) On page 4, when the mysterious large hidden door hisses open, perhaps there's a momentary nasty smell from the fact that the air sealed inside for so long has become stale and foul.

4.) On pages 4 and 5, instead of Raph insulting Casey with the line "You must have been sick the day they were handing out good looks", he says something like "When you fell out of the ugly tree, you must have hit every branch on the way down!"

5.) On page 5, when Casey hooks Raph's leg with his hockey stick and takes him down, I was thinking it would be fun if Raph gets flipped on his back and spun around really fast on his shell.

6.) On page 7, for the motorcycle scenes we should be sure Casey and Raph are wearing HELMETS! And for the scene where Raph forces Casey's bike to do a stoppie and flip him off, he should flip off at a point when the bike has slowed almost to a stop, so we don't get the idea that Raph wants to KILL him.

7.) On page 8, I don't like the bit with the guys holding up cards to rate Leo's kick (where'd they get those cards?). Instead, I suggest this: Casey and Raph (not Don and Mike) rate Leo's kick by holding up all their fingers. Leo, a bit miffed, says to Raph "Hey! Only a SIX?!" And Raph replies "Bro, it's all I've got!"

(I'm sure there are thousands more possible.)

5.) Here are tweaks to some of the lingo-isms:

Raise some shell!
You fight like an amphibian!
I'm short, green, and rarely seen!
Time to apply some Turtle Whacks!
Mean Green Smackdown Machine!
Gear up for a smackdown!
It's Thrashin' Time!

I also took a look at the drawings of the armored car you faxed me. I like them all. My main issue with  this vehicle is that I think it would be great if we could keep a lot of the wild stuff -- like the rocket launchers -- hidden until needed, at which time a panel opens and the device flips up and locks into position. That way we can have a vehicle which MOST of the time could be driven around without attracting undue attention, but at other times could be ready for all out Turtliffic Action (which makes for a cool toy)!

By the way, should I be sending my comments to the huge list of email addresses that are in your message?

I read over the second draft of the second episode script ("A Better Mousetrap"), and liked it a lot. I have no comments beyond that!

Gary did have a few comments, including some typos which I didn't catch, and a few suggestions for dialogue changes which I don't feel strongly about either way, so will leave it up to you to incorporate them or not. Gary made his comments in a word document, which I will attach to this email.

I got the faxes tonight of the sewer sled sketches and must say I'm not too excited by any of them. I'm thinking that those "extendo-arms" may turn out to be problematic, design-wise, and might have to go. We'll talk.

<< I like your sketch (though I'm not sold on the "Turtle Grin" headlights).  I did send you some other sketches to discuss; nothing great, but just trying to see if the wheeled-arm thing could work.

Also sent you a couple of roughs by a new design guy - he needs direction, but I feel he has the design chops we're looking for.

Speak to you tomorrow around noon - one -ish!

About the "Turtle Grin" headlights -- I'm not so terribly enamored of them, but if they are done with a certain amount of subtlety (i.e so the headlight lenses don't actually look like teeth), I think they could be a cool/fun design element. There are a number of new sport bike-style motorcycles which have similar headlight shapes, which may be why I sort of like them. But I'm certainly not married to them if there's something better.

I got the faxes, and I have to say the SewerSled is looking more and more like something General Dynamics or Raytheon would build... which is not bad PER SE, but it just doesn't have that funky Turtle garage-built feel yet. Actually a couple of the designs (Rough #9 Version D (battle mode), and Rough #2 version B) might provide the basis for interesting vehicles in the underground city story.

The Turtle Cycle designs, on the other hand, are bad... and I don't mean "bad" as in "good"... the one which would have the Turtles riding on their KNEES (!!!???) being the worst. (Even though somebody snuck in a "Planet Racers"-style front end on one drawing!) I think this low-slung manga/cruiser/chopper look is all wrong -- it should be a more dirtbike/supermotard (which is basically a dirtbike with lower fenders and street tire)-style rig, which is not only more flexible and practical, but also gives us an opportunity for some extreme "freestyle motocross" action.

Now on to the figure/character drawings. Why is it that all new artists feel the need to change established and iconic details unnecessarily in our characters? I just don't get it. If they were drawing Superman, would they change the style of his chest "S", give him a crewcut, and make him wear sneakers?

I think a directive should go out to any and all artists employed on this project that they should NOT do stuff like change the shape of the kneepads, give the Turtles gloves or leg wrappings, etc., and instead concentrate on getting a cool STYLE for the new show. I like these drawings, but only as drawings. I don't like a lot of the details. Leo's face in the full-body shot has a ridiculously tiny jaw and a tiny, bizarre, birdlike beak. If I am reading the art properly (and given that these are faxes and not the best way to present pencil sketches, I may not be), the use of the mask to "denote a 'nose'" as shown (i.e. a nose shape underneath the mask) seems really silly. I also don't get the "sumo knot" approach to Mike's mask... but that may be because the drawing is unfinished to the point that no difference from the regular style mask is readily apparent.

One thing I DO like in the two Turtle drawings is the overall posture and attitude of the Turtles.

Talk to you soon!