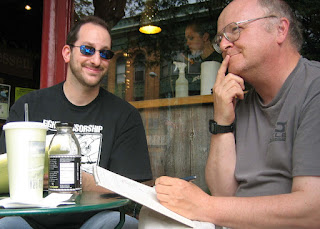 (Note: As promised, I am now going back to the earliest emails I can find having to do with the development of the 2003 4Kids TMNT show. This one is to Lloyd Goldfine after our first face-to-face meeting, held at the Mirage Studios offices in Northampton, MA, in early May of 2002.

First off, thanks for yesterday!  I had a great time meeting and working
with you both!  I was very happy to see we were all on the same creative
page, and I’m incredibly excited about the whole shebang!

Second, attached please find the Utrom/Shredder/Yoshi/Splinter deep
backstory that the four of us concocted at Tuesday’s meeting.  Norman and I
worked much of it out on the drive back to NYC.  I hope this write-up of
what we discussed accomplishes the following:

And lastly, I hope the darn thing makes sense!

Keep in mind that this is deeeeeeeeep backstory, and we can easily go
through a whole season (or two!) without revealing much of it.  As a matter
of fact, as Norman and I were discussing everything on our drive home, we
think we would probably end the 1st season (show 25-26ish) with the turtles
finding and infiltrating the TCRI building, accidentally activating the
transmat, and getting transported halfway across the galaxy!  How cool a
season-ender would that be?

I’m sorry to be sending this out so late, but it took longer than I
expected!  That being said, I would really appreciate it if you could review
it and get back to me as early as possible Thursday.  I’d like to revise the
draft bible accordingly, and this new backstory affects quite a few bits of
business!

PS – I’m currently contemplating maybe working from home Thursday (today!),
so feel free to try me there if you don’t reach me at woik! >>


Good to hear from you -- I also thought the meeting went very well and I'm psyched to be working with you on this project.


I got your email late (it's about 3:15 AM -- about an hour before I usually go to bed, so I'm gettin' a little groggy), read the attachment, and here are a few thoughts (bear in mind my brain is not necessarily functioning at its highest levels at this hour, and I may think of more to say later):


I like most of this backstory. It ties the Utroms to the Foot and the Shredder, as well as the mysterious group of "good" ninjas that we mentioned at the meeting, and gives them some more substance.


I think that the Utroms should be able (given their technology) to build multiple useable exoskeletons after their crash (I always assumed they salvaged a bunch of stuff from their ship -- in fact when we first did the Utroms' backstory, in issue #4 of the original TMNT comic, we stated that they salvaged mostly their exoskeletons and power sources). I suggest this because it would allow them to integrate more smoothly into feudal Japanese society and we wouldn't have to deal with the somewhat awkward plot device of the evil Utrom stealing the ONLY exoskeleton. (The exoskeletons, in my mind, are tools that the Utroms carry with them on all their travels to make getting around in alien environments a lot easier -- think of them as Utrom SUV's. And although we never stated it outright, they were also skilled at crafting different types of "skins" to go over the exoskeletons to fit in with many different humanoid races and species.)


I like the stuff about the parallel rise in power of the good and evil Utroms in Japan, though I think we should always keep in mind that the Shredder, though powerful as an underworld overlord (is that an oxymoron?), he is not ruling Japan. It might also be fun to think up a storyline (even if it only stays as deep backstory) which would have the good Utroms leaving Japan (maybe after a big showdown with the evil Utrom and his bad ninjas) and fleeing by boat across the Pacific, perhaps landing in Mexico and getting involved with the Maya and/or Aztecs, perhaps being there when the whole fall of the Aztec empire happens. They could then gradually move throughout the Americas, using their blending-in skills to fit right in with all of the indigenous peoples and tribes, as well as with the white settlers when they start arriving. This could also give rise to a set of legends of strange men-who-aren't-men among the tribes of the Americas, sketchy legends which are given little credence, except perhaps to a dedicated modern-day archeologist/anthropologist [friend/lover of April's...?] who is tracking all these legends down and trying to figure out the secret of the men-who-aren't-men (could be a fun episode or two... I'm envisioning a scene in a windswept canyon in the South West, where the khaki-clad anthropologist is shown examining a newly discovered Navaho rock painting showing an abstract vision of an Utrom separating from its exoskeleton -- nonsensical and fantastical to anyone who doesn't know the REAL story!).


Maybe Yoshi, as one of the Guardians, could be infiltrating Saki's dojo to keep an eye on what is happening with the Foot clan, instead of the other way around. Might offer more drama, show Yoshi as more heroic.


One wacky idea I had after our meeting -- this is kind of "out there", but it might offer some real creepiness to the proceedings. Many people have referred to the Utroms as "those brain guys", because of their small size and somewhat brainlike shape and texture. They are, in fact, in general significantly larger than the largest human brain. BUT WHAT IF -- the evil Utrom is in fact a RUNT among Utroms... indeed, he IS roughly the size of a large human brain... and over the centuries, he discovers that there's something MUCH better, much tastier than the Utrom exoskeleton technology -- and that's real human bodies! He uses some Utrom technology to actually remove the brain from a hand-picked specimen (chosen for superior physical qualities) and have himself placed in the cranial cavity, from which spot he more or less becomes that person's brain, using his specialized tentacles to interface with the human nervous system. (This different location of the Utrom in the body would also work well, I think, to obscure the fact -- until we're damned good and ready to reveal it! -- that Saki IS in fact an Utrom... i.e. we are so used to seeing the Utroms hidden in the BELLIES of their exoskeletons.) This could be a nifty bit of horror, as Saki must repeat this ritual (and it could become a real mystic ritual, over the centuries) many times, as his human vessels age and wear out. This, of course, horrifies and disgusts the good Utroms (one more reason for them to shun him!), as they have long ago foresworn using their peculiar anatomy to control other living creatures in this fashion.


P.S. I like your idea for the end of the first season -- that would be a great cliffhanger!

(Note: I couldn't find any photos from my first meeting with Lloyd in 2002, so I used one from a couple of years later. That's Lloyd and me sitting in front of the late, lamented Vermont Deli on Main Street in Northampton, sometime in the middle of 2004. The occasion was probably one of the bunch of times Lloyd drove up from New York City to go over story stuff… and while he was at it, hang out, go bicycling or Segwaying, or join us in regular events like the Mirage "Yankee Swap" Christmas party.

I really miss that Vermont Deli -- I spent many an hour sitting at one of the two slightly rickety green metal tables in front of the store, alternately watching Northampton street life or working on TMNT projects. Probably a lot of the stuff I've been posting on these "Blast from the Past" entries were typed on my laptop Mac at one of those tables -- the Vermont Deli was one of the early adopters of free wi-fi in the area, so I was able to plunk myself down with a large coffee and an oatmeal-raisin cookie, get all my emails of the day from Lloyd and other TMNT correspondents, and answer them al fresco. -- PL)