Some of my stuff is up for sale... or will be shortly!

I mentioned some time ago that I was planning to winnow down my hoard of TMNT comics and stuff, and over the last couple of days I have started to make good on that promise. I spent a number of hours in the storage area under my studio going through things, throwing some crap out and putting other stuff in piles to give away. And then I found a carton of these that I didn't know I had: 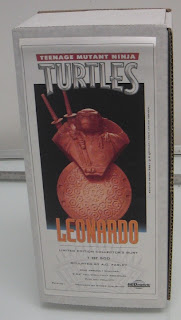 Some of you may remember this beautiful limited edition Leonardo bust sculpted by the talented A.C. Farley. They've been sold out for quite a while, but when I found this carton I realized I didn't really need all these, so I brought them in to Mirage today and asked Katie to work with Dan to put them up for sale on the Mirage website. I think there are about a dozen of them, and I am not sure exactly how much they will cost. (Note: I believe these are all the unpainted white resin ones.)

Then I moved on to my boxes and boxes of multiple copies of old Mirage TMNT comics. I am planning to only keep a few of each one, except for the first printings of the very early issues. I have not yet gone through all of the comics, but so far I have this stack of boxes ready to be taken down to Mirage and sold through the website: 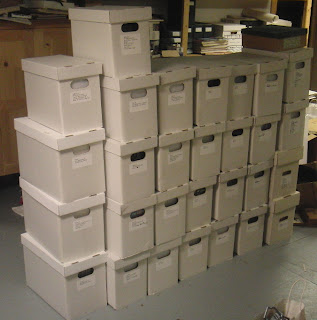 There are copies of pretty much every Mirage TMNT book, I think (though I can't offhand say exactly how many), with the exception of first printings of TMNT #1 (I'm keeping all my copies of that one). Hopefully, I can get somebody to help me load these into the truck (Dan? Gary?) and get them down to Mirage in the next few days. -- PL

UPDATE 11-5-2010: I ran into Dan Berger at Mirage yesterday, and he informed me that ALL of the Leonardo busts have been bought already! Crazy fast.
Posted by PL at 7:02 PM