Blast from the Past #326: Found sketchbook Part 2

Continuing with the drawings from the sketchbook I found recently..
I'm not sure exactly why I drew this "Savanti Romero Bull-Dog Guard" thing (seemingly a literal combination of bull and dog) -- it was never used in any of the comics MIrage published which featured Savanti Romero, and Playmates didn't do a Savanti Romero figure in the toy line back when this drawing was done… so maybe it was just a fun thing. But it seems too specific to be just a random drawing. Oh well -- that's memory for ya! 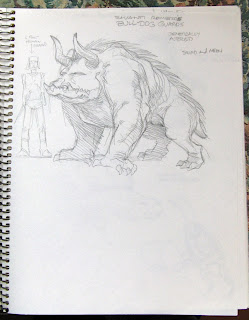 These "other storm drain/sewer mutants" are another mystery -- they don't REALLY seem to fit in with the somewhat goofy nature of most of the Playmates TMNT toys of that era, but I also can't recall having plans to use these ideas in any of the comics. I have to say that I do like the "telekinetic baby alligators", though. 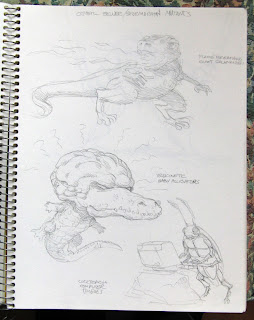 This is kind of a curious one. As some of you may know, I was never that crazy about the initialed belt buckles that Playmates gave the Turtles in the original toy line. It always seemed superfluous to me. So why did I do this drawing of a Mirage comic book-style Leonardo with an "L" on his belt buckles, and then sketch in another version with his entire name written on his belt? I have no idea. 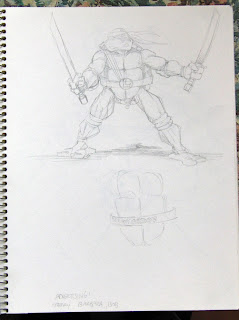 This is, I believe, a slight variation on a design that Kevin and I came up with for an alternate costume for Leonardo, with a little armor somewhat inspired by samurai gear. Not totally sure why I drew it in this sketchbook. 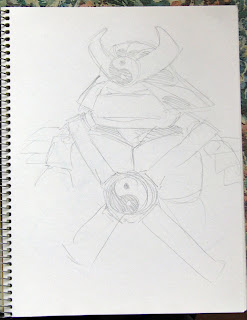 This is another oddity. The pose of this lightly-sketched Leonardo figure makes me think Kevin must have drawn it. But why was he drawing in my sketchbook? Again, no idea. I suppose it's possible that in this drawing I was trying to ape Kevin's style, but it really looks more to me like he drew it. 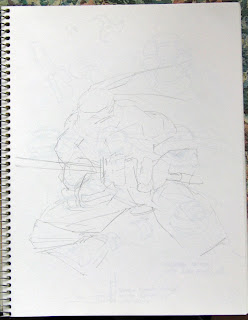 These doodles were clearly done with Playmates in mind. The "rising sun" bandanna was something Kevin and I had come up with as part of a possible alternative costume for Donatello. It's interesting to note the other ideas for elbow pads. And I like the "bamboo frame" idea -- this would have been used as a look for the sprue, or "tree", that would come with a Turtle figure and hold weapons that you would have to twist or cut off to use. I don't think that idea ever made it into the toy line, but I could be wrong. 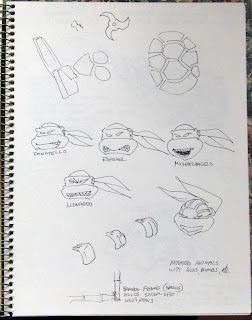 Another page obviously devoted to musings about ideas for Playmates' TMNT toy line -- this time trying to come up with concepts for mutated bad guys, apparently intended to be henchmen (or would that be henchmutants?) of the Shredder. I think the crab with the pop-up machine guns would have been cool. 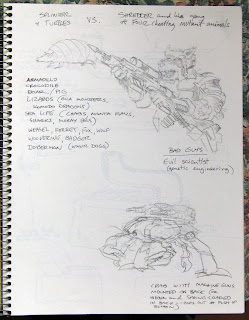 Here's another one of my ideas for Turtle sewer playsets -- I don't think this ever made it into the toy line back in the old days, but I think Playmates DID do something sort of like this in the 2K3 toy line. -- PL 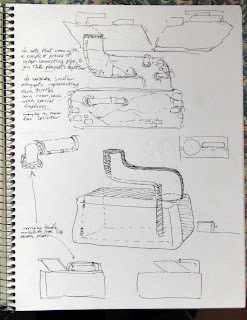