While in Maine recently for a short vacation, we (me, Jeannine and Emily) stopped in Welles to check out the location of Steve Lavigne's new store, "Shellback Artworks". We were happy to find Steve and his wife Denise (and her mom) hard at work getting the place ready for the grand opening next week.

Here's a photo of Steve standing at the top of the stairs leading to the entrance of his store (signage is coming). 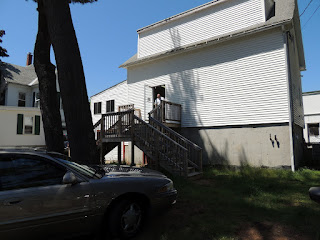 Steve was a little frazzled, but in great spirits as he showed us around the place. Emily took this photo of Steve and me posing with one of the large Turtle figures Steve will be using to decorate his store.


Sharp-eyed visitors to Kevin Eastman's late and lamented "Words and Pictures" museum in Northampton, MA, might recognize this Michelangelo as one of the four life-sized TMNT figures Kevin had commissioned to grace the walls of his museum. I bought them from Kevin a few years ago, but didn't really know what I would do with them, and ever since then they had been gathering dust in a storage space. Then, when Steve told me about his new venture, the light bulb went on over my head, and now all four of those figures will be in Steve's store.

The grand opening will be next Saturday, June 16, and I'll be up there doing a signing from noon until 3PM.