Blast from the Past #350: Sketches for "Ninja T's" softball team

Back in the 1990's -- I think -- Mirage sort of sponsored a local softball team called "The Ninja-T's", mainly because a couple of old friends of mine were on that team. I can't remember right now what the actual terms of the deal were -- we may have just let them use the image of the Turtles on their t-shirts and such.

Anyway, I did a few sketches for possible art to be used on those shirts, and I found these in a sketchbook last week. 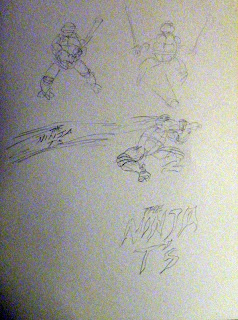 Here's an almost-finished drawing of one of the Turtles bearing a baseball bat (maybe he nabbed it from Casey Jones' "bag of tricks"). 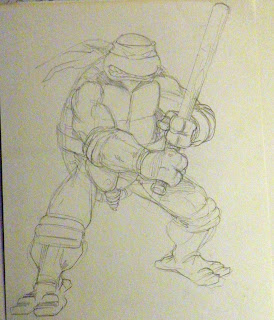 I seem to recall that this was NOT the finished image that ended up on the shirts, and that I actually did another which was a more action-oriented pose of a Turtle wildly swinging a baseball bat. But I'm not sure. Maybe I'll run across that someday. -- PL
Posted by PL at 7:14 AM

Email ThisBlogThis!Share to TwitterShare to FacebookShare to Pinterest
Labels: Blast from the Past, Mirage, sketchbook, TMNT