Blast from the Past #347: "Ultimate Drako" designs

(Pursuant to mikeandraph87's comment in my "Blast from the Past #346" post from a few days back, I am posting the following.)

When the storyline in the 4Kids' TMNT series had the two villains, Drako and the Ultimate Ninja, being accidentally combined through the power of a mystical vortex (or something -- can't remember all the details), I gave some thought to what this new character/creature should look like, and came up with these sketches. (For some reason, the file on my hard drive was slightly corrupted and I had to crop the bottom of it, which took off part of the "Ultimate Drako"'s feet.)


I thought it would be unusual and creepy to have Drako's and the Ultimate Ninja's heads basically switch position in this bizarre amalgam of both characters. And I liked the bit where the new set of arms would have these big bat-wing type hands which could cover up Drako's head and then open up to reveal it. I don't recall if that feature was ever used in the show, and I don't think this figure ever made it into Playmates' toy line. 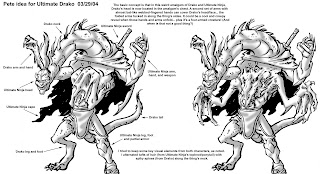 And here is the color animation model art that 4Kids created based on my sketches. -- PL

Email ThisBlogThis!Share to TwitterShare to FacebookShare to Pinterest
Labels: Blast from the Past, Drako, Playmates, TMNT