Blast from the Past #139: Evil Utrom designs

Back in the preproduction phase for the 2K3 TMNT tv show, when Lloyd Goldfine and I came up with the idea of the Shredder actually being, secretly, an Utrom in an exoskeleton, we knew that at some point we should reveal exactly what that evil little bugger looked like. I thought that he should look significantly different from the standard Utrom, in some way which would make him stand out and look BAD. So I did these two pages of quick conceptual sketches to try to come up with such a look. 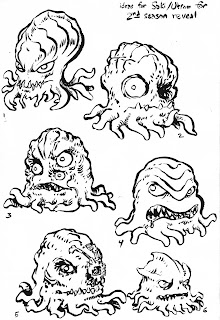 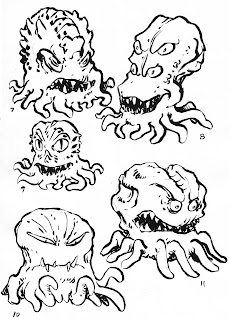 And once we had settled on a design, it was necessary to come up with a restraining device for the flashback scenes which showed how the evil Utrom had escaped on Earth. The following image shows the small tweaks I made to the design submitted to us by 4Kids, which was actually almost perfect -- I just wanted to try to make sure that the squishy little imp could find a way to squeeze himself out of it. -- PL 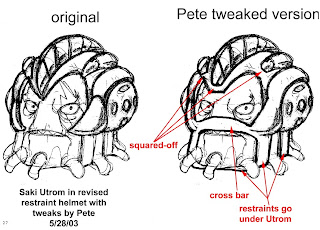