I had a great time this weekend appearing with Steve Lavigne and Eric Talbot on Saturday -- "Free Comic Book Day" -- at Steve's "Shellback Artworks" store in Wells, Maine. JIm Lawson was sick and couldn't make it, which was a bummer (hope you get well soon, man!), but otherwise it went really well -- lots of people, lots of signing, and free pizza (courtesy of Steve and Denise).

Two things stood out as quite memorable, the first of which was the sixteen-year-old girl who showed up with her parents, all the way from Florida. This trip to Maine to see us (and later Kevin Eastman, who was signing over at Jetpack Comics in Rochester, NH -- one town away from Somersworth, NH, where the first TMNT comics were printed) on "Free Comic Book Day" was her "sweet sixteen" birthday wish, and her parents (cool people, obviously) granted it. Here's Steve signing the back of her t-shirt, as he dad and mom look on: 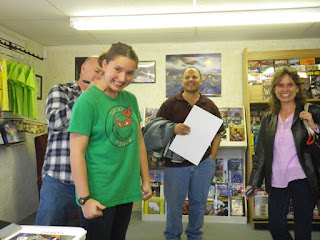 I wish I could remember her name -- I think it might be Stephanie or Melanie, but given how bad I am with names, I'm probably wrong. (Maybe she'll see this and write in to correct me -- that would be nice.*) We were all very touched by how happy she seemed to be in meeting us and getting her Turtle stuff autographed.

The second thing was the unexpected appearance of someone from our two years in the early 1980's in Dover, NH, someone that I thought I'd probably never see again… but, in one of those strange and wonderful "small world"-type of phenomena, she happens to be a friend of Steve's wife Denise. Here's a photo of the two of us which Steve took: 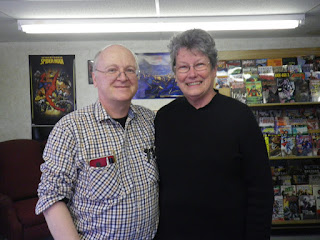 The woman in the photo is Carol Salava, who was a Justice of the Peace in Dover when we lived there, and in the summer of 1983, officiated at our wedding in the back yard of our house on Union Street. I was quite frankly flabbergasted that she showed up at the signing, but very, very pleased to see her again. As you can see from the following photo of Carol marrying me and Jeannine back in 1983, we've both changed a little bit:

… but I have to say that Carol still has the warm, friendly personality I remember from our dealings with her in those early days. What an unexpected treat! -- PL

*And so she did, a few days after I posted this entry -- thanks, Melanie Servidio!
Posted by PL at 4:55 PM