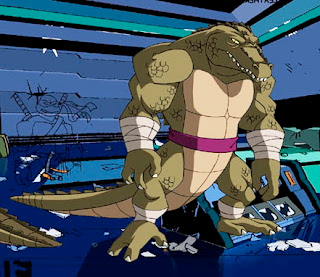 Yeah, I spoke to Stan who had this to say:

The way we've drawn him in the past is that Usagi's head is below that
of the turtles. However, Usagi's ears rise above the Turtles.  So, if
you count the ears, Usagi is taller.  If you don't count the ears, he's
shorter.

So according to Stan, Usagi is a bit shorter than the Turtles.  We sent
him a size comp and color models of Usagi & friends, all of which he was
very pleased with (I've attached the rough size comp here for you to
see).

If Stan is happy, then I'm happy!

I only have a few comments.

1.) It's still not clear to me WHY Don and Leatherhead are trying to hook up an antenna. As I asked before -- is the cable (which they surely have ordinarily) out because of the devastation? If so,  a brief mention of it would be appropriate, I think.
Also, curiously, a bit down that page there is something described as "the communications array" which Don and Leatherhead are said to be getting to work on. Is this the same thing as the aforementioned antenna? If so, that's weird... why would the TV antenna be the same thing as the "communications array"?

2.) The idea that Leo and Raph would be out mapping the impaired roads seems a bit silly to me, as by the time they are likely to need to use those roads they will have been cleared. After all, they don't drive around that much anyway. (And why does Leo need to use "Shell Binoculars" to see rubble in the streets?)
I would suggest that it would make more sense if they are either (a) checking SPECIFIC streets (i.e. those near April's place, the warehouse where they store the BattleShell, Casey's place, etc.) or (b) they are out looking around just to get a general idea of the state of the streets/neighborhood.

3.) There is a line which suggest that Mr. Go has "reflective 'cat' eyes". What does this mean, exactly? That his eyes reflect light like a cats, or his pupils are shaped and colored like a cat's, or both? Or something else entirely?

I don't quite get this. Legitimate? How? Why? Since when? And... his "image"? What image is that? Of the armored Shredder? Oroku Saki? The Foot?

What is this "making biscuits"? Never heard of it.

Here are my comments on the premise for 61, "Hunted":

1.) Mr. Literal says: I suspect it's a phrase thrown in just to show what a nice guest Leatherhead is, but does he really "pay his rent on time"? I doubt he's actually being charged rent by the Turtles.

2.) I think Leatherhead's hair-trigger temper/psychotic behavior needs to be "fixed" at some time in the near future... otherwise he's going to become a character that the Turtles will NOT want to be around at all -- WAY too dangerous! Especially if he goes off at slight things like Raph's "bull in a china shop" comment. Maybe Splinter can teach him some meditation techniques, or we can discover that Leatherhead has some kind of mysterious device surgically implanted in him that is causing his rages, and that is removed somehow (with Utroms' help?). Or maybe a brain tumor...

3.) Leatherhead beats Mike to a pulp and leaves him unconscious at the end of act one... but are any of the Turtles pissed off/appalled at this? Apparently not -- they're just "worried" about Leatherhead. This seems really out of character. There should at LEAST be some debate here among them as to the wisdom of having Leatherhead live with them. I suspect Raph would be ripshit, and have to be calmed down by the others before he goes out to kick Leatherhead's ass.

4.) It's very confusing to me who is ahead of/behind who in the tunnels, who's following whose tracks. It needs to be made much more clear exactly where the players are in relation to each other.

5.) It seems really weird that Marlin would leave such destructive mines -- wouldn't he want something that would immobilize or incapacitate his prey? He is, after all, a hunter who wants trophies. Maybe the mines should throw out sticky goo/foam (like the stuff they used in the HULK movie), or nets, etc. OR... if we REALLY want some bangboom, they could be "shock mines" which shoot out in all directions like a dozen "mini shock grenades" that "explode" with stunning electrical charge when they hit something. This could give us the pyrotechnics if desired and also maybe be cool to show the Turtles dodging and bobbing and weaving to evade them (maybe one of more of the boys get grazed by the mini mines and get an idea of the kind of pain they'd feel if they were hit head on).

7.) Marlin fires Betsy at the Turtles and "burns a large deadly hole in the wall". I'm not really sure what a "deadly hole" is, but why is Marlin shooting at the Turtles with a weapon that is so destructive? I thought he wanted to "bag" them as trophies?
Also, in this scene Leatherhead apparently -- somehow -- is suspended from a cable. How/when did that happen? How does Marlin lift the gigantic Leatherhead, and why? Seems unnecessary to hang him over the pool... Marlin could PUSH him into it if need be... although that really doesn't make any sense either -- again, Marlin wants TROPHIES!!! Didn't he just hunt this alligator through the sewers? Why destroy him now? I think Leatherhead could inadvertently fall into the pool on his own, perhaps from wiggling and writhing around trying to free himself. It could even be a cool scene where one of the Turtles is trying to help him get free, but it's just making Leatherhead more aggravated, and the TWO of them accidentally go over the edge into the pool. It would ramp up the angst for the Turtles in this scene if both Leatherhead AND one of their own were in peril.

8.) I find it very unlikely that Raph's slender sai blades could stop the blades of the "sewage processor". Maybe he should use something else like a length of pipe or some found object.

9.) Marlin's suicide move -- putting "Betsy on overload cranking the energy canisters" -- to take out not only himself but the Turtles and Leatherhead seems silly and unnecessary. I would go with something a little different, like having some of his energy canisters accidentally get activated during (and because of) Leatherhead's smash and bash attack on him.

"Mikey leads the turtles and Leatherhead through unfamiliar sewer tunnels until he comes to a wall.  Leatherhead antics back and smashes through the wall, only to find himself in an abandoned subway station decorated in grand Victorian style."

What's this all about? Why does Leatherhead have to smash through the wall? Is this an accidental discovery, or does Mikey know where he is taking Leatherhead? Are we saying here that the Turtles know about this "abandoned subway station decorated in grand Victorian style"... if so, they must have previously found a way inside. Why doesn't Leatherhead enter that way instead of smashing the wall down?

"Meanwhile, back at the farmhouse, we could run a sort of lighthearted B-story in-between all the hearty A-story action.  Casey and April are figuring out that their relationship is not a relationship … and through Casey’s carelessness verbally … they get to the point where it’s not even a friendship and they’re not even talking to each other."

Snore... I'm bored already. I thought we had gotten beyond this stuff with Casey and April. I think we can do all the schtick with Casey's Mom and have THAT provide the conflict instead of this tired stuff.

3.) Although I'm not wedded to it, I kind of miss the picnic opening as in the comic. Would it work better if Don, Raph, Casey and April were having the picnic... and that way, Casey and April would be aware of the threat of the survivalists, making the stuff with Casey's mom that much more tense?
Also, I don't like the bit with Raph throwing his sais at the apple on Don's head. One of the reasons I did the bow and arrow thing in the comic was as a way of demonstrating (without dwelling on it) the Turtles' facility with other weapons.