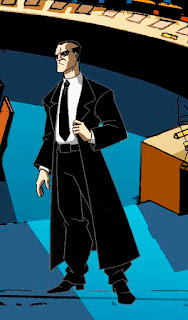 We actually didn't say "NO SUPERBISHOP."  My understanding was: we talked
about the degree to which Bishop could have enhanced himself.  We said no
lizard eyelids and not to go too overboard, but that he could have some
increased speed and strength, but not unlimited crazy bio-engineered powers.
I would like Bishop to be able to hold his own in a fight against the
beaten, captured Turtles, at least for a little while.  The hope is to make
Bishop a formidable foe for the Turtles in and of himself.

If this isn't acceptable, please let me know asap.

The problem with any kind of "enhanced" Bishop is that it raises the question that if he has been enhanced enough to fight off the Turtles (and are they really "beaten"? I thought they had just been strapped to tables -- resting up, if you will -- for the last hour or two), why does he need their DNA to create his super-soldiers or whatever it is he wants to do?

The "enhanced Bishop" thing has always struck me as something that a writer threw in because he thought it would look cool, without giving it a whole lot of thought. It just doesn't work for me... at least as it sits right now. Maybe it's partly because it's the way that, out of the blue, with zero foreshadowing of ANYTHING remotely like what happens, Bishop is suddenly this whole other thing, and not only can he fight better and move faster than one Turtle, he's superior to all four Turtles.

I would prefer to see a scene with Bishop surprising one of the Turtles with a clever fighting move -- not a superspeed maneuver, but something quick and effective, and all the more effective because the Turtle is surprised that this move is coming from Bishop, who up to this point has only seemed to be an evil "spook" type guy, and not intimidating physically. And Bishop could use this moment to escape with the samples of the Turtles' DNA (assuming we're still going to have him take those samples) and THEN later on, in another episode, we could bring him back as a truly cool and creepy guy who's been enhanced with TMNT DNA (maybe there's even more than just him -- maybe there is a squad of these enhanced warriors... they could have some weird physical characteristics like green eyes, shell-like/horny growths on their arms, hands, and legs, etc. -- NOT looking like "TurtleMen", but something with HINTS of mutant turtle).

I read the premise for episode 60 and have a few comments:

1.) I wonder whether the $14 million for the Turtles and Splinter is a bit much. Where is Hun supposed to get this kind of money? And why TEN times as much for Splinter as for one Turtle?

2.) I'm not sure why Don, Leo and Leatherhead are working on an "antenna hookup to improve their limited broadcast reception". Don't they have cable TV in the lair? Or is the point that there IS no cable TV at the moment (due to invasion damage) and broadcast TV is all that's available? If so, that's not clear. In any point, why is Leo helping Don and Leatherhead? He's no techy. The only reason I can think of is that Don and Leatherhead need a third set of hands for grunt work... and I can't imagine why, exactly.

"The fight does not go well for our heroes.  Mr. Touch and Mr. Go overpower them and secure them in high-tech restraints.   Hun drops down from a helicopter to exchange cash for his enemies.  Just as Hun's about to take them out with his bare hands, Splinter senses something -- and knocks Mikey, Raph and Casey over the side of the roof, leaping out of sight after them!  A beat later they rise back up, having landed on top of a Fed Fighter that slowly rises up into sight -- April piloting the ship!  April blasts the Foot copter, which crashes through the roof, bringing Mr. Touch Mr. Go and Hun with them, and the entire building crashing down on top of them. "

I thought Splinter was, like the Turtles, "secured in high-tech restraints"? If so, how does he do all that he does in this scene? And if he somehow IS able to do it, how do he and the Turtles hang on to the ship that's coming up underneath them so they don't roll/slide off and plummet to the groound? There really seems to be little logical point in having them "secured in high-tech restraints" anyway -- why not just have them follow Splinter's command to leap over the edge of the building?

And how exactly is April piloting this Federation ship, anyway? When did she learn how to do that? And where did she GET the ship to begin with?

A quick question re: scale of Usagi to Turtles:  is Usagi, tip of ears
to toes, the same height as a turtle, or does that make him too small?

Playmates is asking for clarification.

I wanna make sure we get this right!

You're feedback is greatly appreciated!

Hope you all had a wonderful holiday!

I've always considered Usagi to be about the same height as a Turtle -- but NOT from toes to ear tips, but from toes to TOP OF HEAD (i.e. base of ears). That way, neither one has to look up or down to look the other in the eyes. Maybe you should ask Stan what he thinks...?