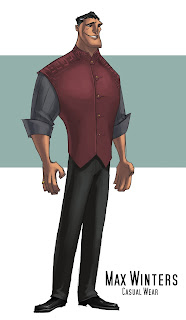 We're starting to look at tweaking that turtle model from the trailer as we
discussed. (adding more of a lower jaw, playing with the snout a bit, etc.)
And we're also looking at designing the other three turtles as well over the next couple of weeks.

I'll probably have a few tmnt-specific questions as we move on, but what are your thoughts on their wrist wraps? We didn't have them on the trailer model.

I remember sending you an early thumbnail sketch and you didn't like the
wrapping, but in retrospect, I was thinking it just might have been the crappy loose way I drew them anyway.

The topic came up actually reading chat boards - a lot of people seemed to
notice them missing. I love the fans.

So my question is what do you think? Do you want to have on-model tight wrist
wraps on them? I'm sort of in the middle about it, as I'm liking the direction
we're headed with the wrist thickness and especially with the flexing/vein-
popping muscle system we're rigging inside of it, I don't want to detract with
unnecessary detail. That said, it's also a big green mass that could benefit
from breaking it up with a wrap.

Anyway, lemme know when you get a chance. Maybe it's a matter of a sketch on
my part to start.

In all honesty, I didn't miss the wrist bands/wraps in the trailer, at least as I have seen it so far (Quicktime low res movie). In fact, I never even thought about them while watching it. Today, when we see it projected on a big screen, that might change. But if you were to ask me what I would prefer, all things beging equal, I would say let's have them wear wrist bands/wraps. For the rabid fans, at least.

Speaking of fans, I was pretty surprised -- shocked, maybe -- that it took over week for any mention of the prints I made up from those trailer frames to show up on a TMNT website. And no one who was at the show has yet commented on the special edition TMNT #1 that we premiered there. The reaction at the show to the prints was not what I expected -- not many people paid that much attention to them, but those that did thought they were very cool. It's hard to predict what fans at shows will go for. In fact, as the day in question was pouring rain, people may have been avoiding large paper item that might get ruined in the wet. Who knows? I may bring the rest of them to Anthrocon in Philadelphia in July.

Yeah, let's talk asap. I'm out all day tomorrow - or at least when you'd be
available at the office. So do you want to shoot for, say, 1pm your time on
wednesday?

We could probably include gary and galen too, just so everyone's present and we
can update on the process and how everything is going.

Wednesday at 1PM our time sounds good. I will copy this email to both Gary and Galen, so if they have any problems with that hour they can let us know.

Great! I look forward to seeing it. By the way, I finally got to show the nearly finished teaser trailer to my brother Bruce (probably one of the biggest TMNT fans around) and he loved it.

PS - funny story about palette/palate, since you brought it up. We send lists
to Hong Kong for them to collect visual reference off of the internet for us.
They send back dozens of images for each category (fridges, skateboards, etc.)
A few weeks ago, we got back one batch that just had people with their mouths
open. Really weird. Then I looked at the folder... it was titles "palettes".
Point taken.>>

That IS funny! Hope I'm not too big of a pain in the butt with my spelling thing... but I always cringe when I misspell something, especially when it goes out in printed form (like the TMNT comics). I think I get it from my mom.

I agree that Winters is an issue, but I'm worried we're now verging on making him dull and boring in terms of his dialogue. He's a colorful guy and if we don't keep him that way, the audience will get itchy butts when the turtles aren't on screen. I know I'm right on this.

Serious, moody, straightforward and menacing are not necessarily dull. Remember that if we don't make Winters a threatening presence, he won't seem like much of a villain (even though we have the switch later on where we see that he is really trying to do something good, finally). And now, every time he spouts one of those lines that I have been calling "wiseass", his threat quotient drops (at least from my perspective). We just need to find the right words (difficult, perhaps, but not impossible).

Let me see if I can give you an example to explain why I so dislike the "wiseass" tone that I have been bitching about. Remember the movie "Star Trek: Generations"? I do, and I remember CRINGING in the theater (and every time I've watched it since at home on DVD) when the android Data clenches his fist in front of his chest, and draws in downward while simultaneously saying "Yesss!" -- a horribly cliched gesture from our time, pasted onto this android two hundred years in the future -- CLEARLY written in with the idea that a general moviegoing audience would identify with it. Maybe that's so, but it was frickin' STUPID.

Another example -- again from STAR TREK, but I think it was the next movie, "First Contact", and again with Data -- the android grabs a phaser rifle, preparing to fight the Borg who have invaded the Enterprise, and with a grim look he says "Lock and load!" It's another contemporary phrase which the producers clearly thought would sound "cool" -- even though it makes ABSOLUTELY NO SENSE. Never in all seven seasons of the ST:TNG tv show did ANYONE say "lock and load" when preparing to use a phaser. My understanding of the phrase is that it comes from the Vietnam era and refers to flicking the safety on (lock), then racking a round into the firing chamber of your M-16 (load). I may be off on this, but the fact remains that with a phaser rifle, while you might indeed lock it (put a safety on), there is nothing to LOAD!!! Then there's Worf firing a weapon at a Borg and saying "Assimilate THIS!" -- another wiseass, contemporary slang phrase. I hate that kind of stuff.

Talk to you tomorrow.