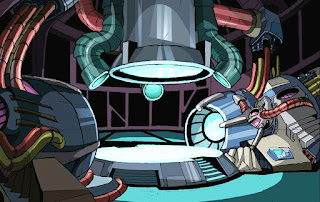 So I'll be up to see you next Friday (with Vinnie) to hang and discuss
season 2!  Whoopie!

In other news, a beta test of the TMNT website is up for us to check
out, play with and give comments on. Please keep in mind that it is a
work in progress; many of the buttons don't do much, lots of the written
pieces are being revised, and more bells and whistles are sill to be
added, etc.

Send me any and all notes by Friday morning if possible - I scheduled a
meeting on Friday with the website guys!

I look forward to seeing you again... should be fun!

I tried to go and look at the test web site, but it was loading REALLY slowly, so I think I'll wait until I can get down to Mirage and use the high speed Internet line there.

2.) I appreciate the facts that you have kept that "crystalline outline" style for the dematerialization effect, but I was wondering if instead of breaking up into "clumps" of crystals, the crystalline shapes actually sort of UNWOUND -- so that as the basic shape of the Turtle's body begins to break up, it actually breaks up into a spiraling vortex of components which resemble (but which don't necessarily have to be EXACTLY like) the outlined drawn shapes in the Turtle's body. The only reason I suggest this is that I have seen the "clumpy" disintegration effect in a couple of movies recently, and thought something a bit more unusual might be good. However, if we can't figure out a good way to accomplish what I am suggesting here OR it turns out to be not a great idea, I would accept what has been submitted.

3.) The one interior design for the TCRI building that I'm not really crazy about is the transmat chamber, for a couple of reasons. First -- and most important -- I would really like to see the transmat platform and the machinery immediately surrounding it more closely resemble the stuff from the original comic book. If you have a copy of the first printing of issue #4, that cover has an excellent view of this hardware. (I'll attach an annotated scan of that cover to this email.) Just to be clear -- I'd like the design of the transmat for the show to include the key components which I have circled on the cover scan, but extra stuff, if needed, is fine (as long as it looks right, of course).
The second thing is those curved bladed shapes around the top of the transmat hardware -- they look a LOT like the blades on the Shredder's armor, which I think is not appropriate.

4.) As promised, also attached is my idea for a TCRI patch logo design.

Just a quick note to let you all know that episode #1 of the all new, all
cool Teenage Mutant Ninja Turtles is in da house!  It arrived on schedule,
packin' tons of serious butt-kickin' ninja action!  We are currently cutting
it to time, calling for retakes, fixing dialogue sync, etc., and we hope to
lock picture by tomorrow night!

And our main title sequence is scheduled to arrive this Wed!

Big doings in ShellTown to be sure!

Cool! Can't wait to see it.

I've watched the tape of episode 2 several times, and REALLY like it... even more than the first episode! It's got me real eager to see more episodes -- I think this serial thing is really going to pay off big time. There are some REALLY cool touches, like the distorted shadows on the sewer wall as the Turtles run by in one scene, and the reflection of Don and Splinter in the disassembled Mouser's head. Of course there are also a couple of things that I have to mention as my critical self kicks in.

I'm not sure if Gary talked to you about this, but one thing we both noticed right away is that those mask colors in the intro are still wrong (these are those close-ups of eyes in masks which slide into frame, two from the right and two from the left). Is this going to be fixed before the first episode airs? Hope so.

The major thing which has got me a little worried, and maybe you can say something that will easily allay my fears, is the issue of April's outfit. When you were up here for our meeting last week, I remember you saying some stuff about how slavishly the animators in Korea follow the model sheets and storyboards, which occasionally results in weird/undesirable things happening. Well, as I watched April in her lab coat and belly shirt (a combination which was okay but looked a BIT odd), I began to wonder if we were seeing the beginning of another situation where -- even though I know we talked about this, and agreed that she should wear different clothes sometimes -- April would be seen wearing the exact same thing in episode after episode. I don't recall seeing any model sheets showing April in different outfits... were there any done?

I know we all don't want to repeat the horrible Fred Wolf-era mistake of keeping April in one set of clothes forever (boring!), so I was wondering what ideas you have for solving that problem. Obviously some of the episodes are far enough along in the animation production line that if April is wearing the same pants/sneakers/belly shirt getup in them, it's too late to change . On the other hand, might we attempt to change this situation in some of the shows which are NOT that far along? (Assuming the problem that I am talking about actually does exist, of course.) What would it take -- supplying a specific new model sheet of April in a different outfit (or outfits) for each episode in which we decide she should have changed her clothes?

I think that some careful attention to this might result in benefits such as making the show more appealing to girls (who pick up on that kind of thing right away) as well as opening up a greater possibility of doing April fashion doll-style toys (Barbie scale). I talked with my daughter about this, and she has some interest in possibly sketching out what she thinks might be some different cool outfits for April, if you think that would be helpful.

Come to think of it, although it's clearly most important where April is concerned, it might not be a bad idea if we kept this idea in mind for all of our major human characters, especially Casey.

That's all for now!