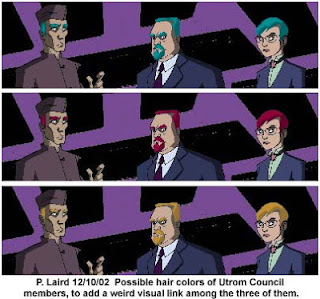 (Note: A few posts ago, in "Blast from the Past #601", I put up several emails which -- due to a technical snafu -- were incomplete. I since have successfully retrieved the complete emails and will shortly correct that previous post. -- PL)

Here are my comments on the color models:

Guardian: I prefer "b" but with the gold colored medallion of "a" (see attached tweak)

Trio: I think their basic colors are fine, and I could probably live with them as is, but I wonder if we could do some kind of small color thing which would biind them together, visually, in a somewhat odd and subtly disconcerting way. My first suggestion is to give them all the same hair color, and make it a somewhat odd color. I've done a tweak of the hair color to show you what I mean, but I'll attach it to a second email to avoid any compression problems.

Thanks for the notes.  Re: the eye glow/hair color thing, does this mean
that ALL the Utrom (besides the Trio) should have the same hair color or
eye glow?  I don't particularly mind that we'll be telegraphing
something weird about them - - I kinda think that'd be part of the
fun... but let's discuss tomorrow.  I will call you from animatic
central at 12:30.  I will most likely only be at the
animatic session until 1pm.  If we miss each other, try my cel phone.

Glad you got that email -- AOL was acting up earlier and I wasn't sure it got to you.

I'm ambivalent about the Utrom eye/hair color question. I think it would work if only those three had the same color, or if all of them did, or if none of them did. (Hows THAT for noncommittal?)

I looked over the art that was faxed to me today -- 5 models for the booby-trapped "Gauntlet Hall," 6 new Guardians, 2 Baxter Stockman Exo-suit views -- and it's all fine.

The first few scene of the all new, all awesome TMNT animated series has
just arrived today hot off the presses from Korea and what can I say... it
KICKS ASS!  Keep your peepers peeled for your very own VHS copy of these
scenes, which you should receive tomorrow!

What's on the tape?  About 1 minute of serious butt-kicking color scenes
followed by 2   minutes of cool pencil test scenes!

Just wanted to let you know you should have gotten a CD w/ various
turtles' show music tracks as well as a rough 1st draft of show 26!

Send me any and all notes asap and we'll turn this puppy around!

Still not enough progress on the next arc due to production stuff, teh
holidays, and generating 12 promo scripts out of thin air at the last
moment... but I'm still on it!

Hope all is well with you and yours!

Talk to ya tomorrow!

Re: Episode 26 first draft -- I think this may the first "first draft" script to be really close to final approval as is. I have very few comments.

1.) Pg. 17: "Rappelling" is spelled incorrectly...  but anyway, what Don and Mike actually do in this scene isn't really rappelling, I think.
In the following paragraph, I thought it might be funny to add to Mike's lines about the "giant stomach: "... I don't even wanna think about what "down there" entrails... uh... I mean entails!" But then again, I like puns.

5.) Pg. 23: In his notes, Gary said he didn't care for the bit where the female Utrom covers herself up with her tentacles. I see his point, but for me it stays JUST this side of silly without sliding over into stupid, and I like the weird humor of it (it's kind of like Don with the pigeon puppet...).

6.) Pp. 28-30: Gary also makes a good point about the Utroms firing their energy weapons around their own machinery. I think it would be a good idea to have one of them say "Use only stun settings!" or something like that, and have the actions of the Turtles, including perhaps one of them getting partially stunned while swinging overhead and dropping onto a console, cause the damage which results in the machinery of the transmat going haywire. If we did want the Utroms weapons to cause some overloads or whatever, we could even add to the Utrom's line and have him say something like "Aim carefully -- even stun blasts could damage the organic parts of the delicate translocation matrix!"
Also, if I'm reading this correctly, the transmat seems to be in the same room as where the Turtles find Splinter in his holding tank. This is not right, I think. In the comic, we had the Turtles find Splinter, then get surprised by the Utroms, then beat feet down a corridor until they came to another room which was the transmat chamber. It just doesn't make sense to me that the Utroms would put both things in the same room.

I listened to the music tracks and don't have much to say, except that they sound cool. I think Gary might have some more specific comments. They DO make me want to actually SEE these shows even more, though!

Just wanted to let you know that I read the final draft of the script for episode 26 and it's just peachy!

By the way, I really like the animation bits you sent, and want to see MORE! I showed it to my brother Bruce (major TMNT fan) and he wanted to see it over and over. Can't wait to see a whole episode.