Blast from the Past #330: Pete at Fred Wolf's office

I found this one while rummaging around in the horrific mess which is my room (I was going to say "cleaning", but that would not be at all truthful). It's a photo taken by Kevin Eastman, I believe, during our first visit to the Murakami-Wolf offices in California back in 1986 or 1987 (at this point in time, the dates are starting to blend together). It was during the time when the original TMNT show was being developed. 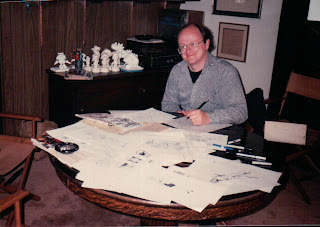 Kevin and I were out there to meet with Fred Wolf and go over what they he and his crew had already come up with for concepts for the show. Some of them were pretty bad, in our opinion (for example, they had the Turtles defeating the Shredder and his minions at the end of the first three episodes and then moving into the Technodrome, making it their headquarters... which made zero sense to us), but others were good. It was an exciting time.

In this photo, I am sitting at the table where Kevin and I were going over the stuff and sketching out our own ideas for the show. I think I am working on a design for a Foot ninja costume -- it's hard to tell. -- PL
Posted by PL at 6:44 AM