This past weekend was "Free Comic Book Day" across the country, and the putative "30th anniversary of the Teenage Mutant Ninja Turtles" (they were actually created in November of 1983, but it was May 5, 1984, when we premiered the first issue of the TMNT comic book at a small convention in Portsmouth, NH -- almost exactly thirty years ago), and I was scheduled to appear at the Knights of Columbus Hall in Rochester, NH for Ralph DiBernardo's Jetpack Comics store on Saturday (which is the actual, official"Free Comic Book Day"), and then the following day, Sunday, at my buddy Steve Lavigne's "Shellback Artworks" store in Wells, ME. Steve and my friend and fellow Mirage artist Jim Lawson were also appearing at both venues.

As the weekend approached, I was getting more and more anxious about it. Part of that had to do with what I had been hearing about the event -- that it was going to be huge, with big crowds of people on both days -- but part of it also had to do with the fact that for the first time in a very long time (possibly fifteen years or so, maybe more), I'd be appearing alongside my former partner in Mirage Studios and co-creator of the TMNT, Kevin Eastman.

I wasn't sure how that would go. There has been a lot of water under the bridge, as the saying goes, over the years since Kevin and I first became friends and shortly thereafter created the Ninja Turtles. It's safe to say that over the last couple of decades, we had grown estranged, and had little to do with each other.

Over the past couple of years, however, we have reestablished a relationship though cordial emails, which seemed the best medium given that we live on opposite sides of the country, and I've never been one for talking much on the telephone. We've even recently collaborated artistically again, when I inked a few drawings of Kevin's.

But I was still concerned -- what would it be like to spend time with Kevin, not only in the same room, but at the same table, literally side-by-side, after all these years? Well, I have to be honest…

In many ways, it was as if the intervening years just hadn't happened. I once again experienced that warm spirit and infectious, wacky sense of humor that I remembered about Kevin from the early days of our friendship. It was truly a pleasure to see him again. 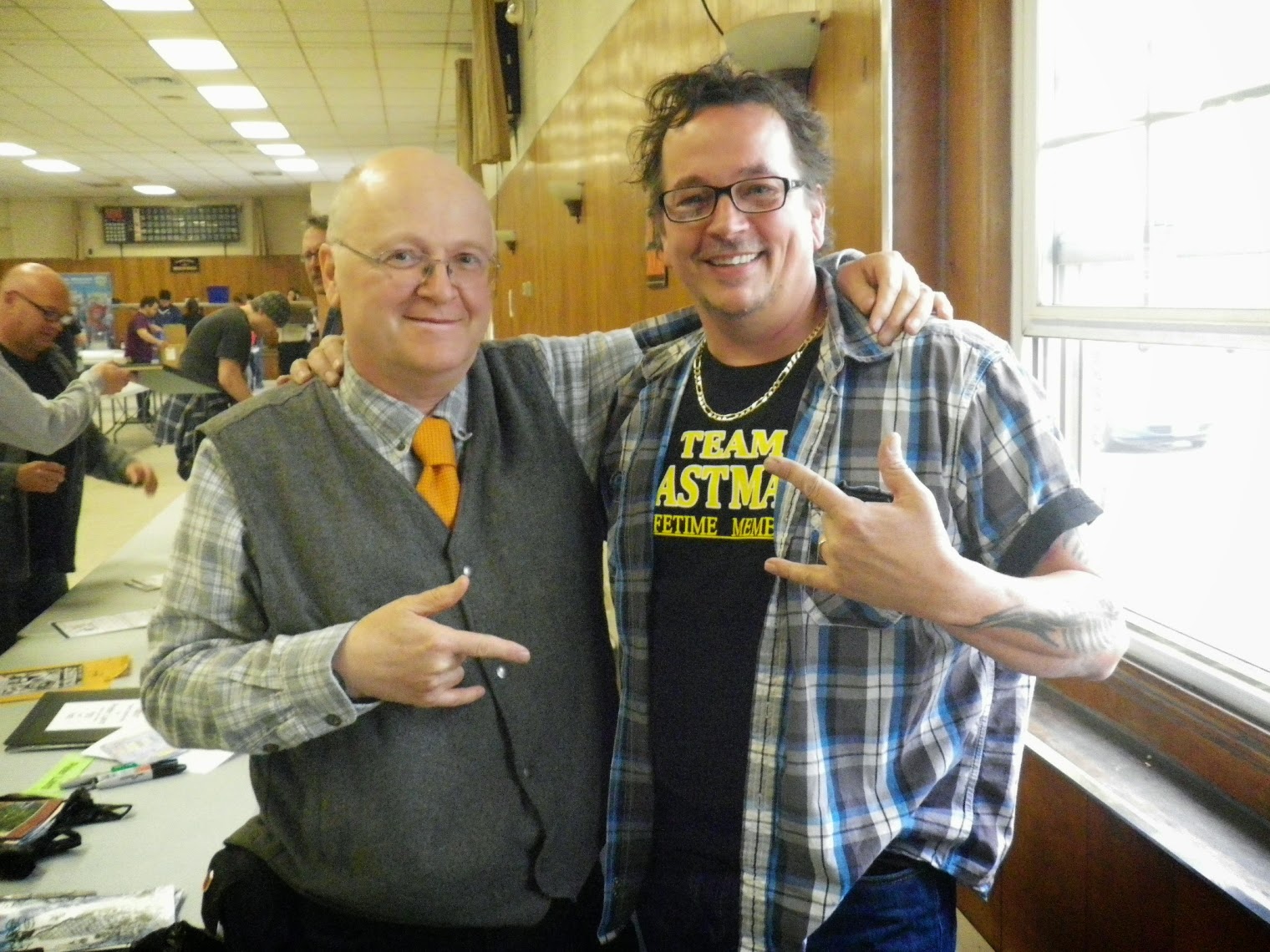 (Who are those boys? Pete and Kevin in Rochester.)

I wish we'd been able to spend some more time together, outside of the FCBD events, so that we could just talk about life and catch up on what we'd been doing for the last decade or two, but the demands of the weekend and our relative schedules pretty much didn't allow for that, except for one thing which I will get to in a bit. I did also get to briefly meet his wife Courtney and son Shane, which was nice.

Outside of being with Kevin, how were the signings themselves? Two words come to my mind -- exhilarating and exhausting. I think I spent about four or five hours each day along with Kevin signing, shaking hands, and chatting with fans, most of whom had come from neighboring states, but some of whom had traveled huge distances to come to the events. 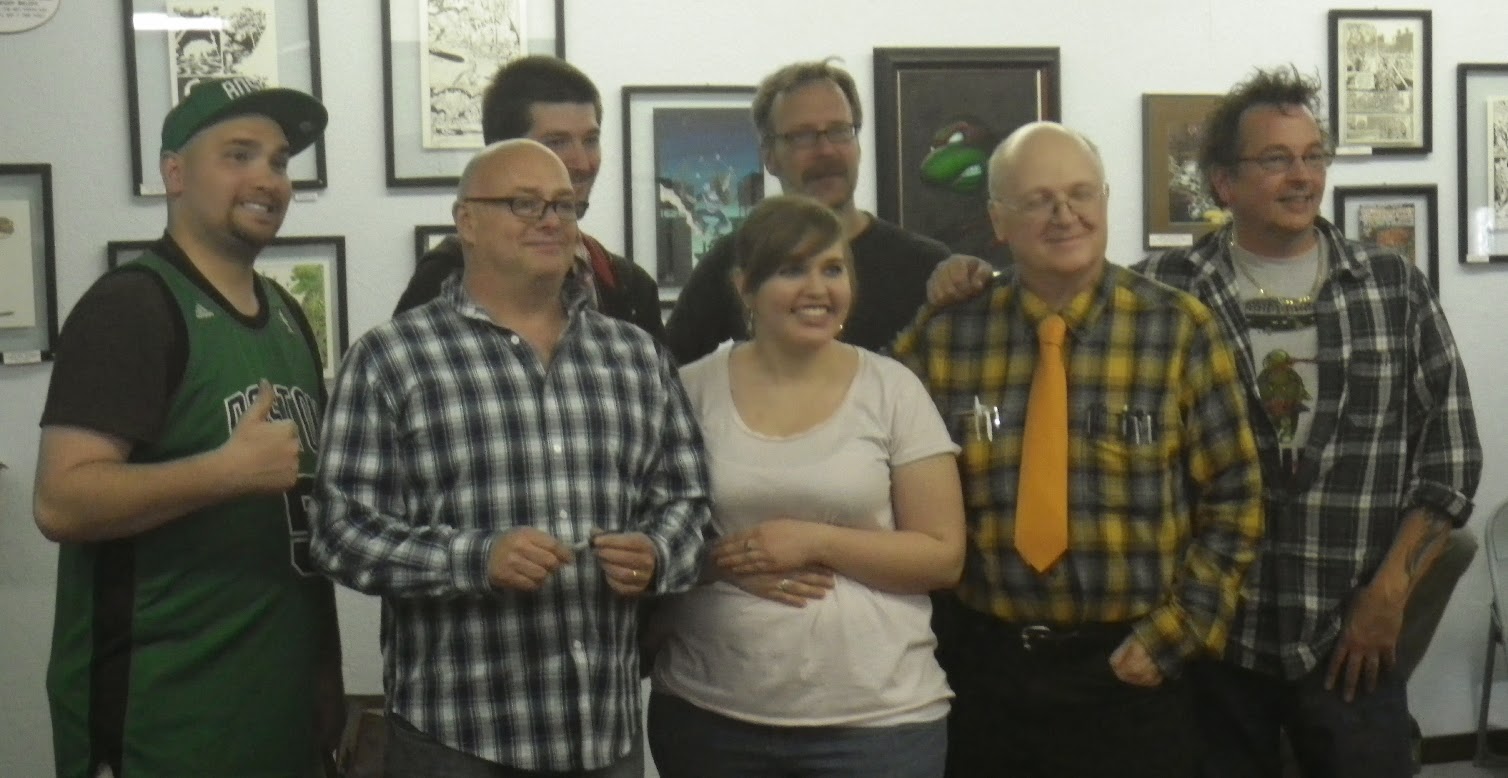 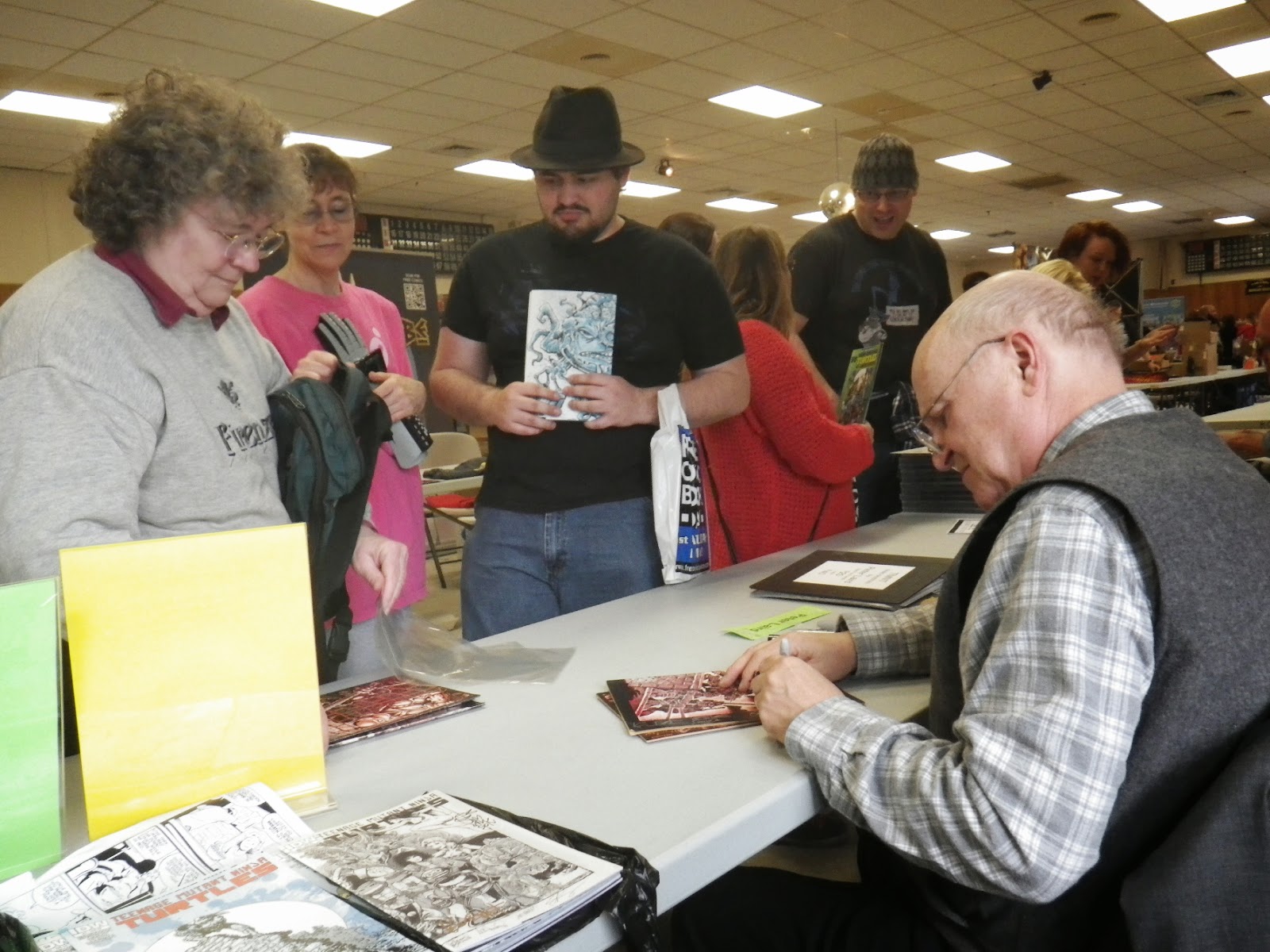 We heard many wonderful personal stories about how the Turtles had touched lives and had great influence in positive ways. One gentleman even brought custom-embroidered honorary black belts for me and Kevin from his Taekwondo school, something he had eventually begun some years after being inspired to take up martial arts as a kid because he loved the Turtles.

We signed lots and lots of stuff, including comics, prints, toys, t-shirts and books, as well as some unusual things -- a samurai sword, two small light-tables, the headrest of a wheelchair, and an iPhone case, to name a few.

I think my favorite moment was when a family came to the table, with the kids dressed like the four Turtles, the mother like April O'Neil in her yellow jumpsuit, and the father like Vernon from the first TMNT animated series. Too cute! 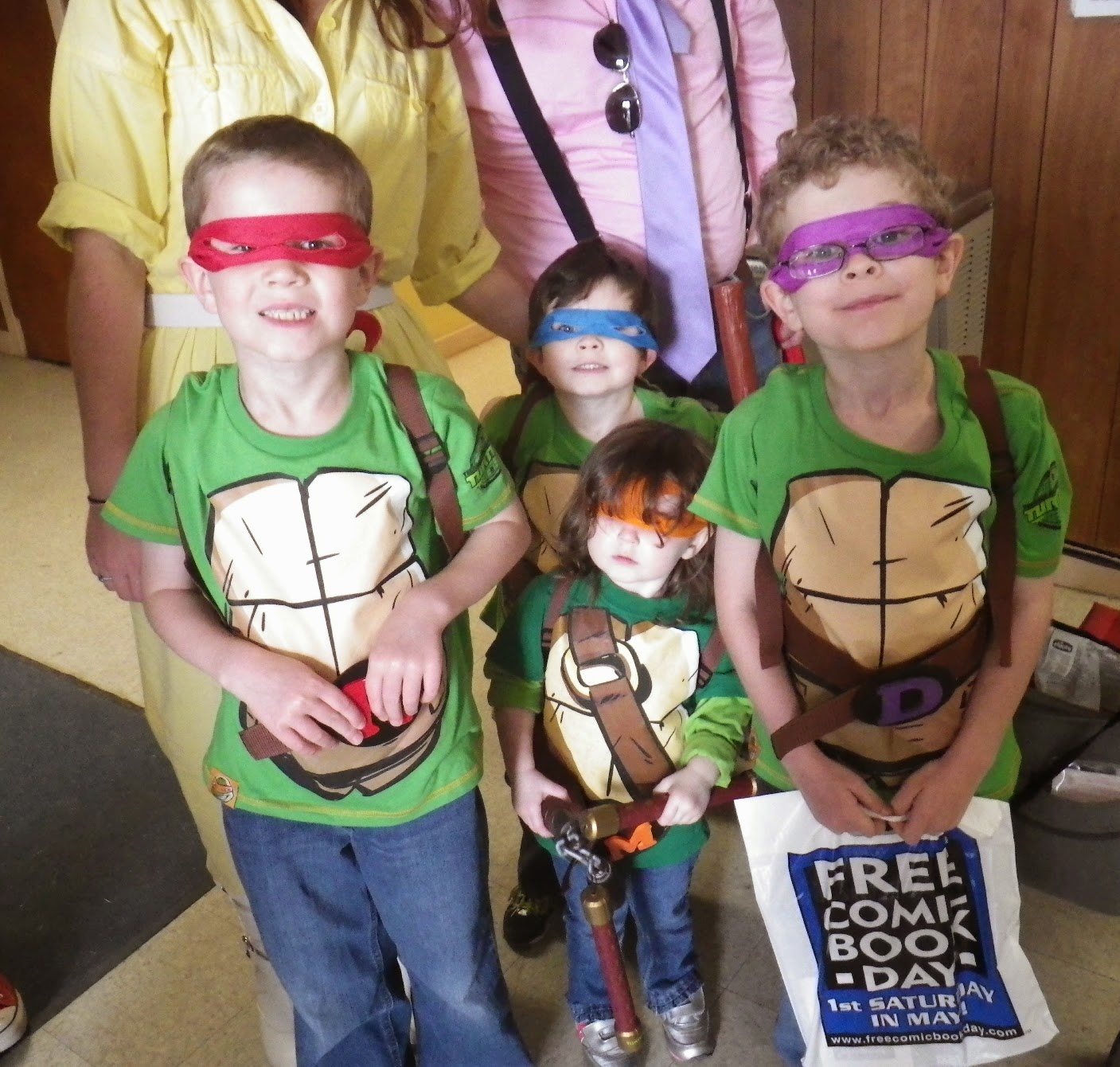 It's a very good thing that the number of things we signed, per person, was kept to three items per person per trip through the lines, as we might still be there signing if it had been more. (And given how much extra time it took to sign everyone's stuff even with that limit, and how many people actually had to be turned away, I think it might have been a good idea to limit it to two items, or perhaps even one.) 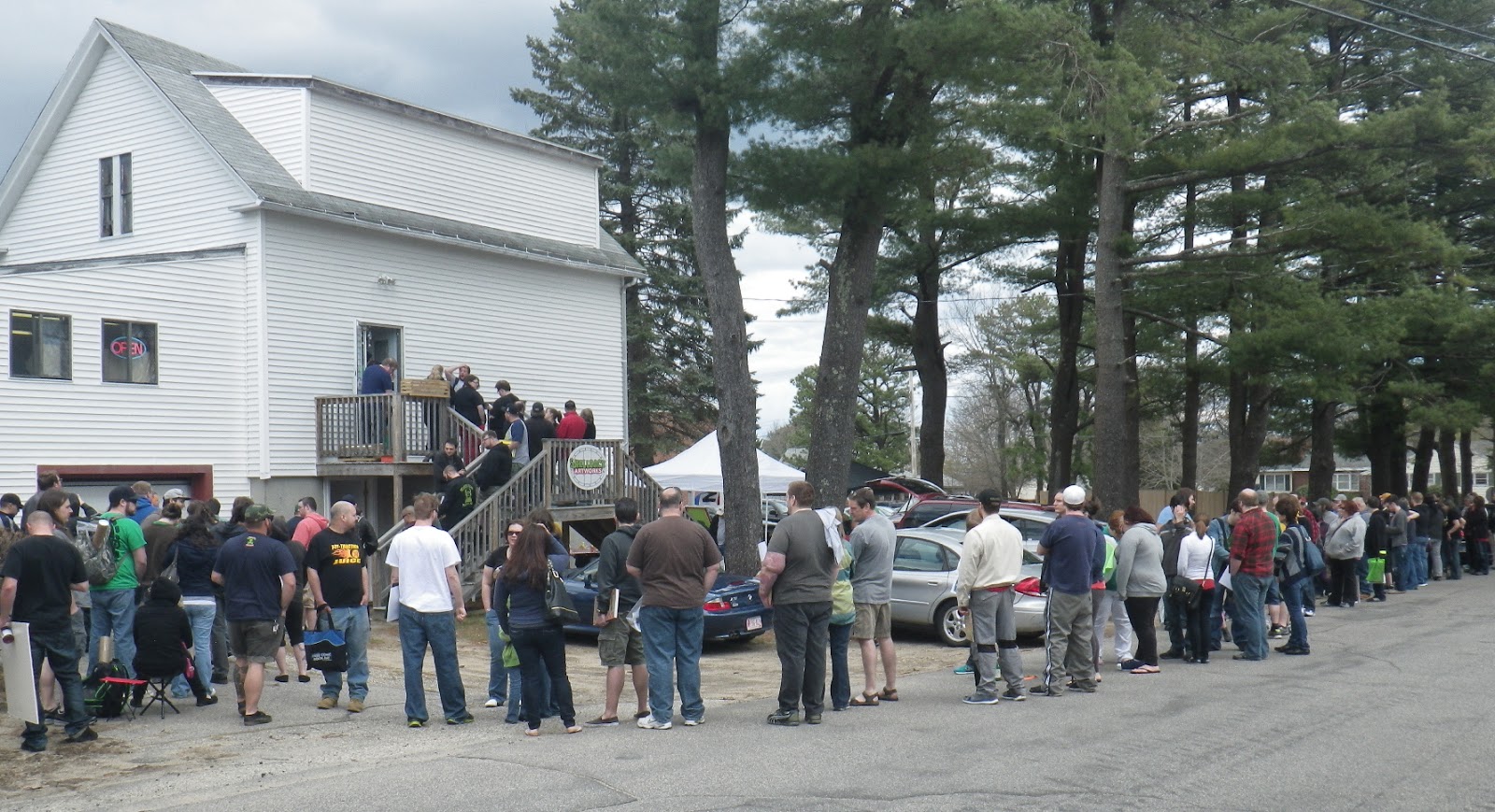 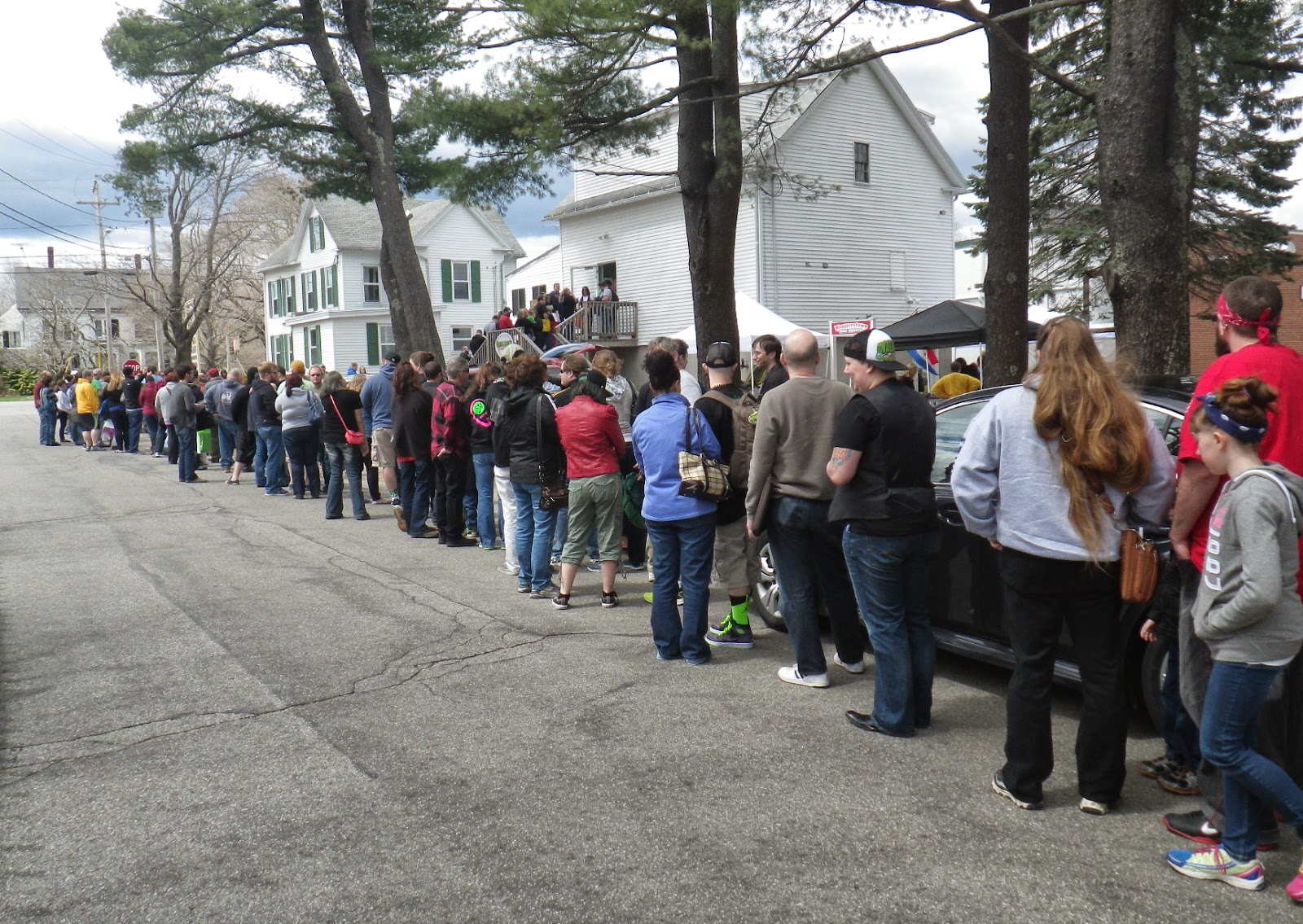 (Two views of the line outside Shellback Artworks... the line also
wound around the inside of the store and up to the second floor!)

As it was, we stayed longer than scheduled, and I will confess that during the last hour of each signing day, especially the second one, as fatigue and backache began to creep over me, I was in danger of completely losing my sense of humor. If not for the inspiration of Kevin, who was determined to sign stuff for everybody who'd waited patiently in line, I very well may have left at my scheduled time and headed for the tranquility and quiet of the Maine coast.

One other thing that helped keep my flagging energy levels from dropping too low was the fact that my brother Bruce, who'd traveled to Maine with me for the signings, and my lovely daughter Emily stayed through the whole of each appearance, offering support.

Near the end of the second day, I was taking a brief break and chatting with Isaac, Randall and Mark, the gents doing the TMNT documentary, who had made the long trip down from Canada once again to see if they could capture some interesting footage from the FCBD events. I told them I'd had this idea -- something I had mused about for some months, perhaps years -- that it might be cool if at some point Kevin and I had the opportunity to return to the site of the house in Dover, where we'd created the Turtles back in 1983, and just reminisce about the experience and the years since. The documentary dudes thought that was a neat idea -- in fact, I think Randall said he'd had a similar one -- and we almost got it together to do the thing that afternoon, but the extra time we put into the signing at Shellback Artworks and the lengthening shadows of late afternoon put paid to that idea.

However, Isaac told me that they would be willing to extend their stay a bit longer and, if the weather cooperated, and Kevin and I could fit it into our schedules, they could be available to do it the next day. So we made a plan to meet in Dover the following morning at 9:30, unless it was raining.

Well, the weather gods were on our side, as Monday morning was crisp and sunny. Bruce and I drove to Dover, pulling in after the documentary crew had arrived. Kevin and Courtney showed up a few minutes later, followed by Emily, who had wanted to be there for the filming. Kevin and I got miked up, discussed what we might do, and then just started talking as we wandered around the small empty lot which once held the equally small house in which the Teenage Mutant Ninja Turtles had come to life.

It was really nice to kind of free-associate with Kevin as we recalled various details about our time there, each of us remembering different things, which sparked other memories. Most of the details of our day-to-day lives from that time are long gone, but some were quite sharp and clear. Kevin recalled how my wife Jeannine (to whom I had gotten married in that tiny back yard in 1983) used to make great muffins (she still does), and I recalled Kevin's practice of rolling up socks and putting them on the arms of his stuffed chair under his lap board, to get just the right angle for drawing. And we both recalled the moment when, after a shared supper, while we were doing the dishes, Kevin stuck a cheese grater over his forearm. Waving it around, he opined that it would make for a cool villain, who could just grate you to death. 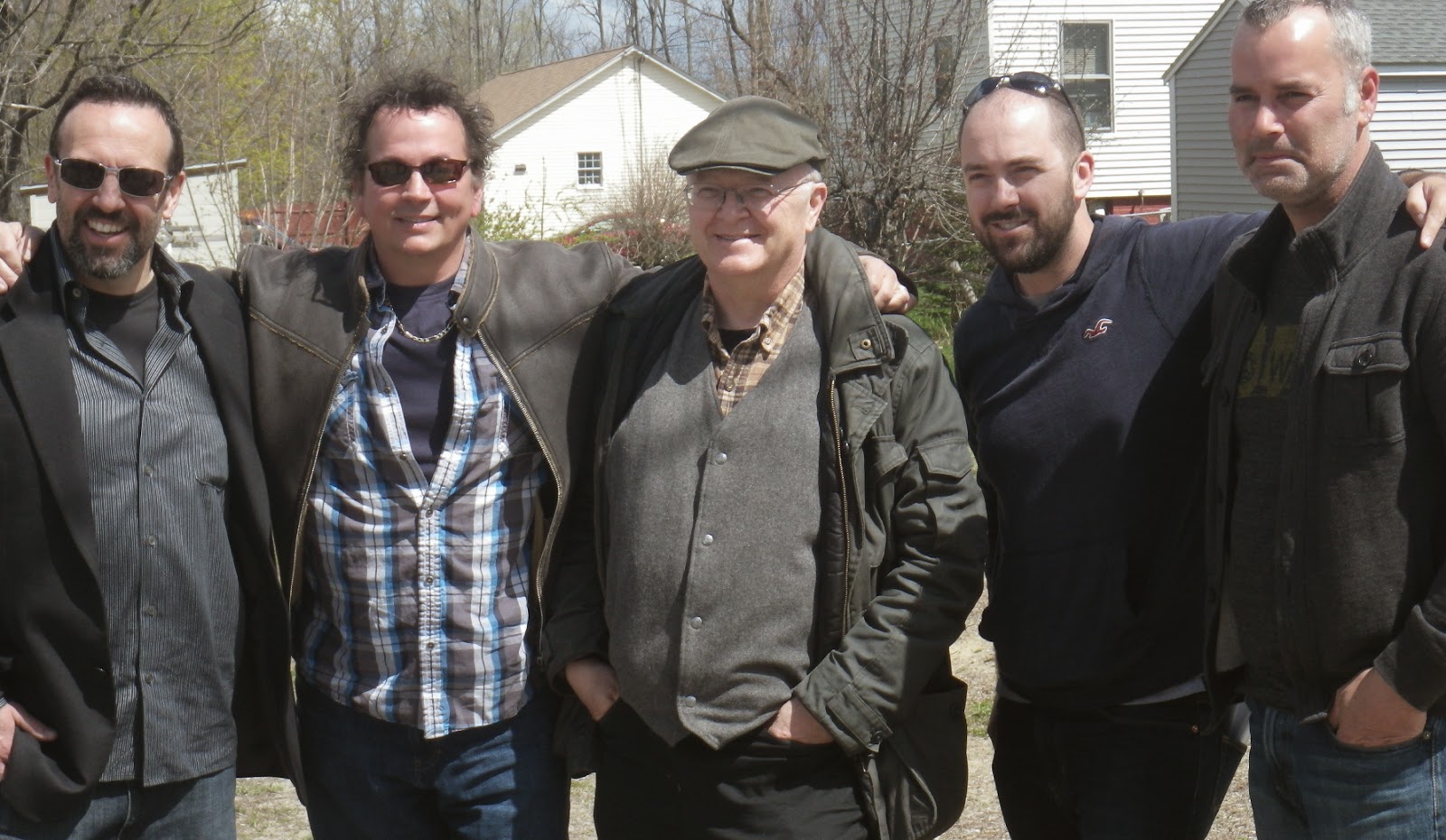 Soon we had to take off the mikes and say goodbye to our Canadian friends, wishing them good luck in getting the last pieces of the documentary together. I know I have said this before, but I really think their documentary is going to blow the minds of any real TMNT fans out there, given all of the time and talent and love they have lavished on it over the last five years or so, traveling all over to talk to people who had been involved with and/or been influenced by the TMNT. Keep an eye out for it!

Bruce and I drove back to Maine to pack up our stuff and pick up my dog Parker, who'd come with us on this trip to the seacoast, then headed back to Massachusetts, stopping once more outside of Concord, NH for a giant dish of ice cream.


(Photos by Bruce Laird. Thanks, dude! Thanks also to Ralph and his crew from Jetpack Comic, and Steve and Denise and their helpers at Shellback Artworks, and to all of the great fans who showed up for these events. And special thanks to the man himself, Kevin Eastman, without whom I would not be writing this today. -- PL)