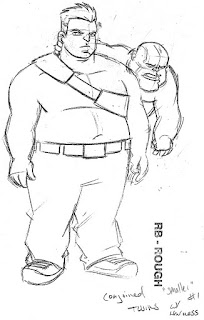 "Garbageman (v.o. cont’d): Here my slaves – once human garbage – now have purpose, recycling it all into my empire!
We go to a conveyor belt, where we see a tied up April, Casey, Raph, Don, and Hun struggling to free themselves.  They look frightened.
Garbageman (v.o. cont’d): Allow me to direct your attention to my latest “acquisitions” – RIPE for recycling!
We reveal that the conveyor belt is moving them all toward a huge, fiery incinerator.  April is closest to the fire. "

The "conveyor belt into the fire" is always a good scary bit, but there's something odd about the Garbageman's obsession with recycling coupled with this big incinerator -- the two things seem to be at cross purposes. I mean, burning things in an incinerator is not really recycling... is it?

"At the junkyard, Don, April, Raph, Casey, the Professor, and his two buddies are assembled in front of a giant submersible of some kind. Don and April are in geek-mode.  Raph and Casey look at each other and yawn…this may be awhile.  The submersible looks familiar to Don, but he can’t quite place it (due to its damaged and rusted state).  The Professor shares a most peculiar fact, he and his buddies found a hot meal just waiting for them right by it.  Lots of food.  Really good food, too.  That’s weird.  Too weird!  Don doesn’t like it.


Just then, April notices a small beeping device on the side of submersible.  It as a timer, and it’s counting down.  Aw shell, that can’t be good!  Don suggests they all head out of there quickly.


At that very moment, Hun appears.  Don whispers to the Professor that things may get ugly and they should beat it.  Hun’s there to make mince meat out of Casey, and the turtles are a pleasant bonus. "

Lots of wacky stuff here. First, this whole "giant submersible in the junkyard" -- and the hot meals left next to it --  bit had me scratching my head. Can a trap be any more blatant? And why a submersible? Especially a "damaged and rusted" one?


Why is a counter counting down necessarily a bad thing? Maybe it's a time lock which is going to open the doors to the submersible. And again -- could we be more blatant? And goofy? Doing this with a trap is like setting a mousetrap but having a little bell that rings when a mouse gets near it -- why warn your prey?

"The Garbageman is pleased that his little trap netted him such a wonderful prize … ready for recycling …here in Recycle World!  Welcome!  Welcome one and all!  The Garbageman showcases Recycle World as we see various images of the gnarled metals and fantastic machines that make up his kingdom of garbage.  It is a Jetsons-like city of gears, incinerators, and shredding machines mish mashed together from scrap metal – all grinding and churning garbage."

Should I be taking the word "city" literally? Seems a bit much -- after all, isn't Recycle World soon revealed to be just a big garbage barge?
Also, Garbageman's "little trap" seems to be ludicrously overcomplicated and not very efficient  -- surely he can get his "raw materials" in an easier way (although we're never quite sure exactly HOW our protagonists were transported to Recycle World).


4.) I'm not crazy about the origin of Garbageman as laid out in this outline, but I have to say that when I read the logline for this episode and saw that Hun and Garbageman were in it, I was IMMEDIATELY struck with an idea -- what if Hun and Garbageman were related? What if, in fact, they are BROTHERS? Think about it -- they share a certain bulky physicality.


We haven't really gotten into much of a backstory for Hun, and this could help to flesh out both him AND Garbageman. One approach might be to say that Garbageman was Hun's younger brother, deformed -- or at least disabled -- since birth... and maybe even a little mentally ill. When Hun became leader of the Purple Dragons and then the Shredder's right hand man, he tried to help out his brother through his connections... maybe attempting to use some of the Shredder's technology to provide him with mobility and opportunity, with the thought that this might also help him with his mental illness. But something went wrong, and Garbageman was born. (Making this connection to the Shredder and his tech might go a long way to explaining how Garbageman gets a lot of his amazing machines.)


His relationship to his crazy brother is one that Hun is obviously not pleased to reveal and/or talk about, and we could use that to good effect in this story. It would also make for a great bit just before a commercial break -- Garbageman calls Hun by name or something, and the perplexed Turtles can say "You guys know each other?"... and Hun, with a look on his face which mixes love, regret, loathing, and a bunch of other emotions, would say "Yeah... he's my brother!"

"Hun removes his belt and uses it to also slide on the wire to the platform, but just as he’s about to make it, his belt snaps (from Hun’s weight) and he falls towards the shredding machine.  At the last moment he grabs the platform.  He is now hanging onto the platform by one hand, the way a person hangs onto a cliff.  The shredder spins beneath him.  Casey and Raph look at Hun with grim expressions.  Hun congratulates them – certain that they mean to let him fall into the shredder.  Raph tells him to stop being so melodramatic and they help him up."

This scene doesn't really make any sense as is, given what we know of Hun and his huge strength -- he could easily pull himself up.

"We dissolve to just outside the Garbageman’s Lair.  It’s an ominous looking building.  There is a weird mechanical lock at the entrance.  Don starts fiddling with it but to no avail – he has never seen anything like it.  Raph steps up to the lock.  Don’s incredulous.  What can Raph do?  With that, Raph lets his fury fly on the device with sai swipes, until <CRACK> the device breaks off and the door opens. "

This scene seemed completely pointless to me.

"Just as Garbageman’s going to slice Hun, Don tosses his bo, which goes spinning towards the Garbageman’s chicken-walking legs, tripping them up.  Garbageman’s machine topples over, releasing Hun."

That's some toss! I just don't see how Don's bo, especially if thrown (remember, it's essentially just a stick), is going to trip up something described earlier as a "huge metal machine (think the two-legged, chicken-walking AT-ATs from Star Wars)". Silly.

"Raph pushes Don out of the way and leaps onto the Garbageman’s hover-disk.  With two furious sai swipes, he slices off the claw arms on the hover-disk, then jams one of his sai into the front of the disk, then jumps off."

Just another reminder that sais are not slashing/cutting weapons, like Leo's swords -- they're stabbing weapons.