Here's photo I took a couple of days ago, in the parking lot near Mirage Studios: 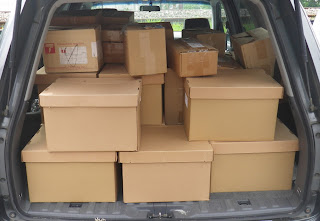 I filled up the back of my car with a pile of boxes of comics from my personal stash of Turtle stuff. It's part of an effort by me to trim down a somewhat bloated collection. Actually, this pile has been waiting for almost two years to get stuffed in my car and brought down to Mirage. (I think my next effort will be to winnow down my collection of TMNT toys, but that won't be for at least several months... unless I am suddenly filled with an unexpected burst of energy.)

Soon, Katie and Dan should be going through all these and cataloguing what's there so we can offer them for sale. In fact, maybe they've already done it! -- PL
Posted by PL at 7:19 AM 18 comments:

Email ThisBlogThis!Share to TwitterShare to FacebookShare to Pinterest
Labels: comics for sale 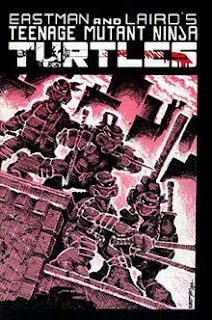 I was going through some old letters a few days ago and came across a copy of one that I wrote to my brother in early 1984. In it I wrote about how Kevin and I had recently gotten our copies of the first issue of TMNT back from the printer.

What surprised me was the mention in this letter that not only did we get the 3000 copies which we'd ordered, but an extra 275 copies as well -- a bit of overprinting on their part which inured to our benefit.

So from now on, when asked how many copies were in that first print run, I am going to have to try to remember 3,275 instead of the much easier round number of 3000.

I'm going to try and upload at least one shot (maybe just a couple of seconds) to the folder. Hopefully give you a better taste of what's to come. I'll do that within the hour tonight under "trailer renders".

Did you manage to do this (above)? Maybe I'm doing something wrong, but I can't find anything like that on the ftp site.

I've been having fun re-watching the teaser trailer Quicktime movie -- tonight I went through it frame by frame a couple of times, and got a better idea of all of the cool stuff the animators are doing with the Turtles' movements. By the way, I love the way that light post wobbles when one of the Turtles lands on top of it -- very nice.

It got me thinking... I'm going to a small comic show in Portsmouth, NH this coming Sunday (the 22nd) -- it's kind of a return to origins thing, as this show is being put on by the same guy who put on the show back in May of 1984 where Kevin and I premiered the first issue of the TMNT comic. I'm even doing a special 3000-copy reprint (same number as the original first printing) of the first TMNT comic with all-new tones and lettering.
I think it would be very cool to do some kind of "teaser print" (maybe a hundred or two) of one or more frames from the teaser trailer, to hand out to the fans who will be there. I've gone through the trailer and have frame-grabbed five possible frames which I think fit the bill of being visually interesting but not giving too much away (though the shot of Leo, Raph and Don in the alley might be pushing that envelope). If everyone agrees that this is a good idea, I would need better/higher rez frames of these shots so that the prints would look best. I would also need to know what to put on these prints to cover all pertinent copyright issues.

Though obviously not vital, I think this is something that would be fun and keep those rumor mills churning. If I were to do this, I would need the higher rez frames by Wednesday of this week. Let me know what you guys think.

P.S. I'm attaching a jpeg of the five frames I grabbed.

btw, that re-release of issue one is a great idea. Did you color it too? Made
me also think that once we get the script underway we could talk about any
comic tie-in - not necessarily the comic version of the movie, but any chances
for us to beef up the story by telling side-stories/prequel things (like Leo's
training) that would add more for a true fan. Could be cool down the road...

I'll send you and Galen each a copy. It's not colored -- I just redid all of the tones, using the Photoshop technique I use on the current TMNT comic, and also relettered it in Quark, tweaking a few small things here and there.
Good point about a comic to tie in with the movie! We should really start thinking about that.