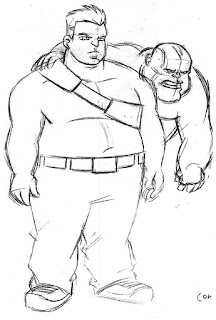 
Before I get into my specific comments, I would like to commend whoever it was who transformed what I considered a weak, non-viable script into one which actually works pretty well. Impressive!


1.) Well, it's not exactly what I was thinking about when I made the suggestion that Hun and Garbageman turn out to be brothers, and it's pretty twisted, but this conjoined-then separated-twins thing actually kind of works. I think we could have gotten a lot more emotional content out of a slightly different approach which would have given Hun and Garbageman more complicated and compelling emotional arcs, but I won't quibble.


However, now that we HAVE established this surprising connection -- one which, if further (and properly) explored, could turn Garbageman into a GREAT character (in my humble opinion) -- it seems a shame to kill him off! (Which is what I think happens, irrevocably it would seem, in this script, wherein Garbageman dissolves in a vat of acid.) I wonder if we should do something which would leave it a little more open-ended, although SEEMING final. Not sure what that would be, exactly. One suggestion -- which I will openly admit strains credulity a tad -- might be that, unknown to our heroes (and Hun) Garbageman is either (a) immune to the effects of that acid through some mutant physiological factor, or (b) he has treated his body with chemicals which allow him to resist the effects of the acid for a short time (something which might be a sensible precaution as operator of Recycle World, with all those carelessly placed vats of acid you can fall into or be splashed by).

It seems a little preposterous that young Hun could run right after such a serious  operation... and unlikely as well that -- if his motive in finding the creepy doctor was to just get rid of his conjoined twin -- Hun would care enough about that twin to have the doctor keep the twin alive during or after the operation.


I would suggest a slightly tweaked version, in which Hun and the creepy doctor strike a deal -- the doctor will do the operation, but as payment he gets to keep the malformed twin for his own sick purposes, to experiment on as he sees fit. But at some point the freak turns on the doctor and kills him, then takes over his equipment and supplies ("recycles" them, you might say) to begin his career as Garbageman.


I would prefer this approach for several reasons, not least because a conjoined twin of this nature could not very likely be easily removed -- it would require extra surgery before its systems (circulatory and digestive are the two that come first to mind) could be self-sustaining.


Also, it would be good if there was a LITTLE bit more shading in Hun's attitude toward his "freak" twin. I can easily see that Hun would hate the freak -- who wants to have something like that hanging out of the side of one's body? talk about impediments to a social life! -- but I think he would also have SOME kind of limited affection for it. After all, it's not the freak's fault that he was born the worse half of the combo. Hun should have SOME little bit of nagging guilt that he callously got rid of his brother. In short, I think instead of a "hate" relationship, there should be more of a "love/hate" relationship (with more emphasis on the "hate" part, I'm sure).


3.) I could see how Garbageman could/would recognize Hun when he sees him -- but how could Hun immediately recognize Garbageman? After all, the last time Hun saw his freakish twin, it was a lot younger and smaller, and besides that, Hun most likely assumes that his twin had long since perished.

"HUN rolls to his feet looking madder than hell when …
ONE OF THE GARBAGE WORKERS lifts a blowpipe (made from real pipe with threads and everything) to his lips and <PFFT>!
ON HUN as a DART <WHIZZES> into his neck.  He staggers, fighting it, but his eyes shut and he falls to the ground.


ON – RAPH AND CASEY start to move in an attack towards the Garbageman.


ON RAPH AND CASEY – DARTS <WHIZ> into each of their necks.  A second later they drop to their knees and pass out. "

There is nothing per se wrong with this, but the obvious question when you introduce such an effective way of neutralizing our heroes is -- why doesn't the bad guy use it EVERY time? I think it would work better for me if something was added to soften up our heroes before they get darted -- like maybe a shock or gas grenade or an electric shock to disorient them momentarily so they can't dodge the darts like they ordinarily would be able to.

The use of the phrase "so going to" sounds much younger than Hun, more like what a teenager might say. And to use "take care" twice in one line seems a bit much. Here's one suggestion for a way to change this line:


"HUN
After I finish with my brother, I'll take care of you pests."

"DRAMATIC DOWN SHOT – of Garbageman falling into the acid.
THE TURTLES AND CO. wince at Garbageman’s demise.  Hun looks on… unmoved.
HUN
Goodbye … brother.
ON GARBAGEMAN’S HAND – reaching out as it sinks into the vat."

I think Hun should not be "unmoved" by Garbageman's apparent demise. No, he shouldn't break down and sob, but I think a little mixed emotions are called for... and this could be sold well by the right reading of the line "Goodbye... brother" and the expression Hun has at that moment.

"ANGLE ON – Hun stands near one helicopter with a PURPLE DRAGON PILOT inside.  Casey, April, Raphael and Donatello stand near the large, open side-door.
HUN
This isn’t finished between us.
CASEY
Hun, it ain’t never gonna be finished between us … until one of us is …
HUN
I know.  But, not today.
Hun addresses the pilot.
HUN
Take them wherever they want to go … and no harm comes to them!  They’re under my personal protection … at least for right now."

I think I know what is going on here -- Hun's life was saved in the bowels of Recycle World by the Turtles and Casey, so he "owes them one"... and thus lets/helps them get away THIS time. Right? If so, I think that should be made a little more clear by tweaking the dialogue here.