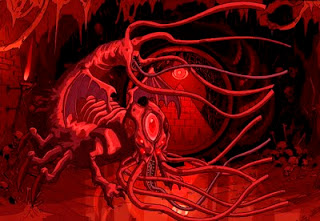 Feb. 13, 2004: Outlines 67 & 68
From: Peter Laird
To: Lloyd Goldfine
In a message dated 2/12/04 5:45:35 PM, Lloyd writes:
<< Howdy Peter!
Just a quick noodge re: your notes on 67 and 68.  Operators are standing
by!
As always, thanks mucho!
Lloyd
>>
Lloyd,
Here you go!
notes on Ep. 68 outline ("The Entity Below")
1.) Re: the following:
"From space, the massive SUN fills the screen, until Mercury slides slowly through close FOREGROUND to block it with a dramatic rumble.  "
Not to be too much of a science nerd, but I hope that we aren't saying here that the "rumble"is the sound of Mercury moving through space. I think a dramatic musical cue would make more sense.
2.) Re: the following:
"We hear DONATELLO’S V/O explaining the phenomenon taking place – a planetary alignment so wide-ranging that it hasn’t occurred in over twenty-thousand years.  The convergence of every planet and over fifty percent of the moons, stretching all the way to Pluto.  "
Science nerd here -- is this "convergence (not sure what that means -- does the writer mean 'alignment '?) of every planet and over fifty percent of the moons" something from real science and astronomy, or something completely made up? Involving "every planet and over fifty percent of the moons" seems a little over the top, and if we could do something that actually HAS a basis in science, perhaps with fewer planetary bodies if necessary, it would raise my science nerd comfort level.
3.) Re: the following:
"We then hyper-drive through the solar system, passing the other planets to stop at Pluto, where we find a stark landscape.  We move across a field of thin reeds, each with clusters of CRYSTALS naturally formed at their tips.  "