Lloyd Goldfine sent me this image a couple of days ago. It's something he and the crew at 4Kids worked up as a possible poster for the "Turtles Forever" animated special. I think it's pretty darn cool... and I surely wouldn't mind one hanging on my wall. -- PL 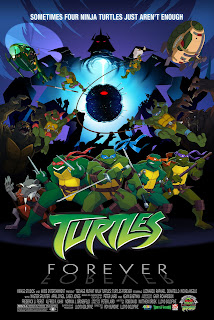 UPDATE 09-16-09! I just found the artist's blog with a nifty entry on how this poster art was created. Check it out at http://e-mannland.blogspot.com/2009/09/turtles-foreverposter.html
Posted by PL at 4:43 PM 38 comments:

Blast from the Past #218: "TMNT Guide to the Universe" cover inks

This art is from the wraparound cover of the Palladium Books-published "Teenage Mutant Ninja Turtles Guide to the Universe", described in a wikipedia.org entry as follows: 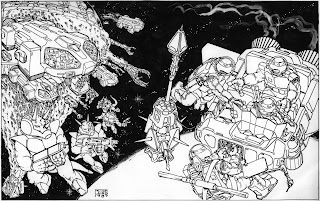 As I recall, I had a lot of fun doing this drawing. I even did the colors on it for the finished published cover. -- PL
Posted by PL at 6:42 AM 8 comments:

Email ThisBlogThis!Share to TwitterShare to FacebookShare to Pinterest
Labels: Blast from the Past, illustration, Palladium Books, TMNT

Blast from the Past #217: Thumbnails for Archie TMNT covers

Over the years, I have tried -- generally successfully -- to save a copy of everything I've drawn. Sometimes they are just tiny scraps of paper with tiny, scribbly drawings on them, drawings that most people would probably just chuck in the wastebasket (and rightfully so). But every so often I run across something that reminds me of the process that one goes through in creating a drawing for, say, a comic book cover. 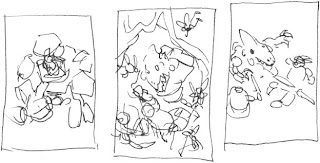 Case in point -- I saved this little piece of paper with three of my small and VERY rough "thumbnails" for three covers for the Archie "TMNT Adventures" book -- from left to right, #'s 42, 44 and 43. (In fact, I think these drawings may literally be about the size of my thumbnail!)

I thought it would be fun to show those thumbnails and then the finished pencil drawings that they eventually evolved into. -- PL
Posted by PL at 9:06 AM 6 comments:

Email ThisBlogThis!Share to TwitterShare to FacebookShare to Pinterest
Labels: Archie, Blast from the Past, cover, pencil, thumbnail, TMNT

Blast from the Past #216: Cereal mini-comics pencil roughs

I'm not sure how I got the job of doing these pencil roughs for the mini-comics that were packed into boxes of the "Teenage Mutant Ninja Turtles" cereal from Ralston-Purina -- possibly Kevin was busy or wasn't interested, or maybe I thought it would be fun and volunteered. Who knows? It's been so long, and it happened during a crazily busy period for Mirage and the Turtles.

In any event, there were three of these things, and they all linked together into one continuing story. If memory serves, I not only did these pencil roughs, but also finished pencils, which were then inked (by whom I can't remember, though it might have been Ryan Brown) and colored (by Steve Lavigne, I think). Wacky, but fun. -- PL 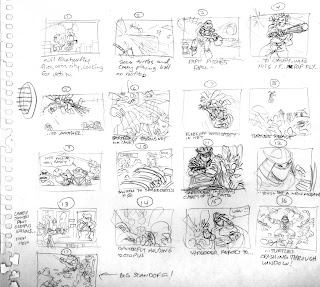 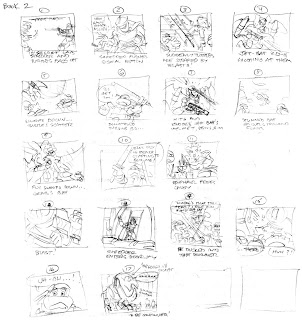 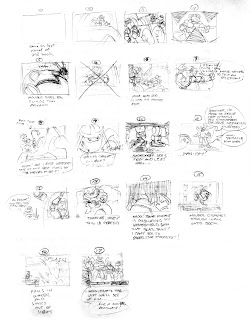 Email ThisBlogThis!Share to TwitterShare to FacebookShare to Pinterest
Labels: Blast from the Past, cereal, pencil, thumbnail, TMNT