Blast from the Past #365: Leonardo pin-up

Here's another pin-up drawing of Leonardo I drew back in 1987. 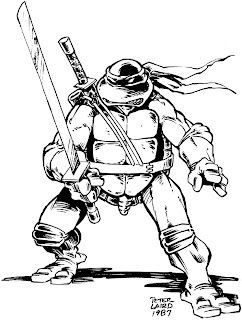 Email ThisBlogThis!Share to TwitterShare to FacebookShare to Pinterest
Labels: Blast from the Past, Leonardo, pin-up, TMNT

Blast from the Past #362: Leonardo wax prototype sculpture 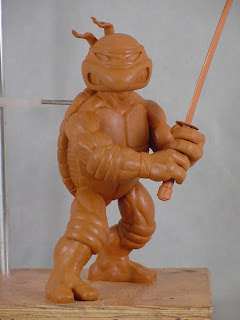 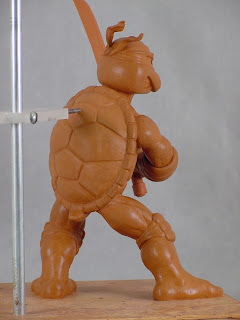 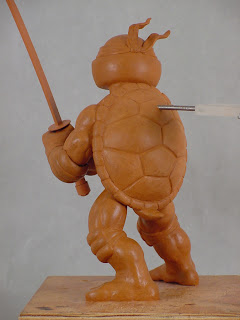 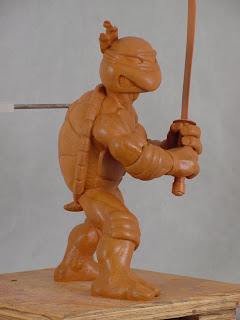 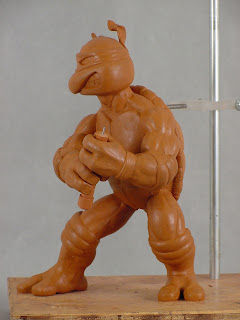 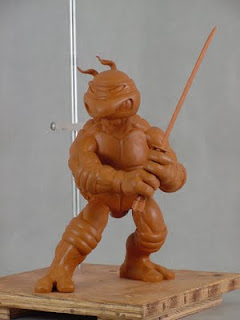 If memory serves, these are photos that Playmates sent to Mirage some years ago to show the progress on the sculpting of the first of the large, cold-cast collector TMNT statues. They chose Leonardo to start with, and as you might imagine, when I saw this sculpture, I was quite pleased. I don't think much, if anything, was changed for the finished product. -- PL
Posted by PL at 9:38 AM 7 comments:

A couple of days ago I found myself in my office at Mirage, with about half an hour before a conference call, and decided to sign the rest of one carton of Fugitoid collector figures. Actually, I don't sign the figures -- just the boxes. Dan Berger usually asks me to do this a few at a time, as we get orders, so I thought it might be good to get ahead of the curve a little bit.

When I sign the boxes, I do a quick little Turtle head sketch on each one, and as I put them back into the carton after signing them all, I thought it looked kind of cute -- all those little white boxes with little Turtle heads on them. 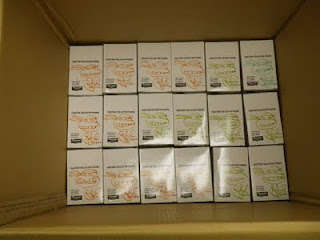 I am pretty sure that this is the fifth "Ask PL" thing I've done -- if I am counting correctly, the fourth one was back on October 20, 2009. That seems like almost a lifetime ago.

Okay, maybe not a lifetime -- that could be just a smidgin of an exaggeration -- but it does seem like a very long time ago for me.

I can't really answer any questions about what is to come for the Turtles via their new owners -- I only know what everybody else knows from reading the press releases and such that have appeared online. Actually, I may very well know LESS than everyone else, because I haven't been following all of the new developments very closely.

And to (possibly) forestall any questions about TMNT Volume 4 -- sorry, I don't know when (or if) I will get back to it, though I hope to bring it to a conclusion at some point in the future, either as comics or simply as written plots. I do want to thank the various fans who have expressed their fondness for Volume 4 and their hopes to see it finished in some way. It is genuinely satisfying to know that there are some of you who appreciated what I -- assisted by the great talents of Jim Lawson and Eric Talbot on the artwork (and Michael Dooney on the painted covers) -- was trying to do with that series.

So, given that I am really doing nothing new with Turtles at this point, I am uncertain what kinds of questions you might want to ask. I guess there are still those twenty-five years of TMNT history that I was part of -- that would seem to be fair game. Or maybe there are non-TMNT (but comics-related) questions you might want to ask -- for example, the one or two people who liked my short-lived "Stupid Heroes" series may have some kind of query.

Or maybe I should expand the intent of this post from simply "Ask PL" to something like "Ask and/or Tell PL", if you just want to say something that isn't necessarily a question. Yeah, that sounds good. -- PL
Posted by PL at 7:37 AM 169 comments:

Blast from the Past #360: TMNT group shot

This is sort of a curious piece. It is not dated, but from the way the Turtles are drawn and the style of my inking on it, I would say it is from the late 1980's or early 1990's. The Turtles have the blank white eye slits we gave them in the black and white MIrage comics… but they also have the initialed belt buckles from the first animated TMNT TV show. And Leonardo has the scabbard and scabbard strap setup from that same show. 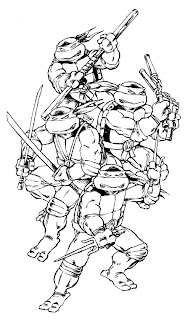 So what is this piece? Why was it drawn? And who drew it? I know that I inked it, but it has a certain look to it -- particularly in the way the figures are posed -- that makes me think it is likely -- or at least possible -- that Kevin Eastman penciled it. I just can't remember much more about it. -- PL
Posted by PL at 5:56 AM 6 comments:

Email ThisBlogThis!Share to TwitterShare to FacebookShare to Pinterest
Labels: Blast from the Past, group shot, TMNT

I don't think I have posted this image before, but if I have, please excuse my faulty memory.

These figures have been resting on a bookshelf in our hallway for the last four or five years. They were given to me by one of the Playmates guys -- I am embarrassed to say I don't remember which one. I think it was when a couple of our usual Playmates contacts came out to Massachusetts for a creative head-banging session in the early days of the TMNT toy line based on the 4Kids 2K3 TV series.

They brought with them these "first shots" of the figures, molded in a clear plastic, and I remember being very taken with this look -- there is something cool about being able to see inside the joints and so forth. So they left these samples with me, to my delight. -- PL
Posted by PL at 6:17 AM 12 comments:

I saw the following on the web today:


San Diego, CA (April 1, 2011) – More than 25 years after its first comic book, the Teenage Mutant Ninja Turtles return to their roots with IDW Publishing. Today at WonderCon in San Francisco, IDW and Nickelodeon announced a long-term agreement to offer an all-new installment of the original Teenage Mutant Ninja Turtles comics and graphic novels. Starting this summer, IDW’s comic series will bring the “Heroes in a Half Shell” back into action. IDW’s new comics are part of a larger initiative to bring Turtles to a new generation of fans, starting with these new storylines from the original series. Additionally, in fourth quarter 2012, Nickelodeon will premiere a new CG-animated version of the wildly popular Teenage Mutant Ninja Turtles franchise.
“Through this partnership, we’re able to introduce Teenage Mutant Ninja Turtles to a new generation of fans, while also providing new stories for the fans who grew up enjoying these comics,” said Paula Allen, Senior Vice President, Global Publishing, Nickelodeon Consumer Products.  “These all-new comics and graphic novels based on the original series will support the overwhelming demand we’ve received from the millions of Teenage Mutant Ninja Turtles fans looking to reconnect with this celebrated franchise.”
Created in 1984 by Mirage Studios founders Kevin Eastman and Peter Laird, the Teenage Mutant Ninja Turtles quickly went from an independently published, black and white comic to one of the most popular brands in the world. IDW’s Teenage Mutant Ninja Turtles will kick off with an ongoing series this summer, featuring new and exciting storylines that also maintain the “turtle power” core beloved by millions of fans. In addition to the all-new series, TMNT fans will also be treated to newly remastered collections of classic Turtles comics, beginning with the original 1980s series that started this worldwide phenomenon.
“We’re thrilled to be a part of Turtles,” said Greg Goldstein, chief operating officer for IDW. “This is one of the most successful comic book franchises ever, and we look forward to exploring new territory with our ongoing series, as well as reliving all the classic adventures.”
The return of Leonardo, Michelangelo, Donatello and Raphael and the rest of the TMNT world begins this summer. In IDW’s all-new, original series, readers will follow their favorite characters on exciting adventures that explore new depths of the TMNT universe.
TEENAGE MUTANT NINJA TURTLES
Visit IDWPublishing.com to learn more about the company and its top-selling books."

I don't know much about IDW, but I wish them all the best with their new TMNT comic project. That being said, I feel the need to correct a small detail, a commonly-repeated error:


"Created in 1984 by Mirage Studios founders Kevin Eastman and Peter Laird, the Teenage Mutant Ninja Turtles quickly went from an independently published, black and white comic to one of the most popular brands in the world."


While the first TMNT comic book published by our Mirage Studios was, in fact, published in May of 1984, the TMNT concept was created in November of 1983. -- PL 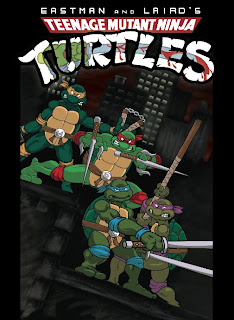 I received a Facebook message today from one Dennis Powder Kennedy, a TMNT fan who wanted to alert me to a recently-completed TMNT fan project -- a redoing (or "remix") of the first issue of the "Teenage Mutant Ninja Turtles" comic book which Kevin Eastman and I originally published back in 1984. As he put it in his message:
"We collectively remade the very first issue of the comics, all in our own style. 1 page per person, though some had 2 or 3. We wanted to do this not only as a fun collaborative project but also to show our appreciation to you & Kevin for the vast TMNT media & love we've received from you both over the years."
I checked it out, and it is quite nifty. The art ranges from very clever and polished to pretty crude, but there is, overall, a nice balance. Some of the more over-the-top changes (like the Shredder's eyeball popping out of his head when Donatello hits him with his bo staff) I could have done without, but for the most part it is a faithful recreation of that first issue of TMNT.
Maybe TOO faithful.
I was kind of hoping that it would be a very different take on what we did in that first issue -- not so much in the story, the dialogue and such, but the layouts and the drawings. In fact, back in 2008 and 2009, when we were working on stuff for the 25th anniversary of TMNT, one of the ideas I brought up several times was essentially this -- but the plan would be to get some established comics artists to each take a page form that origin story and render it in their particular fashion. That project never came together, for a variety of reasons, so it is cool to see it emerge in this fan-created way.
But it is pretty much a shot-for-shot remake of the original. There is nothing wrong with that per se -- I was just hoping for a more divergent approach.
(And it would have been nice to have the pages numbered... and to see actual names in the credits, instead of just Internet "handles".)
Still, it is an impressive amount of work, and certainly flattering to both me and Kevin and our little black and white comic from almost twenty-seven years ago. I appreciate the sincere sentiment behind all the work, and thank everyone who worked on it. -- PL
Here's where it can be found online, in PDF form:
http://mutantooze.org/wiki/?p=1969
(Note: The cover credit is given as "Cartoonistaaron", and I don't know who that really is, so I guess the copyright line for the above artwork should be "©2011 Cartoonistaaron".)
Posted by PL at 6:28 AM 18 comments: