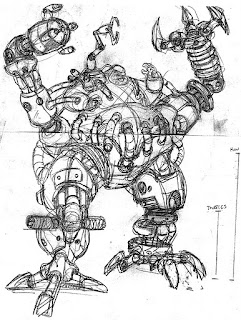 
Before I get into specific comments, I have to reiterate that I think we are missing a wonderful opportunity with this episode to add a lot of depth to two under-rendered character -- Hun and (especially) Garbageman -- by exploiting my suggestion that we reveal that they are brothers. Instead, we basically have a repeat of the previous two Garbageman episodes, with a few details changed, and a silly, cliched origin story for Garbageman.

"CLOSER ON A CONVEYOR BELT – we watch some of the recycling process.  A CRANE drops a LOAD OF TRASH onto the belt.  Instantly CHOPPING BLADES descend on MECHANICAL ARMS to <DICE> up the trash.  FOLLOW THE TRASH as the conveyor belt moves the sliced trash under a HUGE COMPACTOR that comes down to <MASH> all the trash flat.  The conveyor belt proceeds to feed the sliced up, mashed trash into a huge <FLAMING> INCINERATOR (NOTE: the belt runs UNDER the flames of the incinerator, carrying the trash through to be melted, not entirely burned).
GARBAGEMAN (VO CONT’D)
Where the garbage that this city foolishly squanders is harvested – given value, given worth!
FOLLOW THE TRASH on the conveyor belt as it comes through the other side of the incinerator and we see two of the GARBAGEMAN’S WORKERS sifting through the STEAMING GARBAGE on the belt."

I am baffled -- how is this "recycling"? It seems totally ludicrous, done solely so we can have a "Tim Burton-esque" setting. I'm pretty sure that REAL recycling doesn't start with CHOPPING, MASHING, and MELTING, but instead begins with separating your raw materials into different basic groups so you can then determine what you have and what can be reused. Or maybe Garbageman's version of recycling is totally insane... which could be valid, given his character, but then that would affect the rest of the story.

"CLOSER ON THE TWO WORKERS: they are ghoulish, deformed, subhuman looking characters.  Their skin is pressed tight against their skulls.  They have large, protruding eyes (think Gollum from Lord of the Rings).  Their teeth are pointy, their hair disheveled, their skin a sickly yellowish hue.  "

The obvious question here is -- aside from the desire to have a "Tim Burton-esque" look -- WHY? Why do they look this way? Why are their teeth "pointy"? Garbageman later claims that the were "once human garbage", so the assumption is that they are or were human -- how did they become these "Lord of the Rings" rejects?

"A loud <BUZZING> goes off.  The group stops short and looks around, alarmed – except for Don, who looks at his work area.
CLOSE ON DON – his eyes widen as he smiles.
DONATELLO
The Shell Comm!
WIDE ON DON  - running to his work area towards a new device, THE SHELL COMM. – a COMPUTER HUB with FLAT SCREEN MONITORS SUSPENDED ON METAL ARMS and lots of DIALS, BUTTONS and SPEAKERS."

This is SO dumb. Are we REALLY supposed to believe that this is the first time the Turtles have heard the "Shell Com"'s buzzer, so that they're "alarmed"? A buzzer -- yeah, that's pretty alarming. And the description of this "Shell Com" thing sounds ridiculous, considering that Don had, three seasons ago, created the Shell Cells, which were apparently a lot more sophisticated than this thing.

"OTS DON as he takes a SEAT at the Shell Comm’s console.  A monitor before him ignites, on the screen is APRIL O’ NEIL."

"Ignites" does not mean "turns on", it means "starts burning". Or is this a new retro-tech Don has come up with -- candle-powered monitors?

"DONATELLO
See you at the junkyard in half hour!"

That should be "half AN hour".


CASEY AND APRIL pass out to the floor, shrouded by black smoke."

Considering that he says this AFTER they've all started choking and passing out from the gas coming out of the submersible,  this is REALLY dopey timing for this Casey line.


7.) This whole "Trojan Horse" bit with the submersible in the junkyard strikes me as really silly and lacking in logic. How did it get there? How does it leave? It seems to me that something that weird would garner a LOT of attention coming and going.  And it's a SUBMERSIBLE, right? Wouldn't it make more sense if it were found somewhere near WATER? Also, why does Garbageman bother with this "dependent on sheer chance" method of gathering his "human garbage", when in his very first appearance he had a much more efficient way of doing so (his amphibious vehicle camouflaged as a garbage truck)? I appreciate the need to somehow get our characters into Garbageman's clutches, but this just seems really weak and contrived.

"HUN
If this is some trick you sick freaks pulled, I’m gonna tear your heads off and use them as Xmas ornaments."

So how is Hun going to say that -- "Xmas" or "Christmas"? Can't the writer be bothered to actually write out "Christmas"?

"ON A GARBAGE WORKER - furiously shoveling COAL into a FURNACE with a SHOVEL.  PAN LEFT past the furnace to see an ASSEMBLY LINE, where another GARBAGE WORKER greedily sifts through TRASH."

So Garbageman, with all his high tech devices, uses a COAL-burning furnace?

Garbageman (or the writer) obviously doesn't know what a closed system is -- one where nothing comes in and nothing goes out. That is clearly NOT what he has set up here.


11.) Garbageman's "circus freak" origin story is about as hoary a cliche as you can get.

"Casey and Hun find a PIPE and a STOP SIGN respectively and smash a blade apiece, but two blades lower to take the place of the blades they smashed! They keep swinging!"

"RAPH dodges, then <SMASHES> two blades with his sai, breaking both!"

Maybe these are just the "practice blades", not the real ones which are supposed to chop up the garbage. Or somebody sold Garbageman some cheap imitation counterfeit blades. Sheesh.

"HUN
I’m gonna kick that fat psycho’s butt, right after I “recycle” you Jones!
HUN and CASEY leap for each other angrily and start fighting.
CASEY
Yeah…your mother!"

This action is SO dopey... and makes both Hun and Casey seem like complete morons who can't see IMMEDIATELY that escaping their imprisonment by this whackbag Garbageman takes precedence over their feud with each other.

"DONATELLO
I’ve seen Garbageman tech before… Disable one, and they all go down"

Isn't THAT convenient? When did Don see this? I don't remember any incidents from Garbagman's past two appearances that would lead to this conclusion. And what does it mean, anyway? "Disable one, and they all go down" -- one WHAT?

" The conveyor belt drops everything into a HUGE SHREDDER.


CLOSE ON OUR HORRIFIED HEROES AND HUN.  Hun points ahead!

Hah. Hah. This might ALMOST be funny if Raphael didn't repeat pretty much the same gag after the break.

"ON PLATFORM– Hun grabs the BO and THE TURTLES AND CASEY hoist him up. Hun is stunned, incredulous, wide-eyed, touched.
HUN
You…saved…me…WHY?"

While I have no problem at all with a scene which has the Turtles and Casey saving Hun instead of doing nothing and letting him die, this one is just dumb. This is HUN, remember -- the guy who can swing lampposts like they're toothpicks. SURELY in this kind of situation, he could pull himself up!

"THE GROUPS POV of the platform leading to the corridor – a ways down it is GARBAGE WORKER #1 carrying a WHEEL BARREL OF TRASH."

A "wheel barrel" -- is that anything like a WHEELBARROW?

"ON GROUP – on Casey’s order they charge after him.
CASEY
Get’ em!"


20.) The whole scene with the worker is, to put it mildly, wacky. First, our group charges after this poor guy -- why? Then Raph immediately wants to just beat the crap out of him -- why? Then Don stops Raph from hurting the guy, saying that they need to find out from the guy where Garbageman is (huh? why do they need to know that?) and how to get out of Recycle World... but doesn't even ASK the guy anything! (Bizarrely, Don even promises that Raph can beat the guy up later if Raph's good.) And then everybody stands around watching as Hun tortures this guy, breaking his bones, and nobody lifts a finger. And to cap off this stupidity, Don and Raph have a fun little conversation about how "good guys" can't torture people, but lucky for them "bad guys" like Hun can, all while this worker -- who has done NOTHING to any of them, and is obviously one of Garbageman's VICTIMS -- is brutalized by Hun. This is APPALLINGLY bad writing.

"THE TURTLES, CASEY, AND HUN look utterly horrified as they look off camera.
REVERSE – the lights reveal the GARBAGEMAN.  "

"CLOSE ANGLE ON DON - the SERPENT’S JAWS are headed for his head.  SUDDENLY - RAPH leaps in and <STABS> at the serpent’s “neck”.
The “HEAD” flies off, the arms coils loosen, Don wriggles free.
WIDER – GARBAGEMAN watches the action!  The arm extends forth a new SERPENT HEAD (from the “neck hole” left by the first head) then CHOMPS DOWN AROUND RAPH’S TORSO and hoists him in the air.
ON RAPH - the SERPENT ARM sends <ELECTRICTY> surging through it, <ZAPPING> Raph, keeping him in a painful electrical stasis. "

This stuff is painfully cheesy. I like how the magical head-replacing serpent arm only remembers that it can send electricity through itself when it's holding Raph, but doesn't do it to Don. Bad, bad, bad.

"CASEY wails on GARBAGEMAN’S OPPOSITE SIDE with two bat-sized PIPES.  "

"GARBAGEMAN
You had “opinions” about my work, perhaps you be recycled first?"

Should that be "you should be"?

Buy this writer a dictionary! It's "whaling", not "wailing".

"FOLLOW CASEY as he runs to a nearby PILE OF TRASH and picks up a giant TIMBER SAW BLADE.  He runs to the base of the CLAW ARM holding APRIL and <SLICES> the arm clean off. "

I don't get this action at all. A "timber saw blade"? You mean one of those things that is used to cut WOOD? And Casey simply picks it up and casually slices through a METAL arm?

"Garbageman hangs on to the damaged catwalk for dear life.  It <CREAKS>, giving way.
THE TURTLES get as close as they can get to him on their (undamaged) catwalk.  Don reaches out with his BO.
ON GARBAGEMAN – he reaches out, but at the last second, the catwalk gives, dropping him into the acid below as it falls.
GARBAGEMAN
<FRIGHTENED YELL>
DRAMATIC DOWNSHOT – of Garbageman falling into the acid. "

Let me see if I understand this. Shortly before Garbageman is dangling over the vat of acid, the Turtles are willing to push over another vat of acid, the plan being that the acid will rush towards Garbageman and his partially-disabled walker machine and (apparently) destroy both him and the machine. They clearly don't care if Garbageman gets caught in the "river" of acid that they make flow toward him. But now, for some reason, they want to SAVE him from being dissolved in acid. WTF?!

" RAPH
Hey, that oversized noggin of yours sure came in handy when you climbed on up and fried those robo blade arms.
DONATELLO
And nice assist on the lock to Garbageman’s lair.
DONATELLO (CONT’D)
By the way, thanks for getting “mean and green” on Garbageman when he had me in his claw.  I thought he as going to drop me in that acid for sure.  You really raised some shell, Raph.
RAPH
Aw…that was nothing…compared to your idea to tip over the acid.  Hey…who needs Leo and Mikey…we are the Teenage Mutant Dream Team.  Gimme’ some green!"

This congratulatory exchange seems completely pointless to me, reiterating as it does action we've already seen, and for no apparent reason.