Blast from the Past #370: More notes from the development of the 4Kids TMNT series

This is from August 2003, and is my response to an email from Lloyd Goldfine. Actually, in looking back to make sure I wasn't repeating myself, I realized that this exchange actually occurred right before the one I used to begin this series of "behind the scenes" looks at the development of stories for the 4Kids TMNT series, in BftP #296. -- PL


From: Peter Laird
To: Lloyd Goldfine

Just got your note about being out of town. We're sending out scripts
and models and stuff, as well as still waiting on notes on the revised
outlines - will you be sending any more notes this week, or should we
just keep moving?

Tonight and tomorrow night, while I'm still in Maine, I will try to respond to whatever I am sent. Below are some comments on a few things.

84. MICHELANGELO
You’re a little short for Junk Trooper, aren’t you?

While Leo uses his stinger swords to block and parry the Queen's deadly claws, Mikey taunts and
Posted by PL at 7:43 AM 5 comments:

Blast from the Past #369: More development notes from the 4Kids 2K3 TV series

Here's another bit of history from the development of the 4Kids TMNT series. This somewhat short email is one I sent to Lloyd Goldfine in January of 2004 -- on my birthday, no less -- about the initial premise for the episode about the monster on Wall Street (can't recall right now what the title for that episode was). -- PL
-------------------------
January 27, 2004
To: Lloyd Goldfine
From: Peter Laird
Lloyd,
Comments on Ep. 66 premise:
Curiously, I don't really have many specific detail comments on this one, just some larger overall comments. It's funny to me that when I started reading the story, I began to think of changing it so that the creature had a long history of being in servitude to a long line of the same family -- and then that was what was in the premise!
I think that basically I like this one, but it needs some remolding. This has the promise to be a substantial tale, but only if we really transform it. One thing that I immediately latched onto was the mention in the early part of the premise that this building was on Wall Street, heart of the financial district. And it occurred to me that it might be cool if the monster wasn't necessarily in thrall to the family that keeps it, but that it could be more of a symbiotic relationship... that while the monster provides insights/knowledge/whatever to the members of this family, it feeds off the greed of the family -- greed that it promotes and enhances with its powers. (And isn't Wall Street -- rightly or wrongly -- seen by most people as the center of rapacious greed in this country?) It could be that the members of the family THINK that they have kept the monster captive, but it's really the other way around -- IT has enslaved THEM to feed its psychic hunger for greed over the centuries. (And we could have wicked fun with all of the evil things that this family did in pursuit of money, based on real events from history -- from selling smallpox-infected blankets to the Indians to covertly working with the Nazis during WWII, etc.)
I also think that while the idea of the latest (though not necessarily LAST) member of this family wants to end the perverse relationship with this monster, it would be cooler if he (or she) walls it up both physically and magically (with mystic symbols and the like) in an effort to deny it its sustenance (greed)... and this effort, while initially successful (begun a few years ago?) is thwarted or at least seriously set back by the damage from the Triceraton invasion which broke open its cage. And now it is sending its psychic feelers out, drawing to it those who can be enslaved to greed. (Maybe this is why the kids have been going into the building -- they hear its call.) I think it might work better to if the person the Turtles encounter who explains all this to them is not an old man (or woman) but a younger one.
While the Indian hatchet is a cool prop, I'm not loving the "poke the monster in the eye and it will be defeated" bit. I think instead we should think up a more clever way to defeat this thing.
I think the whole "Turtles experience nightmares induced by monster" bit could very successfully be tweaked to reveal more of our characters' personalities/dreams without the cliched "vampiric April" and "monster Raph in mirror", etc. What I suggest is that the monster does in fact ensnare them, but instead of nightmares, it reaches into their minds and creates scenarios based on what they desire -- attacking them at their weakest. For example, Leo could dream of being a great warrior hero, lauded by the masses and set upon a throne, a Shogun. Mike could be seen with all of the snack foods and toys and STUFF that he could ever want in a giant mansion or estate (think Michael Jackson's Neverland Ranch to the tenth power). Don's fantasy might be of having access to any kinds of technology or gadgets his heart desires. And so on.
Now, they could struggle and eventually free themselves in a manner like what is in the premise, but I was thinking that it might be even more fun and cooler to bring Splinter into the scenario, and have the twist be that HE can defeat this monster because, as a master of Zen, he desires NOTHING ... and it drives the greed monster crazy.
I also wonder about bringing Angel back in this story, which doesn't really seem to have much to do with her or her brother -- they're just convenient props to get the story rolling. To my mind, it might work better if it were either April or Casey or both of them who bring the Turtles into the fray.
Also, I don't think this creature should be amorphous and bloblike -- it should have a really weird, Cthulhian-type anatomy.
-- Pete
Posted by PL at 5:30 AM 10 comments:

Email ThisBlogThis!Share to TwitterShare to FacebookShare to Pinterest
Labels: Blast from the Past, development, Lloyd Goldfine, TMNT 4Kids TV show

Blast from the Past #367: pencil drawing for cover of Archie Comics' "TMNT Adventures" #41

This is interesting to me for the idea more than for the drawing. Where did I get the idea to have those two characters reflected in Leonardo's sword blades? 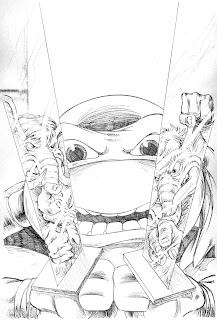 At this point in time, I can't recall. But it worked pretty well, even if logically and optically unrealistic. -- PL
Posted by PL at 6:45 AM 17 comments: