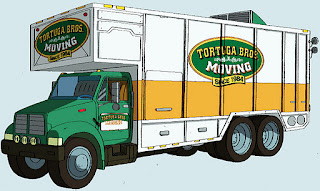 "Casey and April are about to go out on a date. April’s all dolled up in a trendy biker outfit, expecting a romantic motorcycle ride to be Casey’s style. Casey, on the other hand, shows up in a sharp looking suit and his hair pulled back (Steven Seagal style) betting April will be looking forward to a fancy dinner at a 5 star restaurant. A simple misunderstanding, but an awkward one. As they argue about what the date is supposed to be, April pulls Casey close. "

Let's keep the "arguing" to a minimum, please. As I have said before, I think it's tired April/Casey shtick. And I think perhaps to emphasize the difference in their ideas about what each other wanted out of this date (shades of O. Henry!), April should not be "all dolled up in a trendy biker outfit", but rather in some kind of more rough-hewn casual outfit -- ripped jeans, scuffed leather jacket, etc..

"It’s Leo, Mikey, and Raph; with a very sickly Donatello in tow. They need to run off and deal with a pressing mutant threat, but Don is too sick to go, and the brothers need someone to look after him."

There's something about this that bugs me. Does it really make sense that the other three Turtles would lug an obviously sick Don all the way from their new lair to April's apartment (a) on the off-chance that she would BE there, and (b) she would want to babysit a sick mutant turtle? Wouldn't Splinter, back in the new lair, be at least as capable of taking care of Don, and wouldn't Don be better off there, in the comfort of his home surroundings?
One way to make this work would be to establish that the Turtles were out on some mission in the city, and DURING that mission Don started to feel very poorly, and rather than go all the way back to the lair, HE suggests that they  might try to see if April is home and if he can crash there for a while. And if we did it that way, I think we should NOT have him be feeling TOO sick at that moment -- just enough so that he feels he needs to chill out.
Another idea would be to have him stay at the lair and the Turtles interrupt Casey and April's big kiss scene with a Shell Cell call, asking them to come and sit with him. (Although if Splinter were there, would that be necessary?) It seems the writer wants to have a big fight scene in the antique shop, and if that is key to this episode, I guess we should keep it set there. But maybe it isn't.

"As they settle the sickly brainiac on the couch, Leo fills April in on why they have too rush off; they have to “clean up” any mess this newest outbreak causes before the epidemic gets completely out of control."

Let's make it clear that the Turtles don't think they can do it ALL -- it's way too big a job for just them -- but they are trying to do their part, the part they are best at (kickbutt ninja monster squishing action), and the city (police, firefighters, etc.) can do the rest.

"and maybe even bizarre mutant Turtles (can we do that?)"

"April’s apartment sinks into complete darkness. Casey and April tell Don to sit tight; they are going downstairs to the antique store to get candles and flashlights, etc. "

This makes no sense. Why would April keep candles and flashlights in the store and not in her living space? If we really need to get April and Casey out of the room for a few minutes so Don can start hulking out, maybe the plan could be that April and Casey are going down to start the emergency generator she has in the shop. (It could be something that DOn had once helped her set up, for these kinds of emergencies.)

"Don starts to “hulk out”! We hear the tearing of cloth as his mask, arm pads and kneepads tear against his grotesquely expanding body."

" Just then, a bulky shadowed figure (a few inches larger than Don) darts from behind the kitchen counter and out April’s door, nearly breaking it off its hinges. "

I think that Don has to grow more than "a few inches" in order for his mask, arm pads and kneepads to tear off.

"Then, April and Casey spot a frightful shadow against a wall. It is of a large “turtly” body. It’s morphing, becoming larger, contorting and twisting! Spikes (or some such) rise on its back."

I very much want to use the design that Jim came up with for the mutated Raph in the Mirage TMNT comic, rather than some over-the-top number with lots of spikes and such.

" “Donny” again warns them to stay away, and then makes a dash for the store door and staggers downstairs (where Kirby used to live)."

This, and the later bit where April and Casey take refuge in the old back storage room of the store (where the Shredder trapped everyone in ep 18), raised a question for me, which I suppose I could answer for myself by going back and re-reading the appropriate scripts, but maybe you have the answer. Unless I'm really off, this building is NOT the same one as the one which the Shredder and the Foot attacked. I believe that one was burned down, and this is a NEW one... and if so, would likely NOT have the same features as the last one. I could be wrong, but...

"April quickly rifles through some heaps of old machinery in the room to find stuff she can use for an S.O.S. Casey discovers an old car battery. She finds a beat up radio. Casey brings the old car battery back to life, and April rewires it to the radio to send a distress call to Leo’s ShellCell."

This "super McGuyver-April" bit is really ridiculous. What is April doing with "heaps of old machinery" in her storage room? And it makes just as much, if not more, sense -- and probably helps to ratchet up the tension -- to have the other Turtles simply return at that moment. I mean, they WERE going to come back for Don anyway, right?

"The only way out of this storage room now is the access tunnel to the sewer (great idea Mike)."

Continuity question -- was the sewer access door in this old storage room? I know we introduced this concept in one of the last few scripts, but I don't remember it being in this room.

Pull it around from WHERE???!! I don't recall anything to indicate that this truck was nearby.

"Leo and Mikey stay down below, fighting and taunting the monster, "


Taunting? What is there to indicate that the monster that Don is now would even respond to taunts? And doesn't it seem a bit cruel for the other Turtles to TAUNT Don in his unfortunate state?

Two questions. First, has Don already tricked out this new van with gear that makes it their "mobile command center"? If so, it's sure to get trashed if they do this. And second, how tough is this van? If it hasn't been reinforced in some way, I would think it wouldn't take very long for Monster Don to bust out of it, even with the convenient "heavy chain".


14.) Actually, I really don't like this whole bit where they trap Don and bring him to the new lair. It's really kind of goofy (and how does Monster Don fit through all those manholes, anyway?) and as mentioned in point 13, there are some significant logic issues with "trapping" him in the van. I think something more clever is in order, and one thing to address is how they get Leatherhead to help them so easily and quickly. I think if we can work out some kind of way for the Turtles to render Monster Don unconscious, perhaps with some weapon that they might have been trying against the mutants, it would help make all this make sense.


One thing that might help in working this out is the fact that (well, as far as I'm concerned, anyway) all of this action really doesn't have to happen at such a continuous breakneck  pace. For example, it might make a LOT of sense for the Turtles to lose Monster Don in the sewers for a while, and they go back to the new lair and really work out a GOOD plan for finding, capturing, and holding him. This might be the time when they get hold of Leatherhead and enlist his aid -- not only would Leatherhead's great strength help them out, but he might also have some gizmos or weapons that would allow them to tranquilize Monster Don. Maybe he's actually been working on something that could be used to capture/pacify HIM when HE gets out of control.