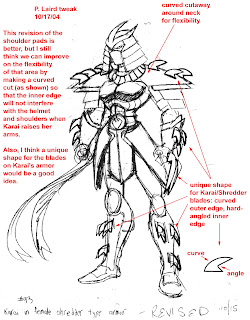 
Here are my comments on Ep. 94 second draft.


1.) Although it is now somewhat improved, I'm still not loving the "Leo vs. two Shrednaughts" bit. I will say again that I do not want Leo to be "Super Leo" now -- he does have some new skills after his training with the Ancient One, but let's not forget that the important thing from his sojourn with the Ancient One was that his soul was healed.

"*P.P. FOOT NINJA
We just received a report…  The two units stationed in the lair were destroyed.  We found signs of damage from double katana.  (PRON. “kah-tah-nah” all even in stress).
CLOSE ON- A wicked smile comes to Karai’s face.
*KARAI
Excellent.  I can finally eliminate Leonardo…  Deploy all available Foot Ninja.  Leave no part of this city un-searched.  I want him brought to me alive, if possible… not alive … just as good."

I get the feeling -- by the way she is described here (a "wicked smile") -- that if Karai had a handlebar mustache, she'd be twirling the ends of it. Why, when she just tried to wipe out the Turtles when she attacked the lair, does she now want Leo brought to her alive if possible? And why is the destruction of two Shrednaughts and their human pilots "excellent"? I would think she would be pissed that they were lost. And let's lose the "wicked smile" -- she should be DEAD SERIOUS.

"*LEONARDO (O.C.)
Who else in New York is gonna have a footprint like this besides a mutant turtle…"

Maybe the writer intended something different, but the way this is written it seems like Raph's helmet magically appears on the ground while Leo glances away. Otherwise, why didn't he see it the FIRST time he was looking down?

"CLOSER- Leonardo <CROUCHES> ninja style as the three Foot Ninja <RUN> out of FRAME.
CLOSE ON- Leonardo’s eyes shift and look.
*LEONARDOS POV- Barely visible through overgrown vines, and greenery, is a door.
*Leonardo <LEAPS> toward the door.  He <STRUGGLES> to open the door, with a <CREAK> it opens. Leonardo looks across; the Foot Ninja are near.


*INT. ABANDONDED RESERVOIR PUMP STATION – NIGHT
PAN DOWN TO- Leonardo crouches by the slightly cracked door as the shadows of a few Foot Ninja pass by.  He then, securely <SHUTS> the door."

I think it's a mistake to have this little "hide and seek" thing between Leo and the Foot Ninjas happen so close to the site of the Turtles' future lair, as if he disappears in its vicinity while being tailed, that's a red flag for the Foot. I think he should lose them earlier and then take refuge in the pump station.
Also, Leo enters this place pretty easily... which makes me think that if it's that easy to get into, sitting in the middle of NYC it would be a favorite hangout for street people. Maybe we should make it harder to get into -- maybe Leo should find a subterranean entrance.

"*The Turtle Tunneler (ep. 93) comes through the wall and into the sewer – LEAVING the FRAME.  A moment later, the Shrednaught follows flying through the hole and into the sewer.
CLOSE ON- The underside of the TurtleTunneler.  A small square hatch is KICKED open REVEALING Michelangelo.  He CRADDLES Klunk, <DIVING> and <ROLLING> away from the moving vehicle.
CLOSE ON THE TURTLE TUNNELER– as a shot <BLASTS> the back wheel of the TurtleTunneler.
The airborne Shrednaught <FIRES> again from its mini-cannon."

"*LEONARDO
Time to bring them home … if we only had one …"

As it is clearly Leo's intention to make the pump station the new lair (recall his previous "This place … has potential" line), I think we should lose the "if we only had one" line.


8.) It's still curious how nothing Leo does really connects to HOW he finds the other Turtles and Splinter. He meditates, has visions of the others escaping from the lair, then says "Time to bring them home"... and just goes and gets them. How did he find them? Doesn't make much sense.
And the more I think about it, the more this whole meditation/vision thing makes no sense. Other than possibly our saving some money by using clips from a previous episode, what does it accomplish for Leo to see how the others escaped the destruction of the lair? It doesn't show him where they ended up. I wonder if it might make more sense to use that time to show him using some advanced ninja tracking techniques to find his brothers.

"*DONATELLO
(desperate)
You’re gonna have to go through me to get to him!"


10.) Although it works for pacing purposes, doesn't it seem a BIT too coincidental that just seconds after Leo finds Don and Splinter in their hiding place, the Foot appear? Why now? Why this particular place? Maybe the attck should take place as Leo is leading them back to the pump station.

"*EXT. UNDERNEATH BOARDWALK, CONEY ISLAND – DAY
An exhausted RAPHAEL sits in the sand propped up against a support beam  (A band-aid stuck to his chin).  He drinks soda out of a cup with a straw <EMPTY NOISE>."

A band aid? Where'd he get that?

"*LEONARDO
Hey Raph, don’t worry, just think of it like this…  Nothing is permanent.  Life is a constant state of change, and we’re all gonna be OK."

"LEONARDO
I’m going to go get some food, and some supplies and medicine.  I’ll be back.
Splinter smiles, knowing what is on Leonardo’s mind.  HE PULLS LEONARDO CLOSER FOR A QUICK WORD …
*SPLINTER
(close/to Leo)
Yes, I see.  Your journey home is not complete…  Be careful, son.  She has progressed in her training."

What exactly does Splinter hear in Leo's comment that makes him think that Leo is going after Karai? I don't see anything there. And if somehow Splinter DOES figure out that Leo is going into the lion's den to confront a deadly foe, why does he SMILE? What's there to SMILE about?

"Karai <FLINGS> one end of the weapon toward Leonardo.
Leonardo leans back as the chain enters FRAME <WRAPPING> around one of his swords and <YANKING> it out of FRAME. <SHCHING>
The sword flies across the library hitting the ground with a slide.
Karai <CROUCHES> and <SPINS> <FLINGING> the weapon once again toward Leonardo.
Horizontal BG Pan as a <CUT> moves across frame.
Leonardo <STAGGERS> back gripping his arm in pain.
LEONARDO
<GROAN OF PAIN>
Karai <LAUGHING> <WHIPS> the chain toward Leonardo.
The chain enters frame <YANKING> away Leonardo’s other sword."

It seems somewhat preposterous that this chain weapon is SO effective against BOTH of Leo's swords.

"KARAI (O.C)
<BATTLE CRY)
Karai <WHIPS> the chain <DOWN> toward Leonardo.
THE CHAIN COMES DOWN…
On the empty railing as the razor chain <CRASHES> down <CUTTING> and <TEARING> the railing to pieces."

"*Karai falls to the ground, beaten and weak.  She removes her Shredder helmet revealing just how frustrated and weak her face is."

So... she's weak? Seriously, has she not been doing her endurance training? It seems like she's going strong and then just gives up.

"*Leonardo <SWIPES> his sword.  (BG BLUR PAN)
A KATANA SLASH GOES ACROSS FRAME–
Leonardo <LANDS> <CROUCHING> in an open window frame.  He faces Karai.
CLOSER ON- Leonardo’s eyes narrow.
LEONARDO (FIRM)
Stay away from my family.
Leonardo <LEAPS> out the window and into the dark.
*ON- The statue of Oroku Saki.  With almost a flash a <CUT> appears at the neckline.  "

What's up with this "almost a flash" business? Seems dopey.

The way this is written, it appears that Karai was sitting right next to the statue, which seems kind of odd. Why not have the severed statue head it the ground and ROLL several feet toward her?