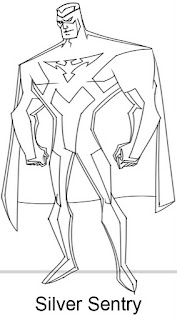 
Here are my comments on the Ep. 95 outline.

"CLOSE as a black boot splashes into a mudpuddle – a lone American soldier stumbles across the charred battlefield, dazed and disoriented.  Suddenly, a bright light shines down on the soldier from above.


From a bird’s eye view, we see the soldier is none other than BISHOP.  WIDE on the scene as Bishop begins to rise up into the light.  He screams helplessly, then we cut to BLACK.

Bishop's origin is slowly being revealed, and here we learn a little bit more about it (he was a soldier in the war of 1812, taken and experimented on by aliens). I think this is cool, but as I read this, I wondered if by adding a little bit we could make it even cooler and weirder. What I suggest is that when Bishop "screams helplessly", he also screams out something like "Nooo! Not again -- !!!" The implication would be that this was not the first time the aliens had come for him... and further it raises the question of just how old IS Bishop, anyway? He could be hundreds, maybe thousands of years old, for all we know! (Hey... I just thought of something else... if he WERE that old, he could have had something to do with Oroku Saki in feudal Japan. Would that be cool, or what?!)

" Stockman:  ‘Teams 2 and 3 have reported in… it’s just
incredible.  They’re made contact with dozens of creatures…
insects, fish, reptiles… the mutagen has spread…
Bishop:  ‘Doctor… is it containable?’"


A minor point -- I think we should try to find a word other than "mutagen" to call the stuff that is turning out all these mutant monsters, just because that is what we have always called the stuff that transformed the Turtles.

"Raph leaps into the fray, knocking the head roach back with a kick.  He helps Don up, but in a blur, the head roach strikes out, an alien clawed limb scratching out at Don…


With a yell, Don spins around, a deep set of gouges on his leg.  He drops to the ground."

I think it might be better if instead of a wound which is CLEARLY serious to begin with, Don gets LIGHTLY scratched -- not much more than what you might get if your cat clawed your arm with one claw -- so that it makes more sense that he would laugh it off at first and not be too concerned about it.

FYI, we’re planning to pretty seriously re-vamp the premise we sent out for the Justice Force/Bring on the Bad Guys episode.  It’s not working out with trying to use past Turtle villains (Mephos, GarbageMan), so we’re thinking of making up a new super villain team (with Malignus still at the helm) that has reason to want to destroy the Justice Force.

Be that as it may, any ideas you have for a big, fun, super-hero super-episode are more than welcome!


Timing, as they say, is everything. I read this email from you exactly two minutes after I had completed writing up my comments on that premise! Although they might now be useless, I will send them to you anyway (in this email) just in case there is something in them that might be helpful.

"Calling cards are sent out … little robotic bugs (from “Turtle Titan”) pay visits on Mephos (helping him break out of his prison cell as the little bug self-destructs blowing a big hole in the wall), the Garbage Man (in his decrepit new hideout half underwater in a sunken/rundown pier), and various super villains (referenced in “Return of the Justice Force”): Grim Repo, Red Menace, Gas Giant, Mr. Destructo, Super Synthesizer and the Living Volcano."

I hope we can make these super villains -- who have only been referenced by name previously -- interesting and cool-looking.
Also, I wondered if it might be fun to do a quick shot of one of these bugs finding Karai (perhaps in her Shredder armor), and she dispatches it quickly with a blade or something, with some kind of pithy line about how she doesn't need allies.
And I just realized that getting Mephos into this story might be a bit problematic -- isn't he being held prisoner in the secret, invisible Avian cloud city? How does Dr. Malignus' bug find and reach him there? I suppose a rationale could be created, but it's tough. I did just flash on an idea which might help to connect Mephos and Malignus -- what if Malignus (with his obvious techno-savvy) had helped Mephos create his crazy metal wings? Okay, now I just thought of another problem -- if Mephos IS on the cloud city when the bug arrives to free him, and he doesn't have any wings, how is he going to get to Earth?

"Widen still to reveal that Doctor Malignus is in a prison cell safely behind bars.  He looks up with a smile.  “Guard!  Guard!”  The guard approaches.  “Guard, I think it is time you released me back into society.  I have important work to do.”


The guard (a bit zombie-like) bows: “Yes.”  And, the guard then unlocks the heavy prison door allowing Malignus to exit.


Upon closer inspection, we see one of the mind control bugs firmly implanted in the back of the prison guard’s neck …"

I wonder if this bit might be more interesting if the guard is not immediately under Malignus' control, but instead begins to respond to Malignus' command to be released with a derisive laugh and a dismissive comment... but then halfway through it the guard stiffens and does the zombie thing... and THAT'S when we see that there is now a mind-control bug on him. Maybe there could even be a quick shot of something (the bug) skittering up his pants leg.

"Raphael wakes up in the middle of a street.  This isn’t an ordinary street.  It’s a condemned block.  And, Raphael isn’t greeted by anybody ordinary.  He finds himself facing Malignus and the horde of super villains.  Malignus is ever so happy to see “the Turtle Titan” again.


Raphael ain’t no turtle titan.  But, Malignus can’t seem to understand that.  He thinks the Turtle Titan is just attempting to be clever.  But, that isn’t going to work.  The Turtle Titan’s fate is sealed.


But, nobody is listening.  Malignus puts his plan into play!


The six (new) super villains make themselves scarce (as part of the plan) and Malignus, GarbageMan and Mephos start to attack Raphael … all of which is being filmed and broadcast for the benefit of the Justice Force.


At the Justice Force Headquarters, the image of Raphael getting the ever-living-crud kicked out of him plays on the viz-screen.


They arrive on the scene and Malignus feigns surprise. But, his mind control bugs will soon make short work of the Justice Force."

This whole "abandoned block" set up feels kind of goofy. I think there should be a better way of getting the Justice Force into Malignus' trap. (And the JF should KNOW that it's a trap -- I mean, with the broadcast and all it's pretty obvious.) I wonder if it might make more sense, and be cooler (especially because Raph is initially at Malignus' mercy) if Malignus is mind-controlling Raph and thus uses him to get the JF's attention.
Actually, now that I think about it, why does Malignus' mind-controlling bug inject Raph with a "sleeping drug" instead of just mind-controlling him? Doesn't seem to make much sense.
I don't think we've seen a Turtle under the influence of one of Malignus' bugs yet -- might be interesting. Actually, maybe Raph -- while mind-controlled -- could use a shell cel to summon the JF, and thus lead them into the trap. (And when Ananda sets off the EMP device, he is released from the mind control.)

"Raphael retrieves several of the mind control bugs (that were deactivated earlier) and uses them like shuriken, sticking them to the GarbageMan and one of Mephos’ wings.  Then, Raphael attacks Malignus long enough to get his hands on the control device."

Would it make more sense that Raph grabs the control device BEFORE he throws the bugs at Garbageman and Mephos? Also, why should the bug go on one of Mephos' wings? Every time we've seen them so far, they have to be on the back of someone's neck to do their mind-control thing.

From what we have seen of the Silver Sentry so far, I doubt he'd be held down for long by "the GarbageMan’s launched gear (netting and spikes)".

" And, GarbageMan stops Living Lava while Mephos frees Silver Sentry and pulls him into the air."

I can't wait to find out how the heck Garbageman is supposed to stop Living Lava.

"Just then, the other three turtles show up (Mikey is dressed in his Turtle Titan outfit).  They picked up the show of Raphael getting beaten up earlier on one of their scanners but it took them longer to find the place than it took the super heroes.  It looks like they’re a little late."

As I think we should ditch the 'Raphael fight show" bit, another way to get the Turtles into this is in order. Or... do we really need this scene? Maybe Raph could just find his way back to the lair and say the same lines to Mikey about comic book heroes.