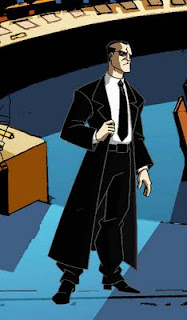 Mar. 30, 2004: Re: TMNT - 76 premise
From: Peter Laird
To: Lloyd Goldfine
Lloyd,
Groan.
Here are my notes on the Ep. 76 premise.
1.) To start off with, I absolutely f...ing hate this one. I'm not even sure if I should waste my time commenting on it... but I suppose I should. I'll try to only hit the high points (or is that "low points"?).
2.) Re: the following:
"We open at the turtles’ lair, deep underground, where all are abed and sleeping.  All seems calm and peaceful until … <boom>, there’s a huge explosion as part of the wall explodes inward.
Laser sights beam around the room as a squad of Bishop’s commandos enter and secure the center room through much fire and explosions.  "
I have said many times that the only way I will accept the discovery and invasion of the Turtles' lair as a part of a story is if that story is GREAT and there is a GREAT reason for the reveal of the Turtles' secret home. This story doesn't even come close.
3.) Re: the following:
"The turtles rise to the challenge to face him, but Bishop isn’t interested in them.  "Amphibian DNA is useful, but … it’s not even close to human."  He’s come for different quarry today.
Bishop:  "Family Muridae, genus Rattus."  He smiles at Splinter, "Namely, you!""
For (hopefully) the last time...
... TURTLES ARE NOT AMPHIBIANS!!! THEY ARE REPTILES!
REPTILES!!
REPTILES!!!
Jesus freakin' Christ...
4.) Re: the following:
"Well, the boys aren’t going to let them take Master Splinter without a fight (nor is Master Splinter going to go without a fight).  So, there’s a fight.
Unfortunately, Bishop really lets himself go on the turtles and beats the crud out of them."
Great to know that all Bishop had to do was "let himself go" and he could -- single-handedly -- "beat the crud" out of all four Turtles. At the same time. Together. I sure hope he remembers to do that later in the episode when they fight again.
5.) Re: the following:
"Bishop scoffs at the groaning turtles.  He’s not even going to bother to finish them off he thinks so little of them.  "
Could this BE any sillier? At the very LEAST he would kill them to keep them from coming after him... after all, he SHOULD have learned from their previous encounters that they are resilient and resourceful. But no, for the sake of a RIDICULOUS "macho pose" moment, we'll have Bishop act like a COMPLETE FOOL.
6.) Re: the following:
"Bishop also has something else he’s working on.  An ergonomic portable gene therapy processor that one can wear (think Bane and his "juice") as a backpack or shoulder pack.
With this, Bishop can control, regulate his own genetic enhancements on the spot … for whatever is called for: i.e. extra strength, silence/stealth, seeing in the dark."
"An ergonomic portable gene therapy processor"... the mind boggles. So basically this is Bishop's own Fred Wolf-style "mutagen" -- something he can carry around with him and squirt onto himself so he can have new powers according to what the script demands? It's almost like that old comic book "Dial H For Hero"! (Or would that be "Dial V For Villain"?) Truly, the mind boggles. (Not to mention that if he already has something that has this incredible power, what the bleeding HELL does he need Splinter for???!!!)
7.) Re: the following:
"Meanwhile, the turtles, LeatherHead and Honeycutt are barreling down the subway tunnels on target and soon …
The turtles, LeatherHead and Honeycutt burst (literally) into Bishop’s base where they’re holding Splinter.
Bishop is surprised to see them.  And, he’s even more surprised to see his train car. "
And he's not the only one! What an amazing subway car this is -- somehow able to maneuver all over the place, switching tracks, etc. Incredible!
And the Turtles and Leatherhead smashing Bishop's subway car through the wall of his secret base lab -- brilliant! Why use stealth? Or intelligence? Or strategy? Let's just slam into a wall and hope we don't DIE so we can MAYBE find Bishop and fight him? (And hope he doesn't remember to "let himself go"!)
8.) Re: the following:
"The turtles face Bishop.  He uses his new portable gene therapy device and really starts to kick their butts … "
Can anyone read that second line and not break out laughing?
9.) Re: the following:
"… and the turtles save Master Splinter.  They carry him to the train car and roll out of there just as the whole place overloads and explodes."
Hmmm... was that the same train car that was SMASHED into/through the wall of Bishop's secret HQ? Durable sucker, that.
10.) My advice on this premise? Burn every copy.
-- Pete
Posted by PL at 11:06 AM