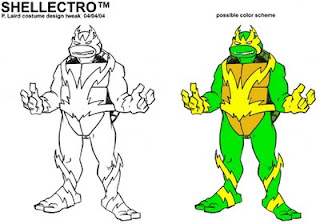 (Note: The following email is one I wrote to Lloyd after he responded to my less-than-kind, shall we say, comments about the premise for episode 76 of the 4Kids TMNT show. Lloyd gently took me to task for my comparison of that premise to some of the more objectionable stuff from the first TMNT animated series. He didn't necessarily disagree with me, for the most part, but felt that I could have toned down my vitriol out of regard for the people at 4kids who were all working hard to make the deadlines required to keep the series on the air.


While I felt then -- and still feel now -- completely justified in the comments I'd made, and you can see some of that reflected in my explanation in this email about WHY I expressed myself in this fashion, I did take Lloyd's comments to heart and from that point on I gave some more thought to how I expressed my displeasure with things that aggravated me. I didn't refrain from pointing out when something seemed bad, but I did it in a slightly more thoughtful way.

I tried calling you several times today but your mobile kept informing me that you were not available.>>


That's because I was at the movies seeing HELLBOY, and I had turned off my cellphone and only remembered to turn it back on around 6PM. Sorry! I was kind of expecting you to call back after 4 yesterday, but maybe you got caught up in other stuff.

<< Here are a few issues I wanted to talk to you about:


Re: the fluxing, Mike Ryan reminds me that when we get to the Leo/Usagi in the Battle Nexus episode, they will try several times (three, actually) to bring Raph, Don and Mikey back from their multi-dimensional banishment, and that this will tie in with the three flux/phasing incidents built in to each script.  As per our last conversation you said you weren’t loving it but would go with it if we really thought it was necessary.  Clearly we think it’s more necessary than YOU do ;) , and I’d like to keep it for a number of reasons (that you won’t buy no matter what I say!)… so that’s the plan unless you want to exercise your power of executive veto.  >>

It's funny that you should put forth that explanation -- that they try three times -- because I ALMOST made that same suggestion in my email today about that draft as perhaps the ONE possible way I would buy the whole "phasing" thing. But I didn't, mostly because (a) I didn't want to encourage an idea I was not crazy about, and (b) as much as I wracked my brain I could not remember ever discussing the idea that they would be making these multiple attempts. (Of course, maybe if I go back and read all of the outlines and premises, it's in there... but I honestly don't recall it.) I do want to go on record, though -- even if I accept this new explanation -- as still thinking that the whole "phasing" thing is not a great idea for these stories.

<< Re: the premise for episode 76, I think you and I should come up with a story.  You and I discussed the character of Bishop and a broad story arc for him, and I think we should pay that off.  We’ve already set Bishop up as a character who is involved in a genetic engineering SuperSoldier project.  He knows all about the Turtles and Shredder, and knows about the special mutagen that transformed them through DNA samples he’s taken from the Turtles and LeatherHead.  We’ve also made him a super bad-ass, the ultimate black ops intelligence agent, and he has already held his own in battle against all four turtles, Karai and Hun - - all at the same time.  I think he’s a pretty intriguing and formidable character, and I think doing a big, final showdown between Bishop and our heroes can make for a strong episode.  I put forth my usual argument that it’s ALL IN THE WAY WE HANDLE the elements of this story.  While I definitely do not want to defend the premise as (poorly) written, and while I agree with most of your notes, I think your absolute f…ing hatred of it and your invocation (AGAIN!) of Fred Wolf in the face of how we’ve handled this show thus far is pretty unfair and only serves to bring everyone down (which is particularly hard to swallow when everyone is killing themselves for this series).  At any rate, since I can see that this one will be an uphill battle no matter what, I think you and I should hammer out an acceptable Bishop story together first thing next week.  Deal?>>

I'm up for that. I should say -- and it will come as no surprise to you, I am sure -- that I've never been wild about the Bishop character... he has never seemed to me to be very well-defined. But that's me -- maybe you have a much clearer idea of who he is and how he should be used.
You know, it may not seem like it when I blast a submitted premise or outline or script or design with harsh criticism, but I actually DO choose my words very carefully. I swore when I first started work on this new show that I would not put up with what I perceived as crap, as much for my own mental health as for the level of quality of the show. I appreciate GREATLY -- probably more than you or anyone else at 4Kids (maybe nobody but my wife and Gary) can know -- that the majority of material that I have been sent from 4Kids concerning this show has been good to excellent, and that the horror show days of working with (or perhaps I should say "sweating blood trying to work with and being arrogantly and condescendingly rebuffed at every turn") Fred Wolf and his crew are OVER. The amount of poor to crap stuff re: the new show has been AMAZINGLY small, especially given the tight timeframe we are working in. Maybe I don't say it enough, or at all, but I truly do appreciate that.
However, I think I could make a persuasive argument that one of the reasons that I DON'T get sent a lot of crap is that I have demonstrated from day one that I will not ACCEPT what I see as crap. I wouldn't accept Chuck Patton wanting to put points on the backs of the Turtles' heads, and I wouldn't accept some writer's idea to have a Turtle get his shell pushed in and then stick his thumb in his mouth and blow on it and thus expand his shell again, and so on. I credit you greatly with seeing that very quickly and probably doing a lot more filtering of material before it gets sent to me than I am aware of. I also credit you with a lot of good ideas and an excellent "feel" for the Turtles which was good to begin with and gets better as we go along.
I think if you were to look back through my comments over the last couple of years, I actually use the "Fred Wolf" imprecation quite sparingly. And I really only do it when something strikes me as REALLY uncharacteristically (for 4Kids) lazy, stupid, and hackneyed (all typical hallmarks of the Fred Wolf product). I think it's telling that nearly always YOU pick up on the same things as I do (although you don't react as viscerally to them, for the most part). Over the last couple of years, I think I've proven to you that while I have strong ideas and opinions about how things should be done (ESPECIALLY about these characters I have spent the last twenty years of my life thinking about and taking care of), I am not resistant to a good idea which does not come from my brain. If you can explain it to me clearly and show me WHY and HOW it's a good idea, nearly always I will agree. I'm not sitting up here with a gigantic swelled head thinking every little thing that I think of is the be-all and end-all of creativity.

<< Re: the Super Turtles, I feel that despite the original designs from the comic, it’s pretty important to make Griddex, Shellectro, Blobbiod and Graviturtle more superhero looking and less like our everyday turtles, especially when we have our regular turtle running around with them.  I also don’t think they should be wearing ninja-style masks.  I’m happy to make changes, but please keep this in mind.  Maybe you wanna do a few sketches?>>

I may in fact do some sketches, but my point about keeping the "Turtley" nature of the characters visible and clear remains the same. I think if you look at the original design of Graviturtle, there really is no way you could confuse him with Mike or any of the other "regular" Turtles -- and he has a superhero outfit which only consists of gloves, boots, cape, cowl and belt. I really think that's pushing it as far as I want to go in terms of covering up the Turtles with superhero garb. I acknowledge that maybe Blobboid and Shellectro could possibly use something more (especially Blobboid) and if I do any sketches it will likely be of those two. I'm not sure what you mean by "ninja-style masks", exactly... do you mean masks which look like those our regular Turtles wear? If so, I believe only Shellectro has anything like that. Graviturtle's is an over-the head Batman-style multicolored cowl, and Griddex and Blobboid don't even have masks (not sure they need them, really).