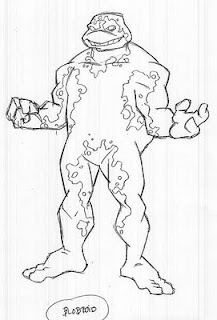 Mar. 9, 2004: Ep. 71 premise/outline comments
From: Peter Laird
To: Lloyd Goldfine
Lloyd,
Here are my notes on EP. 71 premise/outline "Reality Check":
1.) Re: the following:
"Michelangelo (v.o.):  "You’re not going to believe this.  I hardly believe it myself.  But, I’m in a world of superheroes.  Don’t ask how I got here.  I’m not sure I even know."
Maybe I'm taking this too literally and wrongly, but we're not saying here that EVERYBODY in this world Mikey finds himself in is a superbeing, right? Just that this is world with superheroes, perhaps more of them than the Turtles' world.
2.) Re: the following:
"And, the mailman shows up.  It’s the Silver Sentry!  "Hey, aren’t you the Silver Sentry!?"  "Nope, I’m just the mailman."
Does this mean that this mailman is just a big, muscular guy in a mailman's uniform who LOOKS, facially, like the Silver Sentry? I mean, he doesn't FLY to the mailbox, does he?
3.) Re: the following:
"Just then, a helicopter lands and is lowered into the facility and Hun and the Shredder step out!
Michelangelo REACTS in shock and ready to fight as we go to …
ACT THREE:
Mikey (now Turtle Titan) is ready to fight Hun and the Shredder but …
… the other super turtles just laugh.  "You don’t want to attack the Mayor of this fair city, do you?""
I like this twist, but I have a question -- is this Oroku Saki in his business suit, or the Shredder in full Shredder armor? It would seem to make a little more sense if he was NOT wearing the Shredder armor. Maybe Mayor Saki and Police Commissioner Hun should have a bodyguard made up of guys who look MOSTLY like Foot ninja, but on closer examination we see some police or SWAT-related insignia.
And maybe instead of saying "this fair city" the super Turtles should say "OUR fair city" (just like Click and Clack say about Cambridge, MA on their "Car Talk" radio show).
4.) Re: the following:
"They’re take the Turtle Mobile (a super hero vehicle with multiple bubble domed seats).  "This is soo great."
I can't believe I'm about to say this, after last year shooting down Playmates' request to reuse the old Turtle Blimp toy from the first line of toys, but it occurred to me that it might be fun to have these Super Turtles use some kind of blimp (MAYBE patterned on the old Playmates blimp toy, but updated some to be cooler), with the rationale that (a) the Super Turtles like it because it's ecologically sound -- doesn't pollute, (b) it's quiet (for stealth), and the skin of the blimp could be made of some kind of "display fabric" which can play various designs to make it look like any kind of blimp, so it can hide its true nature from prying eyes, and (c) it's good for missions that don't require really fast speeds, but the glider thing can detach and zip around if necessary. Just a thought.
5.) Re: the following:
"But, of course, it’s a trick.  Mikey/Turtle Titan starts to morph and change and reveals himself to be Blobboid in Mikey’s Turtle Titan costume!  He attacks before Sliver can react (or access the turtle "kryptonite").  (They pulled the old switcheroo!)"
Logic problem here: If Sliver took "away their super powers (through some form of turtle "kryptonite")" earlier, how can Blobboid use HIS superpower to imitate Mike?
6.) After ruminating on this premise/outline for a few hours, and though I kind of like the "shock value" of making Splinter evil, I have a concern about the use of some of the classic "mirror universe" concepts (which any fan of "Star Trek" will recognize), specifically the idea that in this "Super Turtle Universe" characters who are bad will be good (i.e. Saki and Hun) and vice versa (i.e. Splinter). First, it's not quite what I had in mind when I created those Super Turtles in issue #7 of the Vol. 4 TMNT comic. And second, it's not consistent -- why is Splinter evil and not the Turtles? Thirdly, if we are going to use the Super Turtles as I created them in that issue, I'd also like to keep the bad guys I created, and specifically I have in mind Dr. Shreddarius (that universe's sort-of version of the Shredder).
With that in mind, I would suggest this for consideration: Make April the Mayor, and Casey the Police Commissioner. (Or make Silver Sentry the Mayor,  April the Police Commissioner, and Casey a SWAT captain.) Make Saki/Shredder into Dr. Shreddarius, and make Hun into one of his minions -- I'm thinking the big guy who shoots rockets and stuff and whose name escapes me at the moment. And make the Splinter twist be that  Dr. Shreddarius has captured him and turned him into K'Nign (the dog/wolf looking robot), but in a way which would allow our Turtles (Super and non-Super) to rescue him, i.e. K'Nign (pronounced like "canine", but you probably got that already) is actually a robot shell within which Splinter is encased, and he is being forced by it, against his will, to fight his sons.
I am, of course, open to discussion about these issues.
-- Pete
Posted by PL at 6:47 AM