On the next three pages of the Kay-Bee sketchbook, I made a bunch of notes about the story Kevin and I were working on for issue #11 of the TMNT Volume One comics. This is the follow-up to issue #10, wherein the Shredder came back from the dead, and he and the Foot invaded April's apartment building, which caught fire during their pitched battle. Casey Jones had appeared at a crucial point in the struggle, fighting on the Turtles' side and helping them, April and Splinter to escape the city.

Again, I''ve transcribed the notes to make them easier to read. 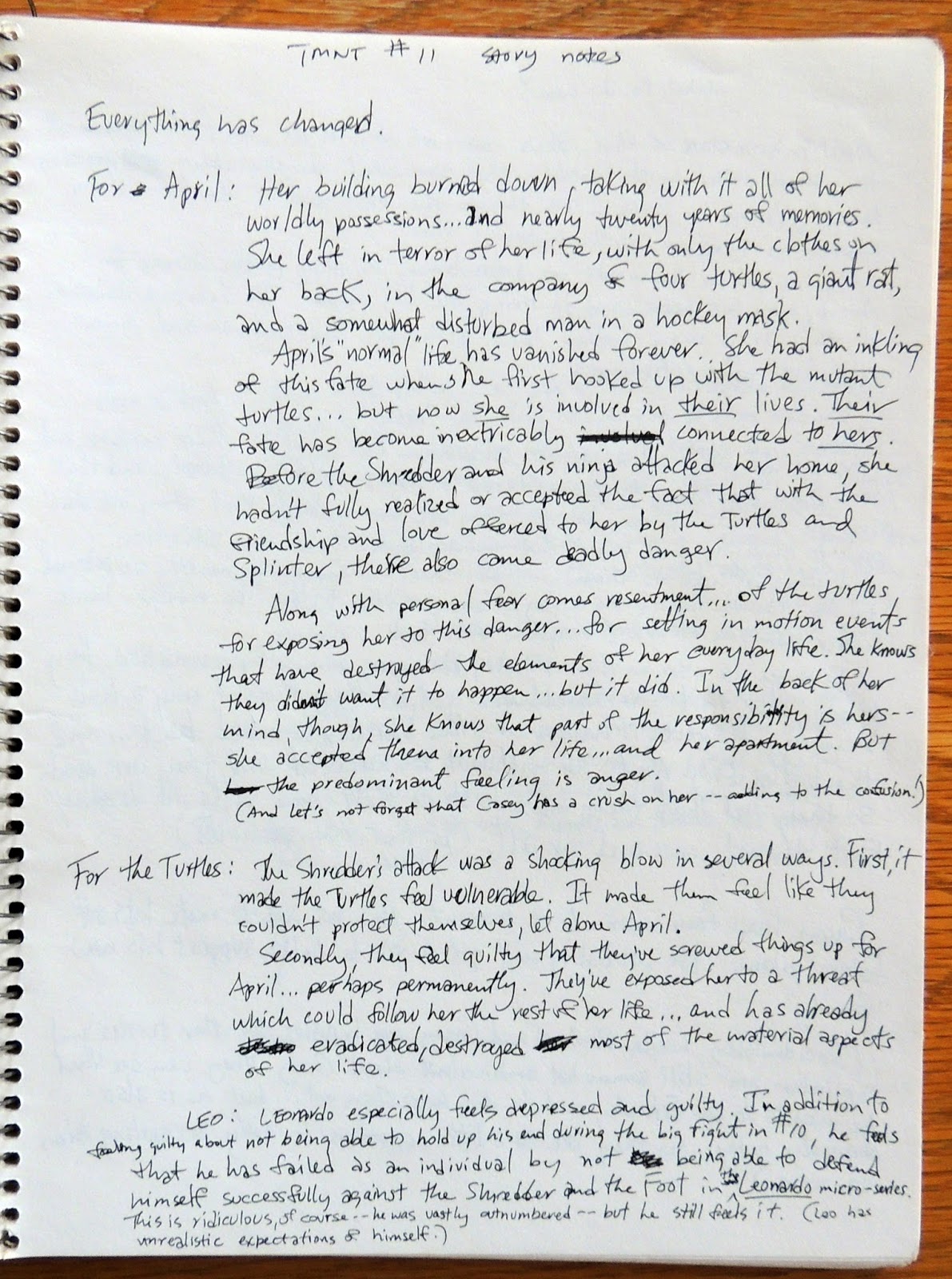 For April: Her building burned down, taking with it all of her worldly possessions… and nearly twenty years of memories. She left in terror of her life, with only the clothes on her back, in the company of four Turtles, a giant rat, and a somewhat disturbed man in a hockey mask.

April's "normal" life has vanished forever. She had an inkling of this fate when she first hooked up with the Mutant Turtles… but now she is involved int heir lives. Their fate has become inextricably connected to hers. Before the Shredder and his ninja attacked her home, she hadn't fully realized or accepted the fact that with the friendship and love offered to her by the Turtles and Splinter, there also came deadly danger.

Along with personal fear comes resentment… of the Turtles for exposing her to this danger… for setting in motion events that have destroyed the elements of her everyday life. She knows they didn't want it to happen… but it did. IN the back of her mind, though, she knows that part of the responsibility is hers -- she accepted them into her life… and her apartment. But the predominant feeling is anger.

(And let's not forget that Casey has a crush on her -- adding to the confusion!)

For the Turtles: The Shredder's attack was a shocking blow in several ways. First, it made the Turtles feel vulnerable. It made them feel like they couldn't protect themselves, let alone April. Secondly, they feel guilty that they've screwed things up for April… perhaps permanently. They've exposed her to a threat which could follow her for the rest of her life… and has already eradicated, destroyed most of the material aspects of her life.

Leo: Leonardo especially feels depressed and guilty. In addition to feeling guilty about not being able to hold up his end during the big fight in #10,  he feels that he has failed as an individual by not being able to defend himself successfully against the Shredder and the Foot in the Leonardo micro-series. This is ridiculous, of course -- he was vastly outnumbered -- but he still feels it. (Leo has unrealistic expectations of himself.)" 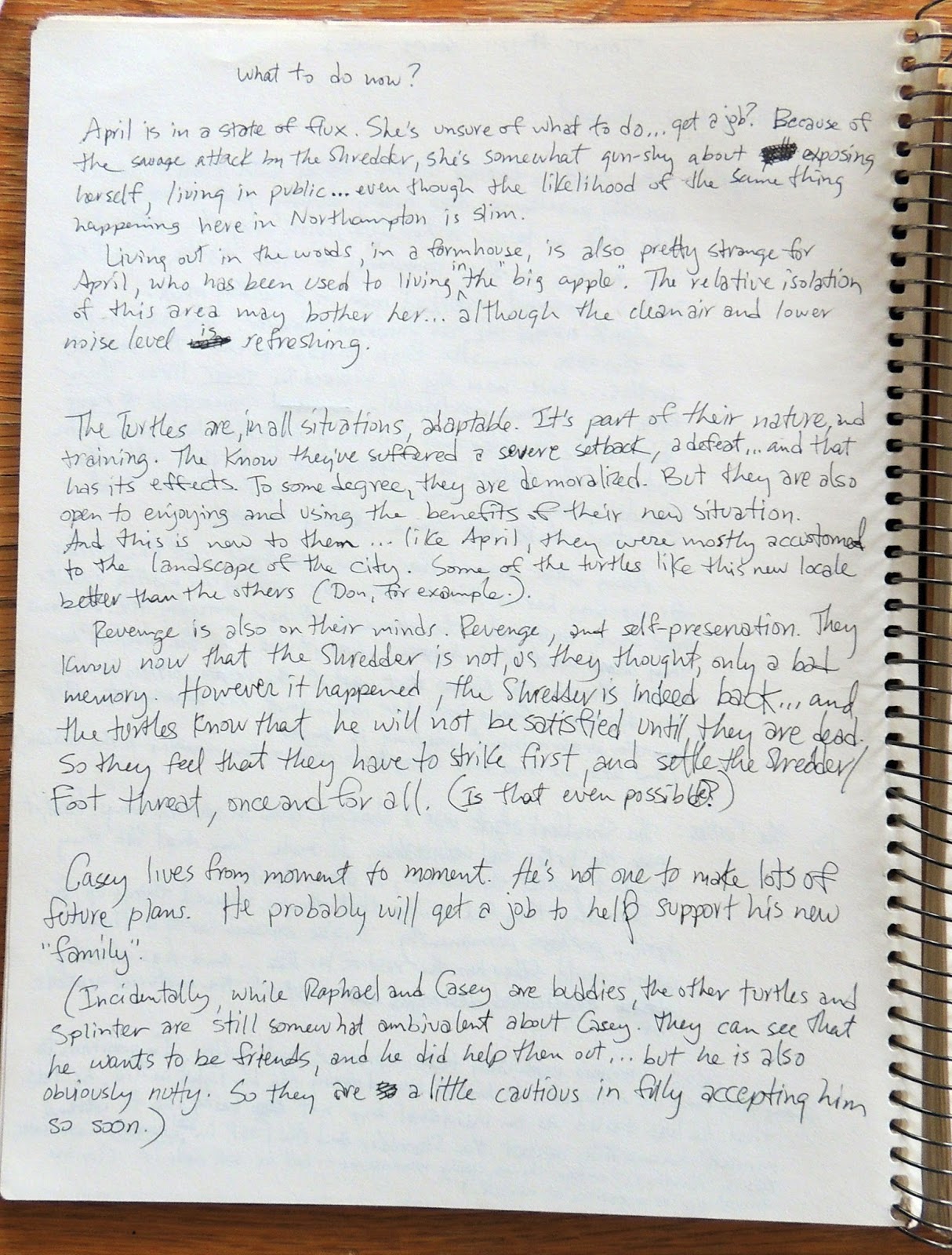 April is in a state of flux. She's unsure of what to do… get a job? Because of the savage attack of the Shredder, she's somewhat gun-shy about exposing herself, living in public… even though the likelihood of the same thing happening here in Northampton  is slim.

Living out in the woods, in a farmhouse, is also pretty strange for April, who has been used to living in the "Big Apple". The relative isolation of this area may bother her… although the clean air and lower noise level is refreshing.

The Turtles are, in all situations, adaptable. It's part of their nature and training. They know they've suffered a severe setback, a defeat… and that has its effects. To some degree, they are demoralized. But they are also open to enjoying and using the benefits of their new situation. And this is new to them… like April, they were mostly accustomed to the landscape of the city. Some of the Turtles like this locale better than the others (Don, for example).

Revenge is also on their minds. Revenge, and self-preservation. They know now that the Shredder is not, as they thought, only a bad memory. However it happened, the Shredder is indeed back… and the Turtles know that he will not be satisfied until they are dead. So they feel that the have to strike first, and settle the Shredder/Foot threat, once an for all. (Is that even possible?)

Casey lives from moment to moment. He's not one to make lots of future plans. He probably will get a job to help support his new "family".

(Incidentally, while Raphael and Casey are buddies, the other Turtles and Splinter are still somewhat ambivalent about Casey. They cab see that he wants to be friends, and he did help them out… but he is also obviously nutty. So they are a little cautious in fully accepting him so soon."

"For Casey: This whole thing is an adventure… incredibly exciting. Maybe he doesn't yet fully realize the position he's put himself in by helping the Turtles against the Shredder and his organization… maybe he still sees it in the kind of fantasy way that he views his own goofy vigilanteism.

This whole new adventure is also a welcome change from Casey's current lifestyle. As uneducated as he is, even Casey understands in some way that his life is going nowhere… and this change seems to be a way of giving his life some real purpose.

Casey has also been developing a serious crush on April. Since he had started spying on them (back in issue #4), he's been sweet on her. Unfortunately, Casey lacks the kinds of social skills that would allow him to approach her easily… and so will bumble and fumble his way into her heart."


I was surprised when I read that last page, and saw these lines:

"Casey has also been developing a serious crush on April. Since he had started spying on them (back in issue #4), he's been sweet on her."

I have been asked several times in the last decade by TMNT fans about the identity of the cigarette-smoking person with a telescope pointed at April's apartment, seen in a single panel in issue #4 of TMNT Volume One, and never referenced again. Here's the page from issue #4:

... and here is the panel, cropped for easier viewing:

I have to say that I never had a conclusive answer to the question, because it had been so long that I'd forgotten what our intentions were! I seem to remember suggesting at one point that it might have been some agent of the Foot Clan. But if these notes, very likely written in 1987, and thus much closer in time (and memory) to our work on issue #4, are accurate, we'd originally intended that mysterious person to be none other than Casey Jones.

That revelation brings up another series of questions, primary among them is this -- was Casey a creepy stalker-type guy? I suppose it's not too startling to imagine him being that way, at least in part, but I do wonder why we never touched on this in later issues. It's good to finally know who that mysterious person was. -- PL
Posted by PL at 7:42 AM