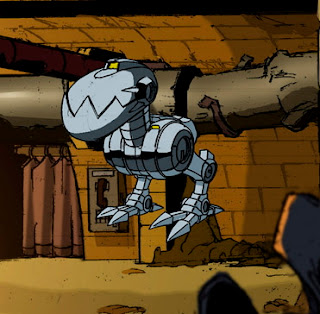 After Splinter takes out the four attacking Mousers on his own (episode 1),
would it be out of character for him to smile and say to himself, “Heh. This
old rat’s still got it!” or simply “I still got it!”  Funny/nice character
beat for him, or nah?

If Splinter said something like that, I think he might say "I still have it" (he does speak more  properly grammatically than Raph, for example). However, I can't say that kind of humor for Splinter is totally to my taste. Actually, a scene like that might be a perfect opportunity to "be inspired by" the moment in  the new STAR WARS movie where Yoda, after flipping around in mid air and fighting this intense Force/lightsaber battle with Count Dooku, he picks up his little staff/cane and hobbles away, re-establishing the (what we know now is) the illusion that he is a frail old creature. I could see Splinter doing something like that  -- dusting himself off, then hobbling away on his staff.

Just looking for your reaction to Gary's notes, and Don's
"grappling-hook-in-bo-staff" idea in particular.

Lemme know as soon as possible.

I'll make comments as appropriate below.

Hi Lloyd,  After holding off for most of the day in hopes of hearing the
thoughts of Playmates on the 2nd outline, I wanted to get you my comments by
4 PM as promised, so here goes.

It seemed to me that the Mouser that the Turtles initially follow does an
awful lot of indiscriminate gnawing and destruction as it makes its way back
to Stockman's lab.  Do you feel this destructive pattern is necessary and
logical?  Can't it find its way home without gnawing through everything in
its path?>>

I think we discussed this or something like this last week in a phone call.  It doesn't bother me much that the Mouser behaves in this fashion at this point in time -- after all, it's one which has been broken and then repaired by Don and so might be a little flaky -- but maybe something should be said to indicate that.

<<Next it seems kind of convenient that Don has brought along a grapple hook,
but I see the need in this episode and future episodes for Don to have a
number of gadgets at the ready.  Therefore, I wonder whether Don should
frequently travel with a bag of technological goodies or maybe his bo staff
should be a hi-tech device in its own right.  For example, maybe the bo
staff could fire a grapple type device in this episode.  If this appeals to
you and the writers it would be a concept that Pete should approve before
putting it into practice.>>

Actually, this brings up another good question -- what, besides their "signature" weapons, do the turtles carry on their persons? In the first issue of the original comic, for example, we show the turtles using their "climbing claws" -- well, where did those come from? I guess I always assumed that they had some little things tucked away inside their belts, like climbing claws, shuriken, et. Possibly there would be room for a collapsible grapping hook and cord inside a belt. Or perhaps we should consider giving the turtles some kind of small pouch which could attach to their belts that could hold such small items.

In the past I've toyed with the idea of making Don's staff be more "multi-functional", and don't have a HUGE problem with having a built-in grapple-firing device... but it might be better (more realistic?) to have the turtles carry such tools with them instead of building them into their weapons.

<<On page 2, when the water main breaks, I was left kind of wondering whether
the water just keeps flowing fast and furious, as it probably should, given
that it is described as a "serious water main", or if the water flow somehow
stops?  If the later, how and why does it stop?>>

Good point. What does happen in "real life" when a main breaks? Can't the Water Dept. shut off the main after the break is detected -- and can't breaks be detected by instruments which record sudden radical changes in water pressure?

<<On page 3, the description of Raph, and then presumably the rest of the
guys, "leaping, dodging, flipping" to avoid subway cars seems a bit over the
top.  Maybe we could bring the action down to earth a bit.>>

Not sure why this one didn't faze me when I read it, but Gary makes a good point about the "over the top" nature of this action. When I try to picture it in my head, I really can't.

<<Also on page 3, I did not understand why the Mouser is unfazed by April
smashing it with a fire extinguisher.  Is April that weak compared to, say,
Splinter, who can readily dispatch a Mouser with a walking stick?>>

Another good point, and similar to what we've discussed before about keeping the power and durability of the Mousers consistent from scene to scene. As Gary suggested to me, maybe April DOES smash one Mouser with a lucky blow from the fire extinguisher, but there are a lot more behind that one and maybe one of those chomps down on the fire extinghuisher and punctures it, releasing a huge cloud of carbon dioxide (or whatever's in those things), which April thinks is a good thing because it will cover her tracks as she makes her escape (she's wrong, or course). Just thinking about it now, it could be a cool visual to see the Mousers emerging out of this fog as they take off after April.

<<Next, at the very end, I'm not sure why Raph has to act like a total
out-of-control madman and not allow Don to collect one functioning or
semi-functioning Mouser.  I think it might be better to either allow Don to
capture one or give Raph a legitimate reason for smashing every last one of
the Mousers to pieces.>>

I think Raph is acting in character here, and think it should be changed only if the following episode(s) require that Don have a Mouser to take home with him to examine or whatever.

<<Finally, the very last line of dialog "So?  Can I keep her?" is very close
to a line from the first movie.  Therefore, I think we may want to stay away
from plagiarism whenever possible.  Plus the line makes Mike seem like kind
of a sex starved pervert to me.  In the movie they at least knew who April
was from watching her on TV.>>

I didn't at all get the "sex starved pervert" implication, and the plagiarism thing is questionable (who actually came up with that line?), but when you stop and think about it, it made a lot more sense in the movie in the context of the scene as opposed to here in the context of this scene. I could live with losing it and coming up with a new funny line ("Is it my breath?" or something).