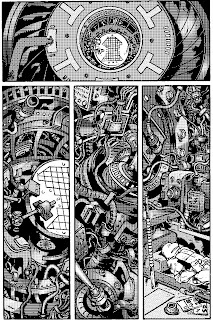 Yesterday a box arrived on my desk from Mirage, and in it, much to my happy  surprise, I found the NEW ISSUE of TMNT!!!

WOOOO – HOOO!  And also let me throw in a HALLELELUJAH (for good measure)!

What a great way to start the week!  I just finished reading it and wanted to let you know I enjoyed it thoroughly.  I also realize that I have MISSED IT IMMENSELY!

A question: was this written before you put the series on hold, after, or a little of both?  Just curious.>>


Your enthusiastic words are MUCH appreciated... thank you! As for when I wrote it... I think I actually wrote the dialogue about a year and a half after Jim had drawn the book, so I guess that would mean about six or seven months ago. Now I'm curious -- why are YOU curious?

I had originally planned to make that "alien bathroom" scene longer and goofier, with Casey -- in his inebriated state -- trying to figure out how to use some crazy looking alien toilet, and maybe even interacting in some embarrassing way with some alien in the bathroom... but it ended up working better as is, I think. I like the sense of melancholy Jim achieved in how he drew Casey taking a leak while thinking about April.

You know, I get a big kick out of that. I know I've said this before, but it probably bears repeating -- I'm really proud of being part of the team that did (is doing!) the new TMNT tv show. And it really is fun to have that kind of backwards integration (is that the right term?) of stuff from the new show into the comic. (Something that would NEVER have happened in the old Fred Wolf days!)

I agree! If you can, please find a moment to tell those guys that too -- they'd appreciate it!

I'll be happy to see you any time, Lloyd! (Although I am obligated to be at the NECA booth signing toy packages from 1 to 3 on Saturday, I believe.)

Oh, and by the way, I also meant to mention two additional things about the comic:


Thanks! So far, it is going pretty well -- I think Katie told me today that since the ordering info went up on the website Monday or Tuesday, we've gotten about 250 orders. I am still hearing (or reading online, actually) comments from befuddled Turtle fans who don't quite get what I'm doing with it, but I'm hoping that will pass. And so far I've done head sketches in 225 copies... I might do more, but I think that is enough for now.

You (and the crew) are welcome! I'm looking forward to seeing these episodes animated.

<< I’ll try and drop by and see you guys Friday, and I’ll definitely be around Saturday.>>

<< Also, you and I need to discuss the idea me and the guys have been percolating for the TMNT 25th Anniversary project!>>

Email ThisBlogThis!Share to TwitterShare to FacebookShare to Pinterest
Labels: Blast from the Past, development, Kids TMNT show, TMNT Volume 4